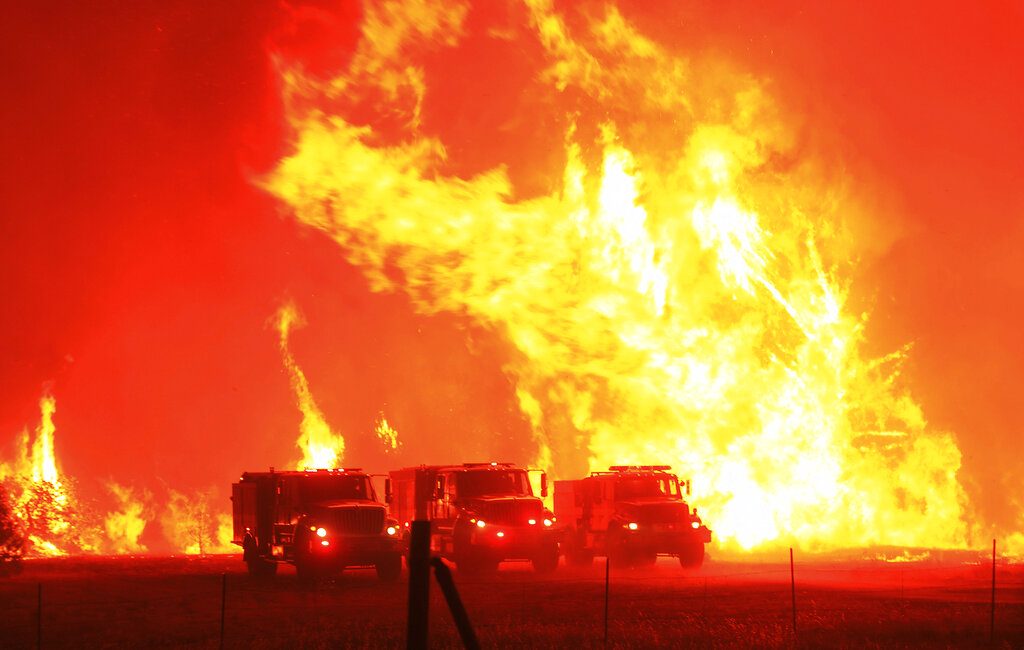 California staved off another round of rolling blackouts but faced a renewed threat Wednesday from a searing heat wave, raging wildfires and even a chance of thunderstorms and flooding in some southern areas.

Thousands of people were under evacuation orders or warnings as some 30 wildfires burned, many sparked by lightning strikes in recent days.

The blazes engulfed rural and forest areas near the San Francisco Bay Area, in Sonoma County in the wine country, near Salinas in Monterey County, around Oroville Dam north of Sacramento, in remote Mendocino County and near the Nevada state line north of Lake Tahoe. Several also were burning in northern coastline areas and in southern California.

Evacuations were ordered for all of Boulder Creek, including neighborhoods around Big Basin Redwoods, California’s oldest state park, as well as surrounding areas. Some 5,000 people live in Boulder Creek, a community high in the Santa Cruz mountains. The many windy, long, forested roads, some paved, some dirt, can easily become blocked during storms or fires. The orders specify which direction particular neighborhoods need to go to safely get out.

Gov. Gavin Newsom declared an emergency Tuesday because of the fires, easing the way to secure federal grants and also out-of-state firefighting help.

Hundreds of homes were threatened by several fires in the area and winds pushed the flames towards the city of Napa. Some 2,000 homes were under evacuation orders.

After warning Tuesday that as many as 2 million homes and businesses might be subject to rotating blackouts of an hour or more, the California Independent System Operator canceled its emergency declaration Tuesday night.

At a cooling center in Sacramento, Newsom applauded industries, businesses and residents for driving down energy usage but warned the state was in a “critical 48-hour period.”

“We’re doing everything in our power to understand the root causes of this,” said Newsom, who on Monday ordered an investigation into outages that occurred on Friday and Saturday.

The heat was expected to continue through Wednesday, bringing more triple-digit temperatures over many areas before a few days of slightly cooler weather set in. However, temperatures could begin rising again over the weekend and into next week, the National Weather Service warned.

In addition to heat, moisture from Hurricane Genevieve off the coast of Mexico could bring a chance of brief but heavy thunderstorms to some southern California desert and mountain areas.

Meanwhile, the wildfires spewed huge columns of smoke and made for unhealthy air, further adding to the misery especially in the midst of the coronavirus pandemic.

The fires could well hamper efforts to get the coronavirus pandemic under control, said John Swartzberg, an infectious disease expert and professor emeritus at UC Berkeley who has been consulting with firefighters in the state.

“If you get COVID and you’re being exposed to a lot of particulate matter from the fires, that’s going to certainly make COVID worse,” Swartzberg told the East Bay Times.

The fires also could increase the spread of COVID-19 because they are bringing together so many firefighters from around the state, he said.

“It’s a perfect recipe for what we don’t want to do in a pandemic,” Swartzberg said.