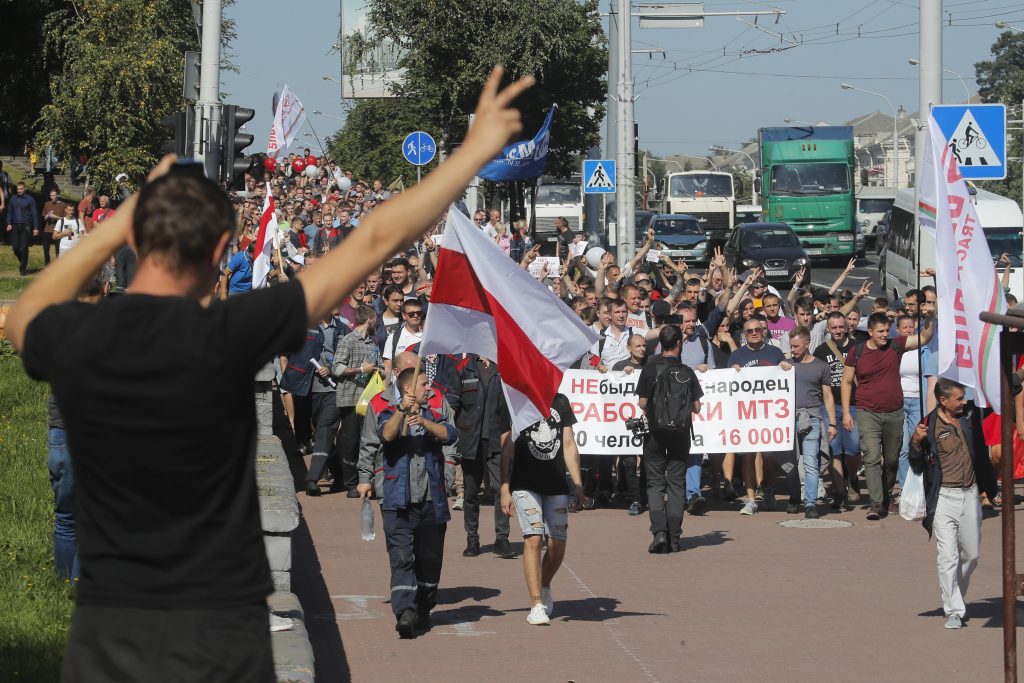 Workers heckled and jeered President Alexander Lukashenko on Monday as he visited a factory and strikes grew across Belarus, raising the pressure on the authoritarian leader to step down after 26 years in power.

On the ninth straight day of mass protests over the official results of the Aug. 9 presidential election that demonstrators say was rigged, Lukashenko flew by helicopter to a factory in the capital of Minsk to rally support, but he was met by angry workers chanting, “Go away!”

Lukashenko said the country could have a new presidential election, but only after approving an amended version of its constitution — an apparent bid to buy some time amid the growing political crisis.

He told the factory workers that those who intend to strike could leave if they want, but he added that the protests are ruining the economy and said the country would collapse if he steps down.
“Some of you might have got the impression that the government no longer exists, that it has tumbled down. The government will never collapse, you know me well,” the 65-year-old former state farm director shouted.

As he spoke, over 5,000 striking workers from the Minsk Tractor Plant marched down the streets of the city, joining an increasing number of state-controlled factories across the nation of 9.5 million in walking off the job.

Miners at the huge potash factory in Soligorsk also said they were joining the strike. The giant Belaruskali factory that accounts for a fifth of the world’s potash fertilizer output is the nation’s top cash earner.

The strikes follow a brutal dispersal of peaceful, post-election demonstrations last week that were met by rubber bullets, tear gas, clubs and stun grenades. At least 7,000 were detained by riot police, with many complaining they were beaten mercilessly. One protester was killed and hundreds were wounded.

The workers want Lukashenko to give way to Sviatlana Tsikhanouskaya, the leading opposition candidate in the election.

“Lukashenko is a former president. He needs to go,” said Sergei Dylevsky, the leader of the protest at the Minsk Tractor Plant, adding that Tsikhanouskaya is “our president, legitimate and elected by the people.”

The official results of the election gave Lukashenko 80% of the votes and Tsikhanouskaya only 10%, but the opposition claimed the outcome was falsified. Tsikhanouskaya has cited reports from precincts around the country showed her winning 60%-70% of the vote.

The 37-year-old former teacher left for neighboring Lithuania on Aug. 11 under what her associates described as pressure from law enforcement officials. Her husband, an opposition blogger who had hoped to run for president, has been jailed since May, and she had replaced him on the ballot.

In a video statement on Monday, Tsikhanouskaya said she was prepared to step in.

“I’m ready to take on the responsibility and act as a national leader in order for the country to calm down, return to its normal rhythm, in order for us to free all the political prisoners and prepare legislation and conditions for organizing new presidential elections,” she said.

After the police crackdown and reports of abuse provoked widespread anger, the authorities backed off, allowing big weekend protests and releasing many of the detainees. The Interior Ministry said that just 122 detainees were still in custody as of Monday.