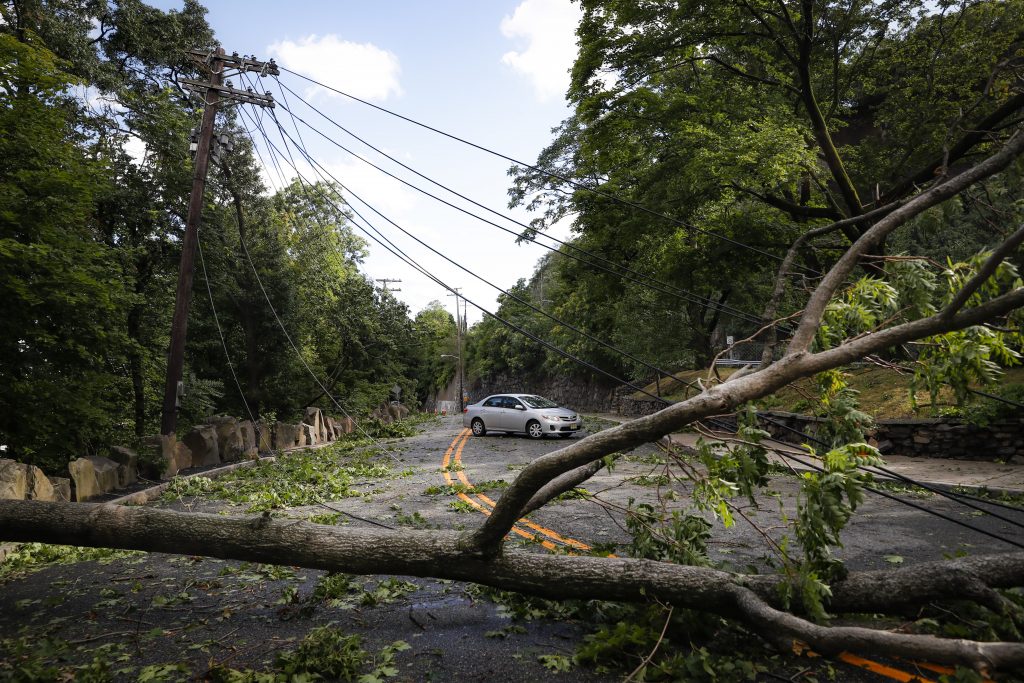 Heavy rains and high winds swept across New Jersey on Tuesday as Tropical Storm Isaias roared to the north, leaving behind power outages, suspended train service and reports of tornadoes.

A state of emergency remained in effect and Gov. Phil Murphy said during a briefing that the western part of the state would likely get the most rain while the strongest winds would hit the shore.

Strong winds blew down trees and fell power lines in Lakewood and the surrounding towns of Toms River and Jackson. Thousands of homes were left without power, an estimated 15,000 in the township and over 147,000 throughout Ocean County. In light of the high volume of downed lines and extent of repairs needed, Jersey Central Power and Light (JCP&L) had not posted data as to when areas would be back up and running. Unofficial estimates predicted that in many neighborhoods electric would not be restored until nighttime or possibly the next day.

A trained spotter saw an apparent tornado in the Cape May County community of Strathmere, the National Weather Service said. There were no immediate reports of serious injuries or damage, although some trees were reportedly knocked down.

The storm disrupted ground travel across the state. New Jersey Transit suspended all rail service Tuesday afternoon due to overhead wire and signal issues, and downed trees blocked lanes on the Garden State Parkway in Upper Township and the New Jersey Turnpike in Edison.

A 35 mph speed restriction was in effect at the George Washington Bridge due to high winds, and NY Waterway ferry service was suspended at noon.

Newark Liberty International reported some flight cancellations Tuesday morning, but the airport was experiencing only minor departure and arrival delays by afternoon, according to the Federal Aviation Administration.

The state’s utilities were reporting more than 1 million homes and businesses without electricity Tuesday afternoon. Crews were staging to restore service once the worst of the weather had passed.

Weather forecasters were predicting 45 to 55 mph winds with gusts to 70 mph.

Motorists were told to stay off the roads unless “absolutely necessary.” The New Jersey Turnpike and Garden State Parkway banned car-pulled trailers and motorcycles.

All state offices were closed and nonessential state government workers were told to stay home.

Gov. Murphy said he was hoping the day would mostly be a “washout.”