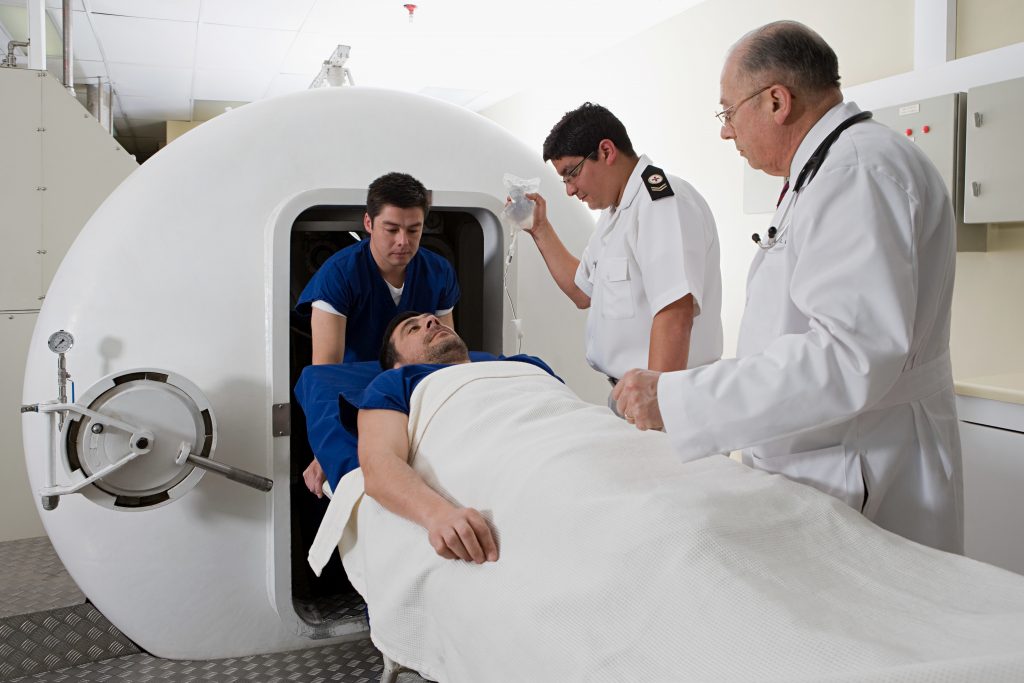 As a New York University medical researcher who works once a week in an emergency room, Dr. David Lee had the luxury of time to think like a scientist while also treating coronavirus patients whose lungs kept giving out. In every case, he saw the same thing: Their blood was starved of oxygen.

One day an idea hit him: Could hyperbaric oxygen therapy, best known for treating divers with the bends, help stave off the need for ventilators and perhaps reduce deaths?

Physiologically it made sense to him, but he soon learned it was also complicated. The therapy, which involves delivering 100% oxygen straight to patients inside a pressurized chamber, is often met with skepticism by the wider medical community because fringe supporters have long touted it as a virtual cure-all without scientific evidence.

So much so that the U.S. Food and Drug Administration wrote a consumer update a few years ago, explaining that the therapy is only approved for 13 types of treatment, ranging from burns to deep wounds and carbon monoxide poisoning. The agency warned patients not to be misled by claims on the Internet that it works for conditions such as cancer or autism.

Still, with medical teams worldwide having little success at saving lives despite throwing everything they had at COVID patients — testing old drugs, trying new ones — Lee believed doctors should be more open to exploring different types of treatments. He brought his theory to Dr. Scott Gorenstein, a colleague at NYU Winthrop Hospital on Long Island with a decade of experience in the field.

Though the treatment is non-invasive, with a long history of safety, both men knew they faced major obstacles. Chief among them: finding funding, and overcoming skepticism about the treatment fueled by hyperbaric spas.

“If we were to promote hyperbaric without a rigorous scientific trial, because of the fringe community that’s already doing that, the likelihood that it would be accepted by mainstream medical communities is close to zero,” said Gorenstein.

Within two weeks, the doctors had approval from an NYU institutional review board for a small, case-control trial that would allow them to compare COVID-19 patients treated with hyperbarics to a control group matched with similar characteristics, such as age, gender, health conditions and oxygen requirements, that did not get it.

Twenty hyperbaric patients, predominantly men age 30 to 79, received up to five 90-minute treatments during the month-long study. Gorenstein said almost all experienced relief of symptoms once sealed inside the clear tube, similar in shape to the old iron lungs once used to treat polio. Some went from having unresponsive “deer-in-the-headlights” dazes to being alert and engaged, while others reported being able to sleep afterward for the first time in days. Eighteen of those patients recovered and were discharged within days or weeks.

Two people died, and the death of one of them halted the study and prompted a hospital safety assessment. It concluded hyperbaric treatment was not the cause, Lee said. The FDA also was asked to review the case, but he said there has not yet been a response.

The control group saw a significantly higher rate of intubations, deaths, and long-term hospitalizations. However, both Gorenstein and Lee stressed that the trial, which will soon be published, was too small to draw any solid conclusions.

“What we’ve been able to do, I think, is demonstrate that this therapy deserves to be studied in a large way,” Gorenstein said, adding the next step would be to secure funding for a larger, randomized control trial at multiple centers.

Scientists remain baffled by the complex nature of COVID-19, its range of victims, its acute and long-haul symptoms, and even the accuracy of tests used to confirm infections. With more than 660,000 people succumbing globally — nearly a quarter of them in the U.S. — there’s been little time for robust scientific studies in the race to find effective treatments.

Initial fanfare over the old antimalarial drug hydroxychloroquine and the anti-viral remdesivir quickly died down after it became clear neither was a silver bullet. There’s also been excitement over steroids, experimental convalescent plasma, and even antibodies from a Belgian llama named Winter.

What many of those treatments do have is financial backing from pharmaceutical companies, giving them an advantage over hyperbaric and other non-drug therapies. Oxygen, however, is not something that can be patented, and doctors say there are no big profits to be made from using the pressurized pods.

One of the biggest risks in hyperbarics is transporting patients to and from the chamber, given how sick they are and their absolute dependence on supplemental oxygen. There are also questions about how the treatment might affect blood-clotting disorders or if too much oxygen could lead to toxicity and, possibly, seizures.

“My feeling about any kind of intervention, it’s really important that that be done through clinical trials. If such data existed, then perfect, it’s worth a try,” said Mitchell Levy, medical director of the intensive care unit at Rhode Island Hospital and a professor of medicine at Brown University.

“But we want to be really careful that we’re not just acting out of desperation, giving things that may be harmful … or spending a lot of money on ineffective therapies. And that’s the challenge of entering this uncharted territory,” Levy said

The treatment was first given to a handful of COVID-19 patients in Wuhan, China, with promising results. A study in Sweden plans to recruit 200 participants. Israel, France and Italy are among others trying it. It’s also being tested out at several U.S. hospitals, including at the Opelousas General Health System in Louisiana.

Kathy Fuselier, 62, who works in the pharmacy there, said she felt it helped her. “I didn’t have to be put on the vent,” she said. “Came close, but didn’t need the vent.”

With a virus as mysterious and cunning as COVID, Lee said it’s essential to raise questions. But he added it’s just as important to keep an open mind.

“There’s a lot of people trying to find solutions,” he said, adding hyperbarics could just be one piece of a larger puzzle. “This is not going to be an end-all, be-all.”