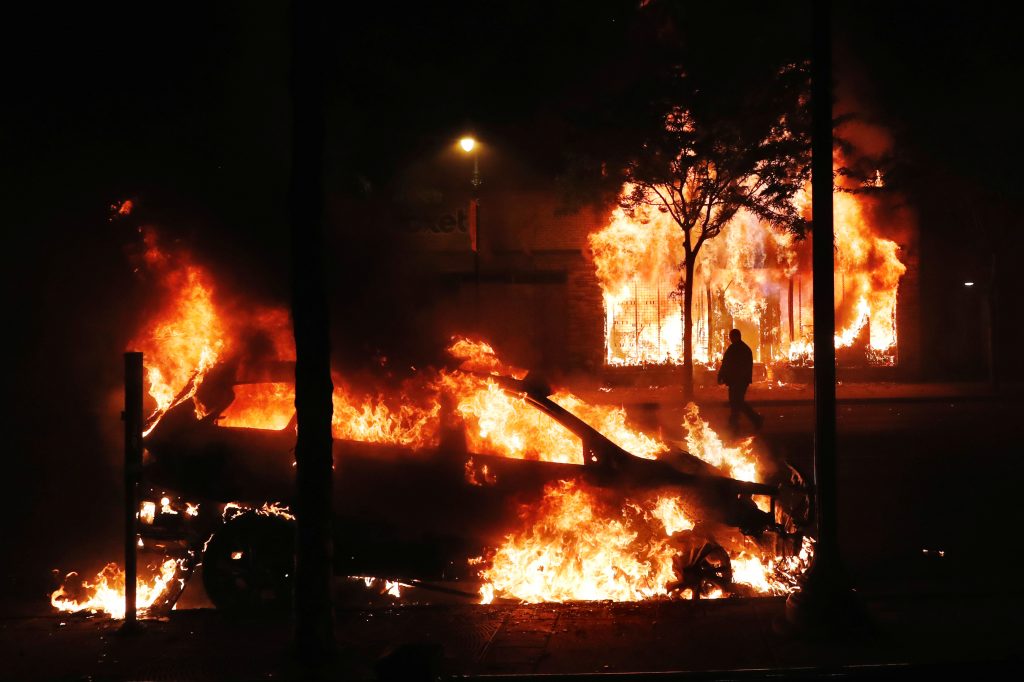 Police say a man captured on surveillance video breaking windows at a south Minneapolis auto parts store in the days after George Floyd’s death is a Hell’s Angels member who was bent on stirring up social unrest.

Dubbed “Umbrella Man” for an all-black getup that included hood, gas mask and black umbrella, police say the man’s actions soon led to an arson fire that was the first of several that transformed peaceful protests into chaos.

“This was the first fire that set off a string of fires and looting throughout the precinct and the rest of the city,” Minneapolis police arson investigator Erika Christensen wrote in a search warrant affidavit this week, the Star Tribune reported.

Minneapolis police spokesman John Elder told The Associated Press on Tuesday that the investigation remains open and active and that he could not confirm the name of the person involved.

The riots spread to other parts of Minneapolis and St. Paul and caused an estimated $500 million in damage. At least two people died — one a man who was fatally shot at a Minneapolis pawnshop and another whose burned body was found in the ruins of another pawnshop.

Floyd, a handcuffed Black man, died May 25 after a white Minneapolis police officer pressed his knee against Floyd’s neck for nearly eight minutes. A livestreamed video two days later, on May 27, showed “Umbrella Man” walking along the front of an AutoZone store and breaking out the windows with a sledgehammer. Some protesters confronted the man and asked him to stop.

Before that, the man, who was carrying a black umbrella, spray-painted expletives on the doors, police said. The AutoZone fire was the first that firefighters responded to during the civil unrest, Assistant Minneapolis Fire Chief Bryan Tyner said Tuesday.

In the affidavit, Christensen wrote that she watched “innumerable hours” of videos on social media platforms trying to identify the suspect with no luck. Finally, a tipster emailed the Minneapolis Police Department identifying the man as a member of the Hell’s Angels biker gang who “wanted to sow discord and racial unrest by breaking out the windows,” according to the affidavit.

An investigation found that the man was also an associate of the Aryan Cowboy Brotherhood, a white supremacist prison and street gang based mainly in Minnesota and Kentucky. Several of its members were present in Stillwater, in eastern Minnesota, late last month when a Muslim woman was confronted by a group of men wearing white supremacist garb.