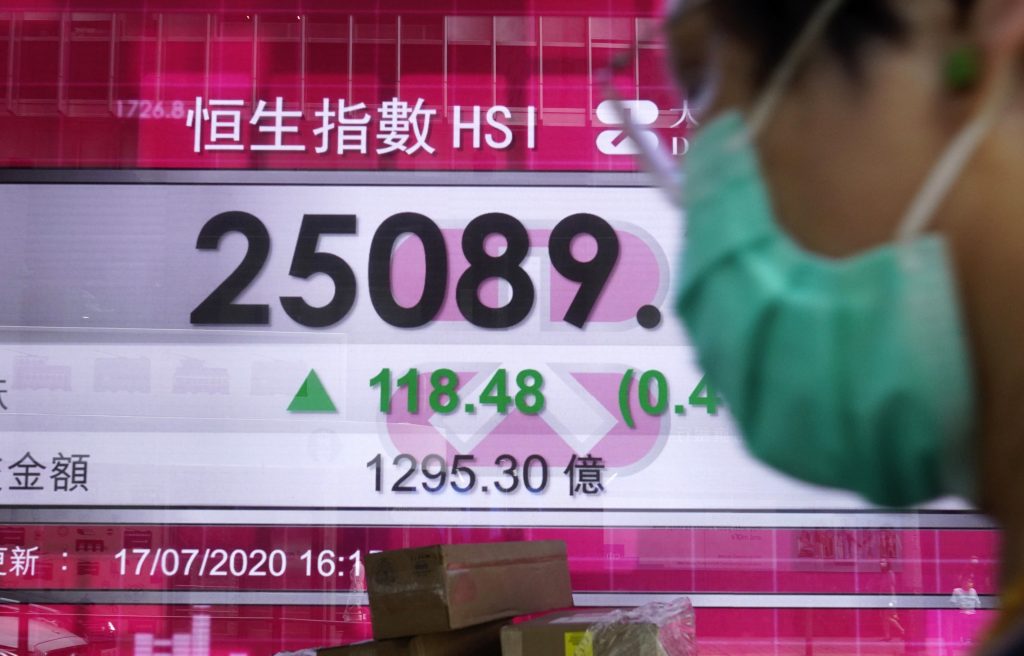 Global shares were mixed in directionless trading Monday as the number of coronavirus cases soared in the U.S. and investors cautiously eyed the summit of European leaders discussing the pandemic crisis.

Hayaki Narita, at the Asia and Oceania Treasury Department of Mizuho Bank, said rising numbers of confirmed infections in the U.S., trade tensions between the U.S. and China, and the EU policy impasse were all adding to market risks.

“But with increasing dangers of political missteps and policy fumbles, the question is whether things could start to come undone in a more alarming manner,” said Narita.

Talks between European Union leaders failed to reach an agreement on an unprecedented 1.85 trillion-euro ($2.1 trillion) EU budget and a coronavirus recovery fund to tackle the crisis. They were meeting again Monday on the fourth day of a summit that began Friday.

Japan reported trade data showing exports fell 26.2% in June from a year earlier. Its trade-reliant economy has plunged into recession and its outbreaks of COVID-19 cases, while still fewer than the hardest-hit nations, have been growing recently, especially in Tokyo.

“Asia markets are looking to a muted start to the week, caught between growing COVID-19 cases around the globe while looking to the series of earnings releases this week,” said Jingyi Pan, market strategist at IG in Singapore.

Signs that an outbreak of the coronavirus has spread to a second city in northwestern China’s Xinjiang, even as authorities close off communities and impose travel restrictions in the regional capital Urumqi, further darkened the mood.

In India, a new record surge of 40,425 reported cases in the past 24 hours took the nation’s cumulative total to more than 1.1 million. India also had another 681 deaths, taking its total fatalities to 27,497.

Corporate earnings and U.S. unemployment data are expected to draw attention this week, according to analysts.