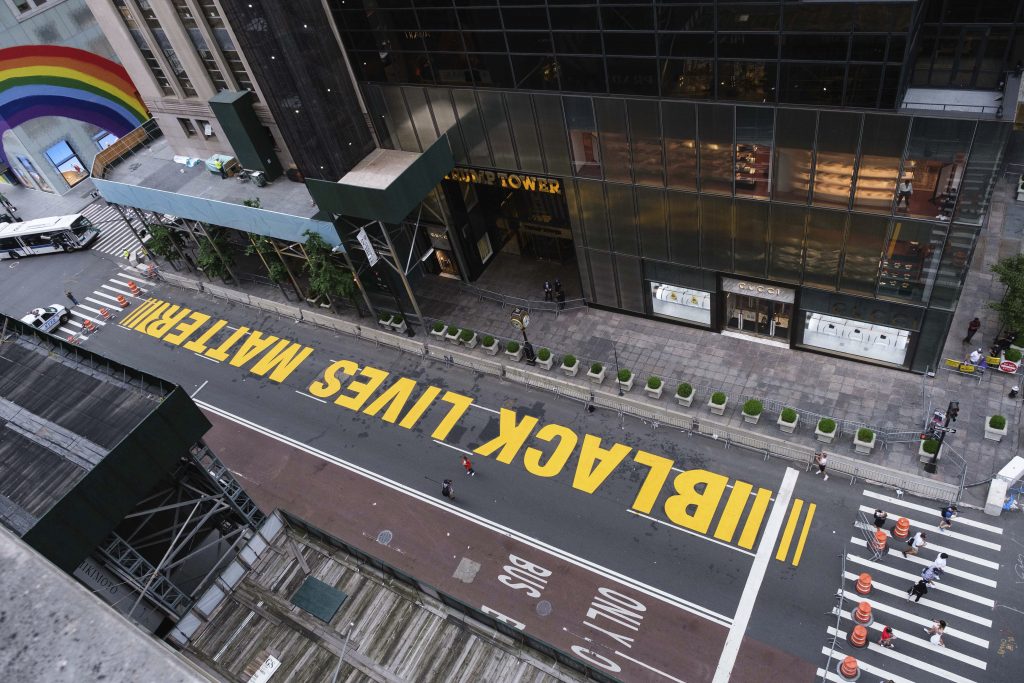 A “Black Lives Matter” mural painted on the street in front of President Donald Trump’s namesake New York City tower has quickly become a target for vandalism, defaced with bucketfuls of paint three times in less than a week.

In the latest incident, two African-American women were arrested around 3 p.m. Saturday after police said they poured black paint on the block-long mural outside Trump Tower on Manhattan’s chic Fifth Avenue.

Bystander video showed police officers surrounding one of the women as she rubbed the paint on the mural’s bright yellow letters and screamed: “they don’t care about Black lives” and “refund the police.”

One of the officers slipped on the paint and tumbled to the ground, sustaining injuries to his head and arm, police said. He was listed in stable condition at Bellevue Hospital.

A police department spokesperson said the women’s names and information on possible charges against them weren’t immediately available.

The city’s largest police union, the Police Benevolent Association, tweeted: “Thankfully our brother will be OK, but this nonsense needs to stop. Our city is in crisis. Paint on the street helps no one.”

Saturday’s vandalism happened less than 24 hours after three people were caught on surveillance video smearing blue paint on the mural around 4 p.m. Friday while a woman littered it with flyers that referenced the recent shooting death of a 1-year-old boy in Brooklyn, police said.

Officers found the trio nearby a short time later with blue paint on their hands and clothing, police said. According to the video of the incident, one of them was wearing an “All Lives Matter” shirt as well as other apparel indicating support for President Donald Trump.

They were arrested, charged with criminal mischief and released with a order to appear in court at a later date.

The woman, 64, was issued a criminal court summons for illegal posting of flyers. A photo provided by police showed one of the flyers designed like an internet meme, with a close-up picture of 1-year-old shooting victim Davell Gardner Jr. under the words “DID MY LIFE MATTER” followed by a crying emoji.

Next to Gardner’s picture was a message written in red marker: “I wasn’t killed by a cop. I was killed by a Black person. Where’s BLM?”

Police have released surveillance video showing two men running and pointing guns who are believed to be suspects in the July 11 shooting. Witnesses say they jumped out of a car and fired multiple shots at the group before driving away. No arrests have been made.

Meanwhile, police are continuing to look for a man in black shorts and a dark blue T-shirt who was seen splashing red paint on the “Black Lives Matter” mural around noon on Monday.

The words “Black Lives Matter” have been painted on streets in New York and elsewhere in recent weeks to show support for the movement demanding justice and reforms after the recent police killings of George Floyd and other Black people.

Trump said last month in a tweet that affixing the words to Fifth Avenue in front of his building would denigrate “this luxury Avenue.”