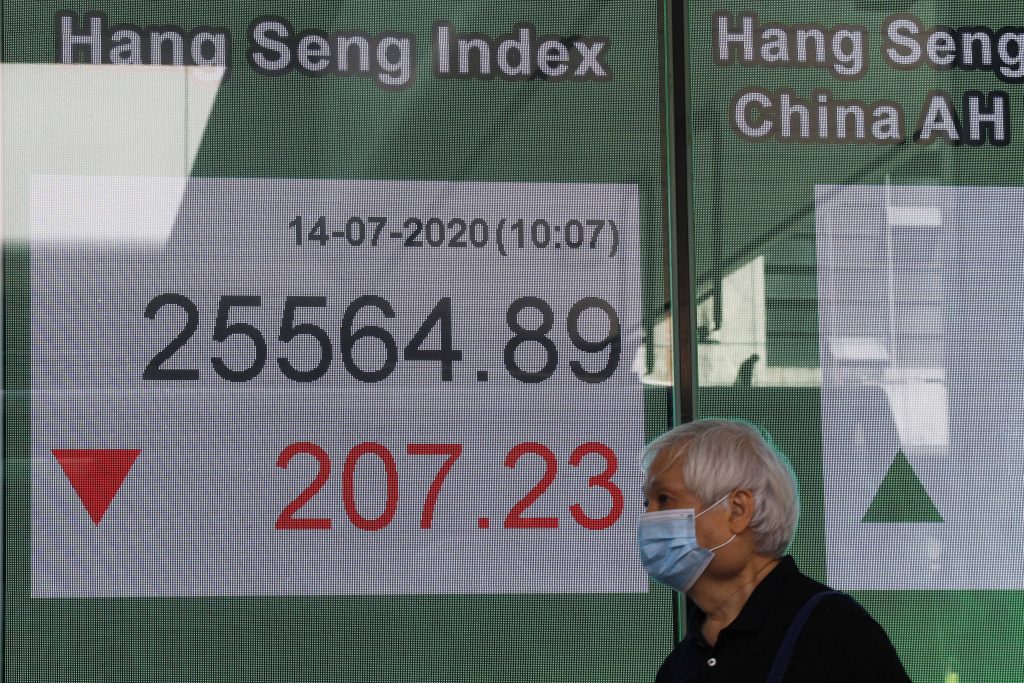 Shares fell in Asia on Tuesday as skepticism set in about the recent upward momentum in global markets given rising confirmed coronavirus cases and percolating tensions between the U.S. and China.

The White House’s decision to reject nearly all Chinese maritime claims in the South China Sea added to investor jitters. The world’s two largest economies have been sparring over everything from the pandemic to human rights.

One indicator of how bad the regional damage could get came from the advance estimate of Singapore’s gross domestic product, or GDP, for the second quarter. It showed a 12.6% year-on-year contraction, confirming Singapore’s worst recession ever.

“It is also the weakest result among our estimates for most Asian economies,” said Prakash Sakpal, a senior economist at ING, noting that the number was dismal, even though “Singapore wasn’t as badly affected by the COVID-19 pandemic as some of its Asian neighbors.”

Wall Street is getting a painful reminder of the threat the pandemic poses to the economy, as reopenings bring on fresh spikes in coronavirus cases.

The S&P 500 fell 0.9%, with all the losses accumulating in the last hour of trading after California said it will extend closures of bars and indoor dining across the state, among other restrictions. It’s one of many states across the U.S. West and South where coronavirus counts are accelerating and threatening the budding recovery that just got under way for the economy.

The announcement from California, which accounts for nearly 15% of the country’s economy, combined with the escalation by the White House of its tensions with China to knock the market down from its earlier gain of 1.6%.

Technology stocks took the hardest hits, highlighted by Microsoft’s swing from an early gain of 1% to a loss of 3.1%. It’s a sharp step back for tech-oriented giants, which have been cruising higher through the pandemic on bets that they can keep growing almost regardless of the economy.

“There’s an increasing sense that the recovery from the virus-related shutdown is going to be more drawn out, more uneven than maybe the market was looking for,” said Willie Delwiche, investment strategist at Baird. “And you add on top of that a number of tech companies that had run up tremendously over the past couple of weeks, so there’s a little bit of shaking out there as well.”

In a signal that investors are downgrading their expectations for the economy, Treasury yields fell and smaller stocks did worse than their larger rivals. The Russell 2000 index of small-cap stocks lost 1.3%.

The volatility struck markets just as corporate America is set to tell Wall Street how badly the pandemic hit their bottom lines.

Several of the country’s biggest banks are slated to report their results Tuesday, including JPMorgan Chase, and the expectations are almost universally dreadful across the S&P 500.

Analysts say the biggest U.S. companies likely saw their earnings per share plummet nearly 45% from April through June, compared with year-ago levels. That would be the sharpest drop since the depths of the Great Recession in 2008, according to FactSet.

Investors are expecting banks, which traditionally kick off each earnings season every three months, to say they’ve had to set aside billions of dollars to cover loans potentially going bad due to the pandemic-caused recession, for example.

For energy stocks, whose earnings reports get going later in July, Wall Street expects profits to have disappeared completely. Exxon Mobil is expected to report its second losing quarter in a row.

The hope is that the economy and declines in corporate profits bottomed out in the spring and will continue to improve. The job market, retail sales and other measures of the economy have already begun showing some budding improvement.

If governments continue to bring back restrictions to slow the outbreak’s resurgence, it could choke off the fragile economic improvements just as they get under way.

“The most important thing is COVID-19 data,” said Darrell Cronk, chief investment officer of Wells Fargo Wealth and Investment Management. “That’s going to affect whether we have to slow down or stop economic activity in the back half of the year.”