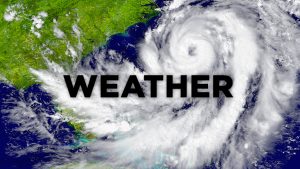 With Fay’s track expected to impact N. Y.C., NWS is forecasting moderate to heavy rain to move into the area early Friday morning, continuing throughout the afternoon before tapering off around midnight Saturday. A total of 1 to 2 inches of rain is forecast with this system, with locally higher amounts of 2 to 4 inches possible. Severe thunderstorms cannot be ruled out with this system. High winds are also in the forecast on Friday, with sustained winds 35 mph to 45 mph (56 to 72 kph) and gusts up to 50 mph (80 kph). Winds are expected to taper off overnight Friday into early Saturday morning. There is also the potential for high surf on Friday, with a high risk of dangerous rip currents on Friday and Saturday.

“We are working closely with National Weather Service to monitor Tropical Storm Fay and the potential impacts it may have to New York City,” said N.Y.C. Emergency Management Commissioner Deanne Criswell. “This storm is expected to bring strong winds and heavy rain tomorrow, so make sure you secure loose objects like garbage cans and patio furniture, charge cell phone batteries and other devices, and take other necessary precautions.”

The New York City Emergency Management Department is prepared for the effects of Tropical Storm Fay, and will coordinate a virtual Emergency Operations Center (EOC) with City agencies and partners to monitor the forecast and rapidly respond to any potential impacts of the storm. The City’s Flash Flood Emergency Plan is activated to help mitigate potential flash flooding and ensure a quick, effective, and coordinated response to any flash flood events that do occur. Flash flooding can occur with little or no warning due to the large number of paved surfaces across the city. These surfaces do not allow rainwater to be absorbed into the ground and can result in storm drains often being overwhelmed, causing localized flooding.

The Department of Buildings has issued an advisory for property owners, contractors and crane operators to take precautionary measures to secure their construction sites, buildings, and equipment in preparation for strong winds associated with Tropical Storm Fay. The department will perform random spot-check inspections of construction sites around the city and will issue violations and Stop Work Orders, where necessary, if sites are not secured.

Fay is the earliest sixth-named storm on record, according to Colorado State University hurricane researcher Phil Klotzbach. The previous record was Franklin on July 22, 2005, Klotzbach tweeted.

Two named storms formed before the official June 1 start of the hurricane season. None of this season’s previous five named storms strengthened into hurricanes.