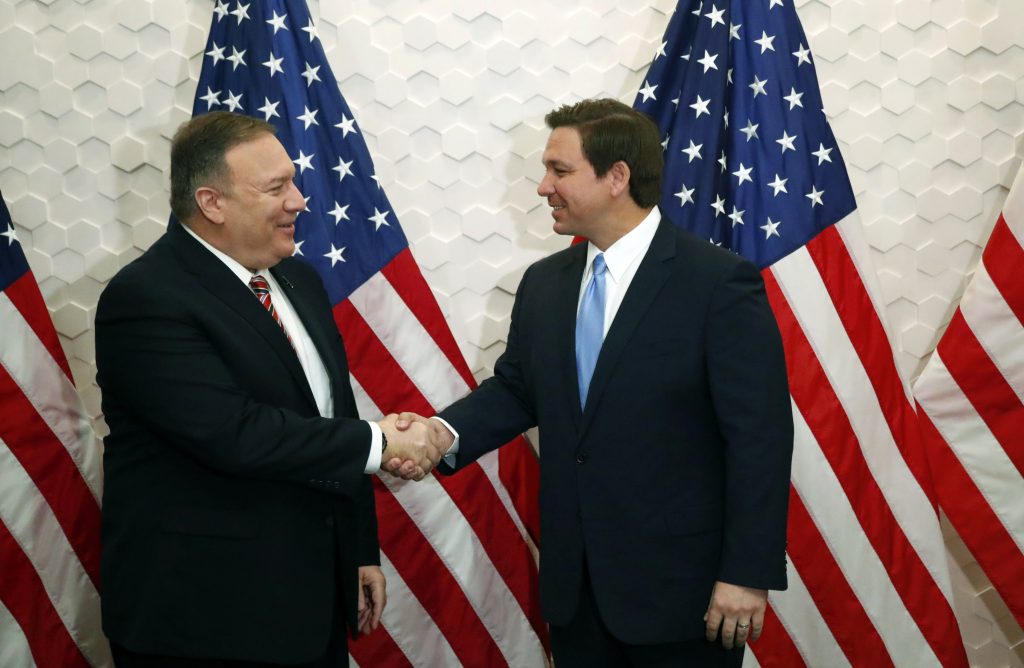 Agriculture Secretary Sonny Perdue tromped through a strawberry festival in central Florida, detailing the government’s new trade pact. Secretary of State Mike Pompeo talked about foreign policy at a roundtable in south Florida. Environmental Protection Agency Administrator Andrew Wheeler toured parts of Michigan and Wisconsin, where he boasted of the Trump administration’s efforts to clean up the Great Lakes.

And just this past week, Interior Secretary David Bernhardt was listed as a headliner along with White House counselor Kellyanne Conway, Donald Trump Jr. and Kimberly Guilfoyle, a top fundraiser for the president, at an event in Rapid City, South Dakota, where ticket prices started at $250, according to an independent watchdog group, Public Employees for Environmental Responsibility.

With President Donald Trump confronted by skyrocketing joblessness and the coronavirus pandemic as he campaigns for reelection against Democrat Joe Biden, members of his Cabinet are busy making time in pivotal states. They are carrying a message to voters about what the Trump administration is doing for them. At the same time, there are questions about whether these agency heads are running afoul of a law meant to bar overt campaigning by federal officials on the taxpayer tab.

These are states in renewed focus after Trump’s narrow 2016 victory. Recent polls in states such as Wisconsin, Michigan and Pennsylvania show Biden leading. The lesson of four years ago is crucial, though. Nearly every poll in the three states showed Democrat Hillary Clinton ahead of Republican Trump, before Trump’s base came together in the final weeks of the campaign.

Cabinet-level leaders have come to Florida alone more than 30 times this year. Michigan, Pennsylvania, Wisconsin and Arizona have also seen visits from agency and administration chiefs discussing federal funding and initiatives for local interests — and talking up President Trump.

Trump is hoping for an energized base to buoy his prospects for a second term. His recent rhetoric seems to reflect that strategy, as he stokes divides over racial injustice and the coronavirus outbreak.

It can be hard to spot any local impact that a housing or a health secretary may have on a presidential race when they are in town. But there can be an effect, said Aubrey Jewett, a political science professor at the University of Central Florida, who has been studying presidential politics in the battleground state.

Cabinet secretaries usually “aren’t generating the same kind of buzz. But it doesn’t mean that what they do is not important both for policy and also politics for their President,” Jewett said.

A Trump campaign spokesperson did not respond to questions about the Cabinet members’ trips.

A Washington bigwig showing up with assurances on federal policies most vital to Orlando, Florida, or Milwaukee is usually enough to earn an administration a wave of favorable comments, columns and tweets from local leaders.

In March, for example, when Perdue went to the strawberry festival in Plant City, in central Florida’s Interstate 4 corridor, he talked about the new U.S. trade pact with Mexico and Canada and spoke of the importance of the farming community.

Afterward, the president of the Florida Strawberry Growers Association, Kenneth Parker, said he was appreciative of “the administration’s commitment … to move forward in helping us in ways to compete.”

When the EPA’s Wheeler was in Michigan and Wisconsin last month, he described the administration as a friend of an initiative to clean up the Great Lakes. Never mind repeated attempts to reallocate money for the Obama-era program. GOP lawmakers persuaded President Trump, while riding to a Michigan rally last year, to ease up on trying to starve the Great Lakes effort, which is popular across the region, and champion it instead.

“Let’s just say we were happy to see him come around on that,” said Laura Rubin of the Healing Our Waters-Great Lakes Coalition, which lobbies for the initiative.

And so this spring and summer, Wheeler and the EPA boast of millions of dollars the agency has doled out for Great Lakes regional projects such as cleaning up toxic sites and curbing farm nutrient runoff that feeds harmful algae blooms.

Wheeler drew praise during the visits from Republican members of Congress and leaders of business groups. Notably absent were environmentalists, who accused Trump and Wheeler, a former coal lobbyist, of taking credit for actions by previous administrations and ignoring the gutting of environmental and public health protections.

Cabinet secretaries hitting the road to talk up a president’s record in an election year is a political norm. Donald K. Sherman, deputy director of the Citizens for Responsibility and Ethics in Washington watchdog group, said it can be tough to track the officials closely enough to know whether they are sticking to the Hatch Act, which is meant to bar obvious campaigning by federal officials with taxpayer money.

But with the White House rejecting recommendations from the Office of Special Counsel to presidential adviser Conway for violating the act by using her office to talk down Democrats, Sherman said he is not sure Trump Cabinet members deserve the benefit of the doubt when it comes to staying within the law on their stops in select states.

“It’s obvious that the administration is doing this for a political reason,” Sherman said. “What’s not obvious is if they’re doing this within the contours of the law or outside of it.”

Interior Department spokesmen did not respond to questions this past week about the Rapid City event, which took place the evening before Bernhardt helped open for President Trump at a fireworks show at Mount Rushmore, Public Employees for Environmental Responsibility said. It was unclear whether the Trump campaign or the federal government paid for Bernhardt’s costs on the trip.

Spokespeople for two Cabinet-level agencies, the Interior Department and the EPA, did not specifically answer questions about whether they were coordinating such trips and funding announcements with President Trump’s advisers or with his campaign staff. They said administration officials are doing their job by traveling and are not favoring any areas.