Israel Netanyahu to U.S. Envoy: Some Issues Are Too Serious to Wait Until After Corona
Israel 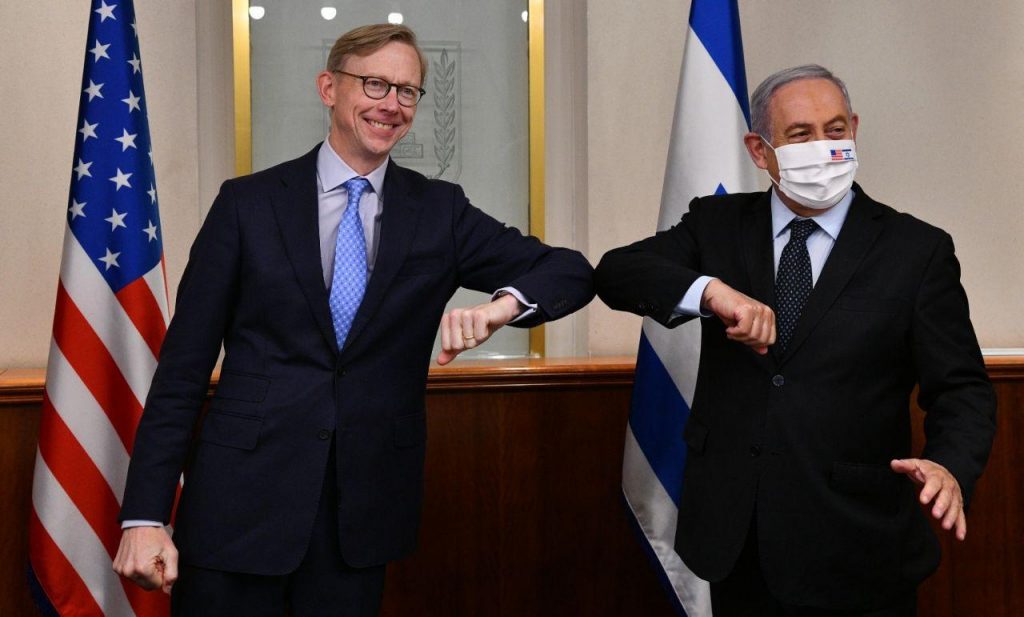 Hook was in Israel as the two countries have been working closely together to extend the U.N. arms embargo on Iran, which expires in October.

Secretary of State Mike Pompeo is expected to discuss the extension of the embargo in the U.N. Security Council later on Tuesday.

Hook told Netanyahu that Israel and the U.S. “see eye to eye” on extending the arms embargo.

“In four short months, Iran will be able to freely import fighter jets, attack helicopters, warships, submarines, large-caliber artillery systems and missiles of certain ranges,” Hook said. “Iran will then be in a position to export these weapons and their technologies to their proxies, such as Hezbollah, Palestine Islamic Jihad, Hamas, Shia militia groups in Iraq, Syria militant networks in Bahrain and to the Houthis in Yemen.”

At a joint press conference with Hook, Netanyahu made a veiled retort to his senior coalition partner, Benny Gantz.

“We have serious issues to discuss – they are so serious that they cannot even wait for COVID-19.”

A day earlier, Gantz said that the Israeli government should deal exclusively with the coronavirus pandemic and related economic crisis, adding that everything else “can wait” until afterwards.

Gantz made the comments during a meeting with U.S. envoy Avi Berkowitz and U.S. Ambassador to Israel David Friedman on the sovereignty plan. Gantz said July 1, the first day the sovereignty plan can be brought to the government, is not a “sacred day,” and that the move can be pushed off till after the coronavirus crisis.