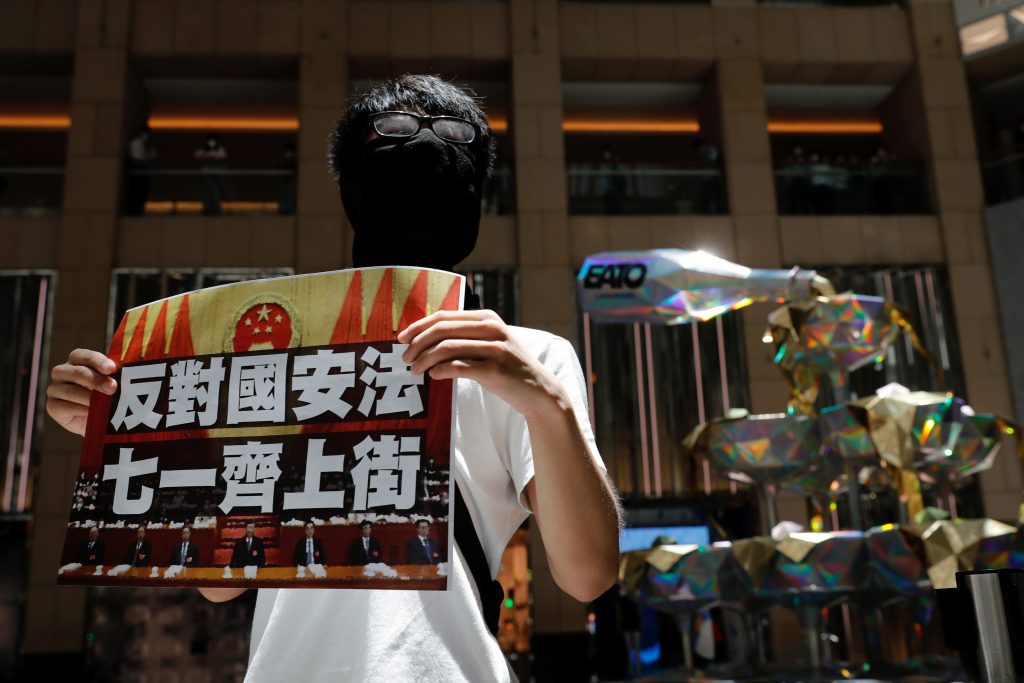 China approved a contentious national security law that will allow authorities to crack down on subversive and secessionist activity in Hong Kong, a move many see as Beijing’s boldest yet to erase the legal firewall between the semi-autonomous territory and mainland China’s authoritarian Communist Party system.

Tam Yiu-Chung, Hong Kong’s sole representative to the Standing Committee of the National People’s Congress, confirmed to reporters Tuesday that the law had been passed. He said punishments would not include the death penalty, but did not elaborate on further details such as whether the law could be applied retroactively.

“We hope the law will serve as a deterrent to prevent people from stirring up trouble,” Tam said. “Don’t let Hong Kong be used as a tool to split the country.”

Passage of the law came amid warnings and criticism both in Hong Kong and the international community that it will be used to curb opposition voices in the Asian financial hub. The U.S. has already begun moves to end special trade terms and others dispensations given to Hong Kong after the former British colony was handed over to Chinese rule in 1997.

The government has said the legislation is aimed at curbing subversive, secessionist and terrorist activities, as well as foreign intervention in the city’s affairs. It follows months of anti-government protests in Hong Kong last year that at times descended into violence.

Critics say it is the most significant erosion to date of Hong Kong’s British-style rule of law and the high degree of autonomy that Beijing promised Hong Kong would enjoy at least through 2047 under a so-called “one country, two systems” framework.

After the law passed, prominent Hong Kong pro-democracy activists Joshua Wong, Agnes Chow and Nathan Law issued statements on social media saying they would withdraw from the pro-democracy organization Demosisto. Wong said “worrying about life and safety” has become a real issue and nobody will be able to predict the repercussions of the law, whether it is being extradited to China or facing long jail terms.

Demosisto then announced that it was disbanding, saying the loss of top members made it difficult to continue.

More than a hundred protesters gathered at a luxury mall in Hong Kong’s Central business district, chanting slogans including “Free Hong Kong, Revolution Now,” with several holding up a flag representing an independent Hong Kong as well as posters condemning the law.

Ahead of the law’s passage, the Trump administration said Monday it will bar defense exports to Hong Kong and will soon require licenses for the sale of items to Hong Kong that have both civilian and military uses. The administration has warned for weeks that if the law was passed, it would take action to end special U.S. trade and commercial preferences Hong Kong has enjoyed.

“The United States is forced to take this action to protect U.S. national security,” Secretary of State Mike Pompeo said in a statement. “We can no longer distinguish between the export of controlled items to Hong Kong or to mainland China. We cannot risk these items falling into the hands of the People’s Liberation Army, whose primary purpose is to uphold the dictatorship of the (ruling Communist Party) by any means necessary.”

The U.S. Senate on Thursday unanimously approved a bill to impose sanctions on businesses and individuals — including the police — that undermine Hong Kong’s autonomy or restrict freedoms promised to the city’s residents.

Britain has said it could offer residency and possible citizenship to around 3 million of Hong Kong’s 7.5 million people.

China has denounced all such moves as gross interference in its internal affairs and Foreign Ministry spokesperson Zhao Lijian on Monday said Beijing has decided to retaliate with visa restrictions on “U.S. personnel who perform badly on Hong Kong related issues.”

Hong Kong leader Carrie Lam had declined to confirm passage of the law earlier Tuesday while the Standing Committee was still meeting.

Once the law is passed, “the Hong Kong government will announce it and promulgate it for implementation here, and then I and my senior officials will do our best to respond to everyone’s questions, especially regarding the enforcement of this national law,” Lam said.

Government critics as well as Hong Kong’s legal establishment has said the territory’s legal statutes already account for most of the concerns the law purports to address.

They say Beijing is determined to use the law to pursue political opponents, including possibly trying them in mainland courts under Communist Party control. They have questioned the legal basis on which China proceeded with the legislation, saying it undermines the Basic Law, Hong Kong’s mini-constitution.

An earlier attempt to pass the law in 2003 was dropped after hundreds of thousands of people marched in the streets against it.

China for years had put off another such effort but party leader Xi Jinping has increasingly sought to strengthen Beijing’s hand in the territory in keeping with his tightening of control over Chinese society and more assertive foreign policy.

Chinese officials have railed against what they claim is deep-seated foreign interference in the territory that they blame for encouraging last year’s anti-government protests. Beijing condemned those protests as an attempt to permanently split Hong Kong away from China.

Drafting of the law took place amid intense secrecy, with even top Hong Kong officials reportedly not given advance notice of its specifics.

It is believed that Beijing will now also have ultimate power over appointments to top government departments, further reducing the relative independence it promised to Hong Kong in a 1984 joint declaration with Britain that is considered an international treaty.

Questions also linger over the effects on Hong Kong’s free press that has come under increasing political and financial pressure, as well as the operations of non-governmental organizations, particularly those with foreign connections.

The law’s passage comes after Hong Kong’s legislature in early June approved a contentious bill making it illegal to insult the Chinese national anthem. Pro-China figures have also been pushing for more “patriotic” education to be introduced into the curriculum in hopes that will boost their identification with Beijing.