Back on April 1, Governor Andrew Cuomo ordered all playgrounds statewide to be shut down due to the COVID-19 pandemic. But on June 11, as the state began to reopen, the Governor authorized local governments to open playgrounds at their discretion. Still, Mayor de Blasio was determined to keep the city’s playgrounds closed, causing Senator Simcha Felder, Assemblyman Eichenstein, and Councilman Yeger to demand that the Mayor take action. At a rally at Kolbert Park on June 14, the legislators explained that the city’s children were playing on the streets in unsafe conditions. It was vital that any possible playground space be made available to the public.

Eventually, Senator Felder, Assemblyman Eichenstein, and Councilman Yeger re-opened the playgrounds themselves to provide the children with the playground access they so desperately need and deserve. 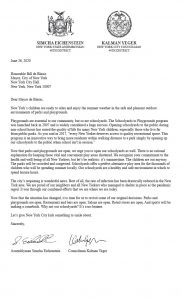 And while the Mayor did officially agree to open playgrounds to the public on June 22, schoolyards behind public school buildings remain shuttered. This is unreasonable. Under the “Schoolyards to Playgrounds” program, schoolyards across the city are generally available to the public during non-school hours. These schoolyards provide a critical role in that they add considerable open space and play areas for the city’s children. If playgrounds are open, then it only makes sense for schoolyards to be open as well.

Accordingly, Assemblyman Eichenstein and Councilman Yeger have reached out to the Mayor demanding that the schoolyards, as well as the playgrounds, be reopened for all the city’s children. This will greatly enhance their options for outdoor fun as they look forward to a warm, relaxing, and enjoyable summer.