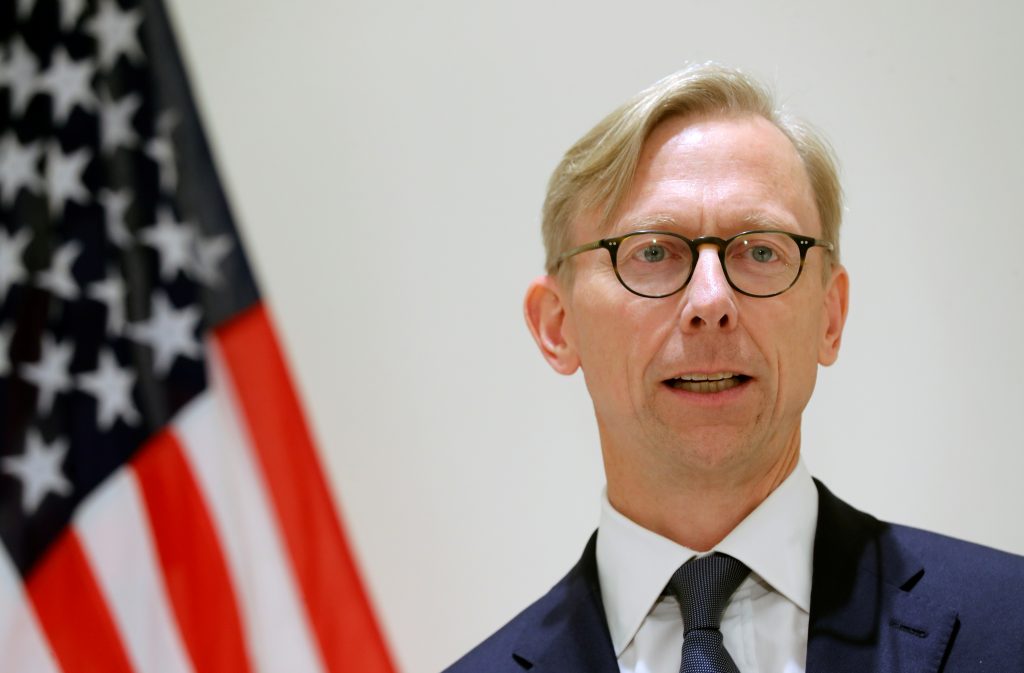 An expiring United Nations weapons embargo on Iran must remain in place to prevent it from “becoming the arms dealer of choice for rogue regimes and terrorist organizations around the world,” the U.S. special representative to Iran said Sunday.

Brian Hook told The Associated Press that the world should ignore Iran’s threats to retaliate if the arms embargo set to expire in October is extended, calling it a “mafia tactic.” Among its options, the Islamic Republic could expel international inspectors monitoring Iran’s nuclear program, deepening a crisis created by President Donald Trump unilaterally withdrawing from Tehran’s 2015 atomic accord with global powers.

The U.N. arms embargo so far has stopped Iran from purchasing fighter jets, tanks, warships and other weaponry, but has failed to halt its smuggling of weapons into war zones. Despite that, Hook argued both an import and export ban on Tehran must remain in place to secure the wider Mideast.

“If we let it expire, you can be certain that what Iran has been doing in the dark, it will do in broad daylight and then some,” Hook said.

Iran’s mission to the United Nations did not immediately respond to a request for comment on Hook’s remarks.

Hook made the comments while on a visit to Abu Dhabi, the capital of the U.S.-allied United Arab Emirates, as part of a Mideast tour. Hook met Saturday with Emirati Foreign Minister Abdullah bin Zayed Al Nahyan and planned Sunday to meet with other officials. Hook declined to say where else he would travel on his trip.

Hook spoke to AP journalists in Dubai via videoconference as Abu Dhabi’s borders remain closed to the UAE’s six other sheikhdoms over the coronavirus pandemic.

The United Nations banned Iran from buying major foreign weapon systems in 2010 amid tensions over its nuclear program. That blocked Iran from replacing its aging equipment, much of which had been purchased by the shah before the 1979 Islamic Revolution. An earlier embargo targeted Iranian arms exports.

Iran long has been outmatched by U.S.-backed Gulf nations like the UAE, which have purchased billions of dollars of advanced American weaponry. In response, Tehran turned toward developing ballistic missiles as a deterrent. Hook declined to discuss an explosion Friday in Iran near an area analysts believe hides an underground tunnel system and missile production sites.

Being able to pay for new, foreign weapons systems, however, remains in question. U.S. sanctions imposed after Trump withdrew from the nuclear deal have crushed Iran’s oil sales, a major source of revenue. Energy prices have also collapsed amid the coronavirus pandemic.

Asked about how Iran would pay for the new weapons, Hook said Tehran’s lowered revenues represented “a good thing for the region” and affected its ability to back its regional proxies, like Syria.

“We have put this regime through our strategy on the horns of a dilemma,” Hook said. “They have to choose between guns in Damascus or butter in Tehran.”

That financial pressure has led to sporadic antigovernment protests in Iran, including nationwide demonstrations in November that Amnesty International says saw over 300 people killed. While the Trump administration has maintained it doesn’t seek to overthrow Iran’s government, its pressure campaign has exacerbated public anger against its Shiite theocracy.

Since Trump’s withdrawal from the nuclear deal, Iran has broken all the accord’s production limits. The U.N.’s International Atomic Energy Agency, which monitors Iranian nuclear activity as part of the deal, says Tehran’s stockpile of low-enriched uranium continues to grow.

While not at weapons-grade levels, the growing stockpile and increased production shortens the one-year timeline analysts believe Iran would need to have enough material for a nuclear weapon if it chose to pursue one. Iran long has denied seeking atomic bombs, though the IAEA previously said Iran had done work in “support of a possible military dimension to its nuclear program” that largely halted in late 2003.

Iran has threatened to expel IAEA inspectors and withdraw from the Nuclear Nonproliferation Treaty amid the U.S. pressure campaign. North Korea, which now has nuclear weapons, is the only country to ever withdraw from the treaty.

“If we play by Iran’s rules, Iran wins,” Hook said. “It is a mafia tactic where people are intimidated into accepting a certain kind of behavior for fear of something far worse.”

Hook maintained that the U.N.’s ban on Iran exporting weapons abroad also needed to remain in place, even though it has not prevented Tehran from smuggling arms. Iranian arms in particular have turned up in Yemen, where Tehran-backed Houthi rebels fight a Saudi-led coalition.

“I don’t think anyone believes that Iran’s behavior merits loosening restrictions on their ability to move weapons,” Hook said.