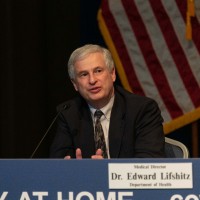 Nearly 1,900 people likely died of COVID-19 in New Jersey but were not initially counted in the state’s death, though they now will be, Democratic Gov. Phil Murphy said Thursday.

Murphy said state health officials recently completed a review of thousands of death certificates of people who died with coronavirus symptoms despite not having been tested. Those people likely died from COVID-19, Murphy said.

The total amounted to 1,854 people, or about 14% of the overall death toll. That means the combined death toll of those confirmed with the virus and suspected cases stands at 14,872, the governor said.

“We report this out of nothing less than a solemn sense of duty,” Murphy said.

The newly reported deaths fall in three categories, according to Dr. Ed Lifshitz, the director of the Health Department’s communicable disease service. They include a large group of people who were part of a known outbreak, primarily at nursing homes and other similar facilities. Another smaller group was people who had what Lifshitz called a “less specific” COVID-19 test administered. The third group was located by combing through death certificates and searching for coronavirus cases that might have been missed.

Murphy reported the overnight increase in positive cases grew by 406 to about 170,000 overall. There were 26 new deaths reported overnight, Murphy said.

On Friday, the state will unveil its guidance for school reopening in the fall, the governor said.

The state’s roughly 600 school districts, plus private schools, conducted remote lessons because of the outbreak. It’s unclear how the school year will resume, whether in person, remotely, or some combination of both.

But Murphy added that districts will have flexibility to craft reopening plans.

Jobless claims in New Jersey ticked up 25% last week, climbing for the second straight week since they had begun to decline amid the COVID-19 shutdown, the Labor Department said Thursday.

There were 33,000 claims made last week, up from about 26,000 the week before, the state Labor Department said. Since the outbreak hit New Jersey in early March there have been nearly 1.3 million claims overall.

A new call center to help handle claims opened up last week, the department added, with the aim of reducing wait times and easing reports of frustration among those seeking benefits.