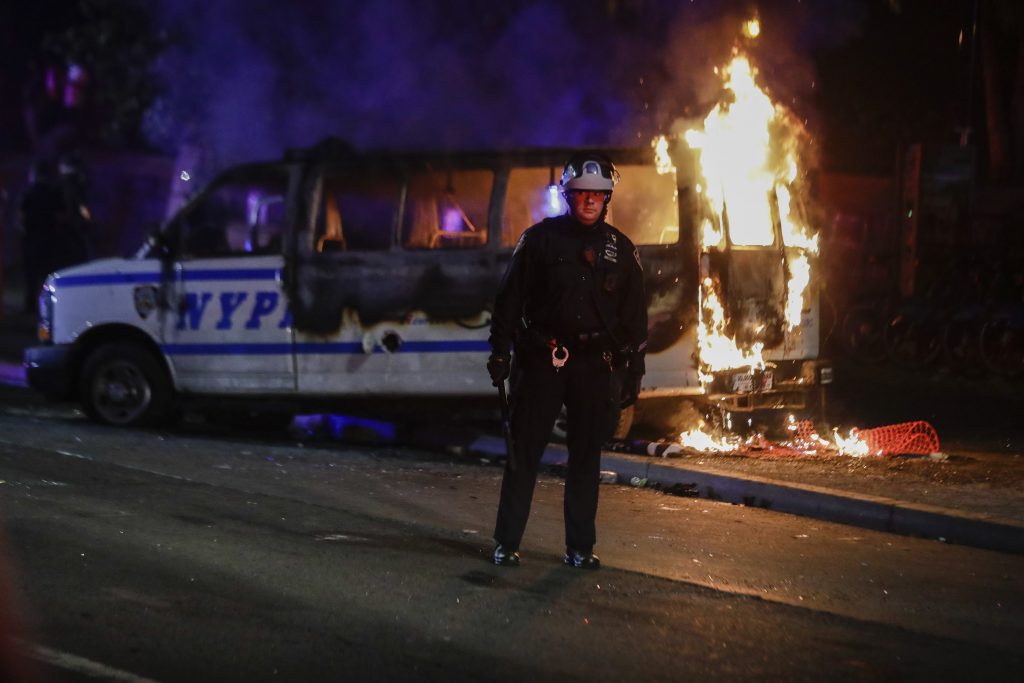 A 19-year-old from Queens, N.Y., has been charged in federal court with torching an New York Police Department van near Times Square following a streak of widespread violence and looting that grew out of George Floyd protests.

Victor Sanchez-Santa allegedly set a cloth glove on fire and tossed it under the vehicle on West 42nd Street, near a police facility, around 1:20 a.m. June 9.

He pulled up to the scene in a Honda Civic with gold rims and parked next to the police vehicle, according to officials who reviewed video from the scene. They say he stepped out of his car, threw the glove on the pavement beneath the police vehicle and then drove off, heading west.

Police investigators say they were quickly able to track down Sanchez-Santa because the car was registered to him and the incident was captured on video recordings.

The next day, an NYPD detective showed up at his door and was able to identify him through the mug shot attached to his rap sheet. The investigator also saw the Honda in the driveway of Sanchez-Santana’s home and the suspect admitted he was driving in Manhattan around the time of the crime, according to court documents.

Sanchez-Santana appeared – via digital hookup from a holding cell – before a magistrate judge in the Southern District of New York in Manhattan on Thursday to face an arson complaint. He was released and ordered to remain under his mother’s watch. He must post a $250,000 bond by June 25.

U.S. Magistrate Judge James Cott said Sanchez-Santana must “maintain residence with his mother and seek to maintain employment and or an education program” and cannot be in possession of a weapon or destructive device.

Since daily protests began around the city, dozens of police vehicles have been set on fire. On one night in Lower Manhattan, the streets were littered with burned out police vehicles as the police struggled to keep up with the unrest. The area near Union Square and further south where many of the fires were set smelled like smoke and burning metal.

In federal court in Brooklyn, two activists who are also attorneys are facing charges for allegedly throwing a molotov cocktail at an NYPD vehicle in Brooklyn. Officials say the pair tried to distribute other incendiary devices to other protesters, encouraging more violence.

Another woman is charged with throwing a Molotov device into an occupied police van, also in Brooklyn. The officers managed to make it out safely.