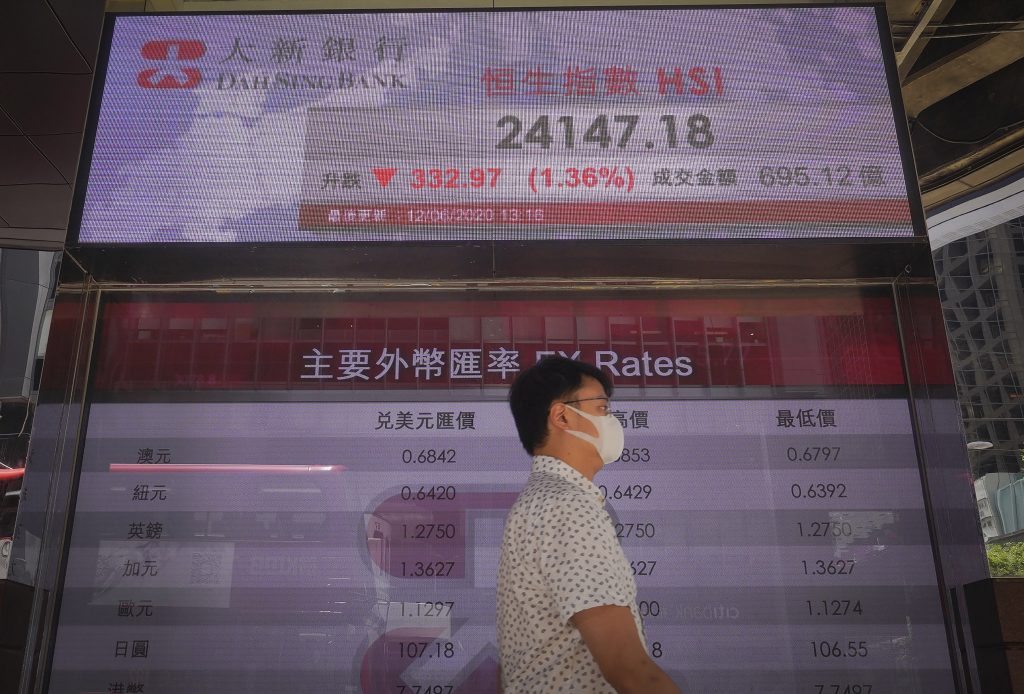 Stocks rose sharply in early trading on Wall Street Friday, as the market recouped some of its losses a day after its biggest rout since mid-March.

The S&P 500 was up 2.2% a day after dropping 5.9%. The benchmark index is still headed for a weekly loss following three weeks of solid gains. Small-company stocks and bond yields moved broadly higher, signs that pessimism about the prospects for an economic recovery from the coronavirus pandemic was easing.

Technology companies accounted for a big slice of the gains. Financials, health care and industrial companies also helped lift the market. Most of the stocks in the S&P 500 rose. Companies that were among the biggest losers Thursday were big gainers in the early going, including airlines and cruise lines.

The rebound for stocks is a reversal for the market, which sold off for three days in a row as a rise in COVID-19 cases in the U.S. and a discouraging economic outlook from the Federal Reserve dashed investor optimism for a quick economic recover as states lift stay-at-home orders and businesses reopen.

Optimism that the reopening of the economy would be relatively quick once the restrictions put in place to stem the spread of the outbreak eased helped power the stock market’s red-hot comeback since late March. However, it’s unclear if Thursday’s market sell-off reflected a fundamental reassessment of the economic outlook or a one-off drop as traders cashed in on the market’s recent gains.

“We will continue to see volatility across the markets, as there is plenty of uncertainty on what the reopening of the U.S. economy looks like,” said Julie Fox, northeast private wealth market head at UBS Financial Services.

The Dow Jones Industrial Average was up 653 points, or 2.6%, to 25,797. The Nasdaq, which climbed above 10,000 points for the first time on Wednesday, was up 2.2%. The Russell 2000 index of small companies was up the most, climbing 3.5% in the early going. European markets also rose, but Asian markets ended broadly lower.

Bond yields headed broadly higher, a sign that pessimism about the economy was ebbing. The yield on the 10-year Treasury yield rose to 0.71% from 0.70% late Thursday.

Many market watchers have been saying that the comeback in the market since late March was overdone and did not reflect the dire state of an economy in its worst crisis in decades. The S&P 500 rallied 44.5% between late March and Monday, erasing most of its losses tied to the pandemic.

Investors have been balancing optimism about the reopening of the economy against the possibility that the relaxing of restrictions will lead to a surge in new coronavirus infections and fatalities. Cases are climbing in nearly half the states, according to an Associated Press analysis, a worrying trend that could intensify as people return to work and venture out during the summer.

France’s CAC 40 in Paris rose 1.5%, while Germany’s DAX added 0.9%. Britain’s FTSE 100 was up 1.4%, recovering from early losses on news that the British economy contracted by 20.4% in April, wiping out nearly two decades worth of growth.