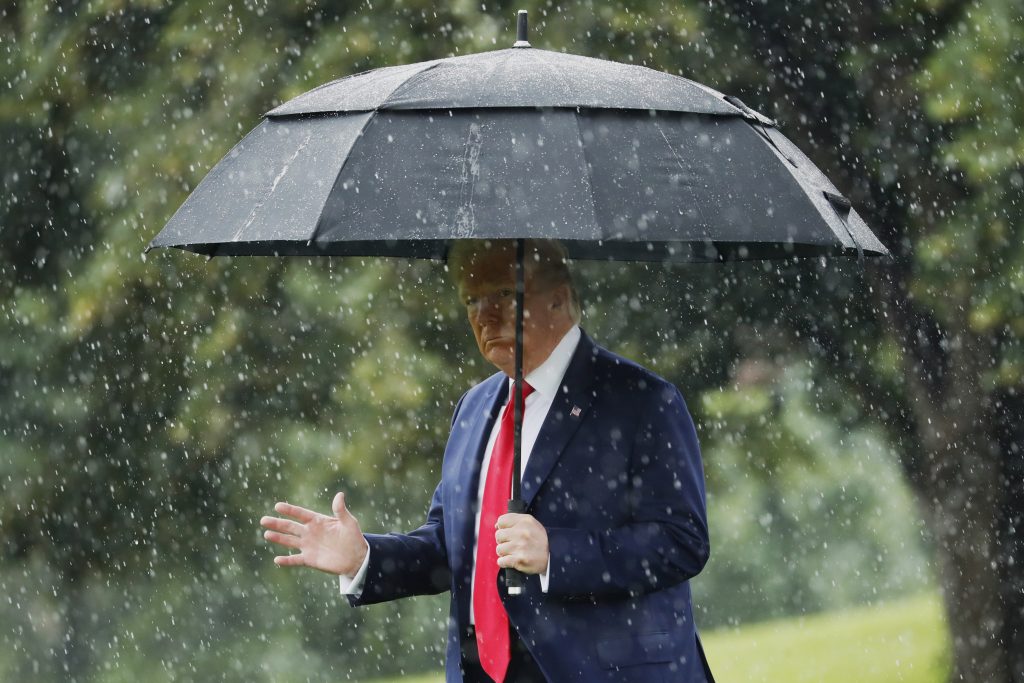 When the tourists stopped coming in March, so did Lorin Lynch’s paychecks from a Tampa Bay hotel. She burned through her savings while awaiting financial relief from Florida’s unemployment office. It took nearly three months before the 26-year-old single mother finally got a check.

Even as Florida re-opens for business, Lynch is still fuming over an unemployment system that was among the country’s slowest to respond to the economic calamity triggered by the coronavirus pandemic. The state’s own statistics show that about 40% of the 2.2 million claims it received remain unpaid.

Even with unemployment checks now arriving, Lynch said, “I’m honestly terrified about how I’m going to feed my son each day and what’s going to happen next.”

That frustration is a problem for Florida Republicans as they try to secure their state again for President Donald Trump. President Trump’s path to winning reelection is exceedingly narrow without Florida’s 29 electoral votes. The broken unemployment insurance system raises the prospect that thousands of out-of-work Floridians will bring their anger to the voting booth in a state where races are decided by the slimmest of margins.

“I’ve been a Trump supporter, but I’m kind of questioning everything,” said Lynch, who voted for him in 2016 when she lived in Minneapolis. She was initially impressed by his business acumen, she said, but is now questioning his leadership in crisis.

Much of her anger is directed at Republican Gov. Ron DeSantis, a Trump ally. Gov. DeSantis has acknowledged that the unemployment system known as CONNECT was like a “jalopy in the Daytona 500” being “left in the dust.”

To stem criticism and the political fallout, DeSantis beefed up staffing and ordered additional servers to help rescue the beleaguered system. He claims the system is now functioning and blames user error and fraudulent claims for some of the unpaid benefits.

In Washington, the Senate’s top Democrat, Chuck Schumer, has asked the Labor Department for an internal investigation. Joe Biden, the presumptive Democratic presidential nominee, recently assailed the system in an interview.

“We have to make the unemployment system function, and your state isn’t very functional,” he told WFTV in Orlando, taking a shot at DeSantis. “And that relates to management of the system.”

Florida’s unemployment woes add to the troubles for Trump five months from Election Day. Polling shows social unrest, the pandemic and the economic fallout have eroded his support among older people and in key battleground states.

Democrats in Florida have been handed a cudgel, said Aubrey Jewett, a University of Central Florida associate professor who cowrote Politics in Florida.

“There is a large pool of voters who might have their votes swayed because of this issue. The question is how many,” Jewell said.

Protesters tried to draw attention to the system’s woes Wednesday by holding rallies in Tallahassee, Orlando, Fort Lauderdale, Tampa and other communities.

Some of the hardest-hit counties lie along the state’s crucial Interstate 4 corridor, stretching from Orlando to Tampa Bay. In Orange County, home to Disney World, nearly a fourth of the workforce lost jobs. In nearby Osceola County, about a third of workers are unemployed.

Hundreds of thousands of Floridians in the Democratic strongholds of Miami-Dade, Palm Beach and Broward counties were also left reeling by job losses, and Democrats have begun highlighting the unemployment fiasco to boost party turnout.

Florida, like other states, has begun lifting the restrictions that caused its economy to sputter and unemployment to surge. In April, Florida’s unemployment rate hit 12.9%, up from 2.8% in February. Figures for May haven’t yet been released.

On Thursday, the U.S. Department of Labor reported new jobless claims in Florida continued to fall as restaurants and retailers began calling people back to work. Some 110,000 Floridians filed for new jobless claims last week, according to the federal government, down from more than 207,000 claims the week before.

“It’s one of those things where once the issue is solved, it’s going to disappear,” said Florida Republican Party chairperson Joe Gruters. “I don’t think anybody ever expected the wave of unemployment applications at the same time the way it did during this crisis.”

Gruters’ mother was among those who couldn’t get an unemployment check.

“Someone should go to jail over that,” Gruters tweeted in April.

Trump has blamed Democrats for any “lateness” in payments, saying he “told them this would happen, especially with many states which have old computers,” he tweeted in April. He did not elaborate.

Republicans have since turned to promising a rapid rebound. “They’ve already built the best economy in Florida’s history once, and they will do it again after they are reelected this November,” the Republican National Committee said.

But Democrats aren’t likely to let it go. They’ve sought to cast the issue as the result of a long-standing Republican effort to weaken the social safety net in Florida.

They point to changes made under the previous governor, Republican Rick Scott, who won election to the U.S. Senate in 2018. Under his watch, Florida cut the number of weeks people could collect benefits and put it on a sliding scale — from 12 to 23 weeks — depending on the state’s unemployment rate.

Claimants in Florida currently get aid for up to 12 weeks — tied with North Carolina for the shortest period of any state.

Other changes made it more difficult for some to apply, including by eliminating paper applications and stiffening the required proof that recipients were actively looking for work. Critics say the changes were aimed at reducing payments, as well as artificially deflating unemployment numbers.

Carolina Nunez is registered as a Republican but in recent years has supported Democrats. When she lost her paychecks in March and struggled to claim benefits, she blamed Republicans.

So did her husband, Chris Kee, a sheriff’s deputy in central Florida, who voted for DeSantis in 2018 and for Trump in 2016.

Despite uncertainty spawned by the coronavirus and anti-police brutality protests, Kee and Nunez are sure of one thing: They won’t be voting for Trump in November.

“We hear one thing coming from our governor and people who share his views, saying everything is fixed,” he said. “But everyone else who is going through the system, or is trying to receive benefits, is saying otherwise.”