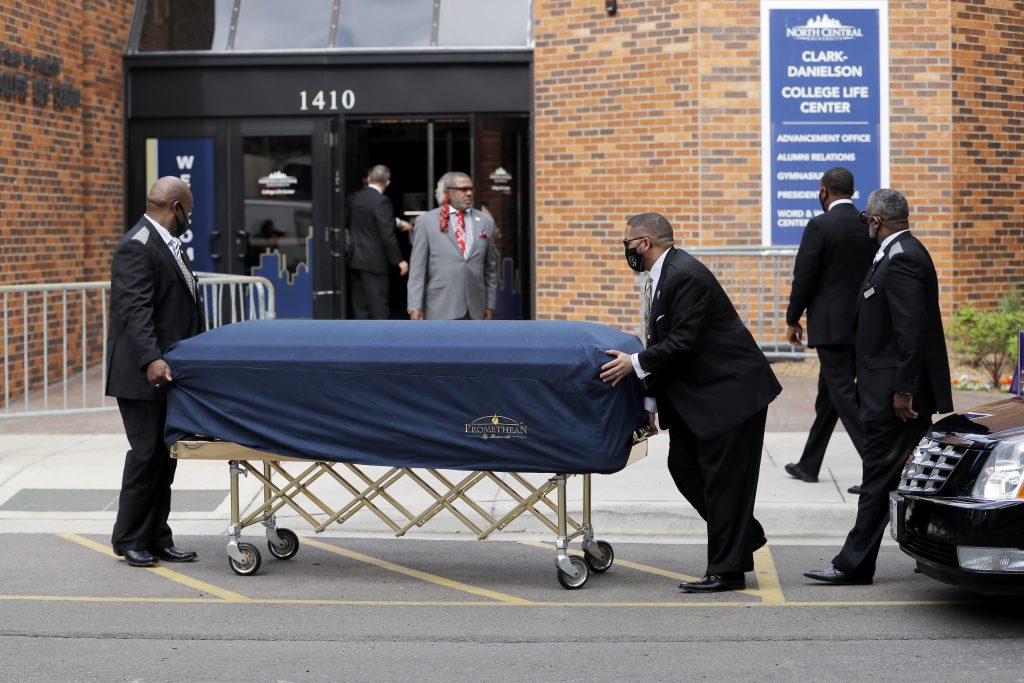 Organizers of a Minneapolis memorial for George Floyd placed floral arrangements around a golden casket Thursday, as families, friends and celebrities prepared to pay their respects to the man whose death sparked protests nationwide and calls for an end to racial injustice.

A black hearse was parked outside the Frank J. Lindquist sanctuary at North Central University hours before the memorial was to begin in Minneapolis — the first service to be held in the next six days across three communities where Floyd was born, grew up and died.

Floyd, who was black, died May 25 in Minneapolis after a white police officer pressed his knee into Floyd’s neck while Floyd was handcuffed for several minutes, even after Floyd stopped moving and pleading for air. Since then, Floyd’s name has been chanted by hundreds of thousands of people and empowered a movement. Violent encounters between police, protesters, and observers have inflamed a country already reeling from the coronavirus pandemic.

Inside the sanctuary in Minneapolis, a self-portrait of Floyd stood to the left of the casket, and a blue and orange mural that had been painted at the site of a makeshift memorial at the site of his death was projected above the pulpit. A drum set, keyboard and four microphones stood ready for a small choir to perform.

The Rev. Al Sharpton was among those who planned to speak, as organizers of the memorials planned to acknowledge the meaning Floyd had in life to his large family and the broader meaning he has assumed in death.

“It would be inadequate if you did not regard the life and love and celebration the family wants,” Sharpton said. “But it would also be inadequate … if you acted as though we’re at a funeral that happened under natural circumstances.”

“The family is not independent of the community,” he said. “The family wants to see something happen.”

After the first service, Floyd’s body will go to Raeford, North Carolina, the state where he was born 46 years ago, for a two-hour public viewing and private service for the family on Saturday.

Finally, a public viewing will be held Monday in Houston, where he was raised and lived most of his life. A 500-person service on Tuesday will take place at a church and will include addresses from Sharpton, family attorney Ben Crump, and the Rev. Remus E. Wright, the family pastor. Former Vice President Joe Biden, the presumptive Democratic presidential nominee, may attend, and other political figures and celebrities are expected as well. A private burial will follow.

Due to the coronavirus, the church will be limited to 20% of its capacity and visitors will be required to wear masks.

Floyd’s final journey was designed with intention, Sharpton said. Having left Houston for Minneapolis in 2014 in search of a job and a new life, Floyd will retrace that path.

“They collectively said we need to make the first memorial statement from the city he chose to go to make a living, that ended his life,” he said.

Clayborne Carson, director of the Martin Luther King, Jr. Research and Education Institute at Stanford University, said that “for a person who was pretty much unknown to the world until just last week, this is unprecedented.”

The size of Floyd’s memorial reflects his impact and the need to recognize the widespread grief his death has caused, said Tashel Bordere, an expert on grief and assistant professor at the University of Missouri. It also reflects a tradition particularly in African American communities that large funerals can provide the recognition that a lost loved one struggled to receive in life.

Carson said the impact of Floyd’s death would ultimately be measured by changes in how police treat African Americans and the disparate rates at which black men are incarcerated.

“Otherwise, it’ll just be the next George Floyd and the one after that,” he said.