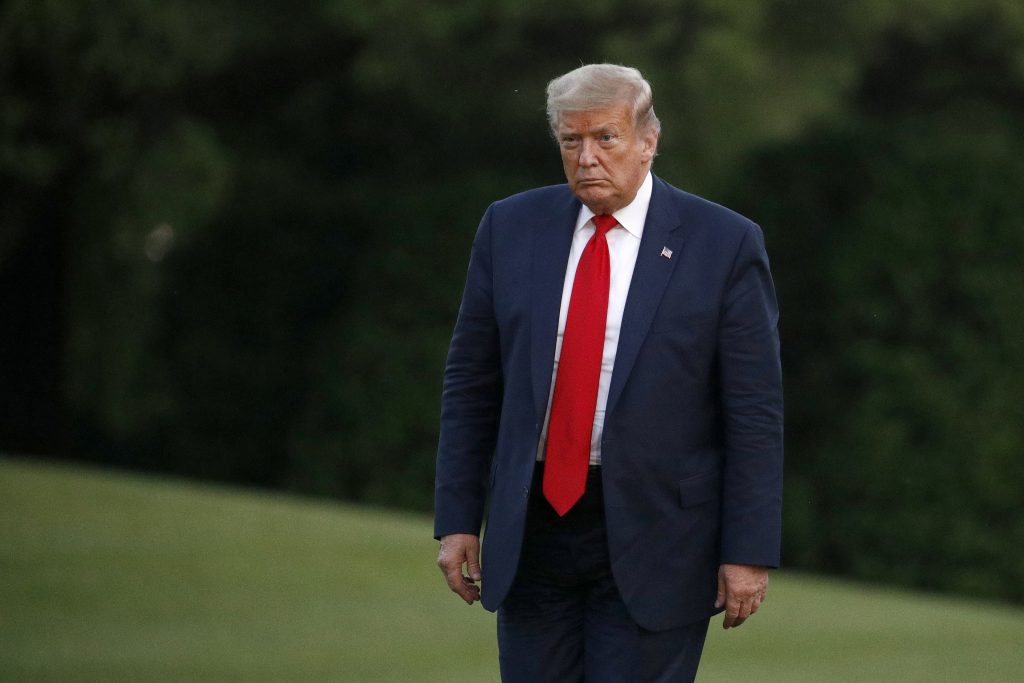 President Trump on Sunday blamed far-left anarchists for a flare-up of street violence amid nationwide protests against police brutality, even as critics denounced him for stoking divisiveness at a moment when COVID-19 and economic ruin are already causing upheaval across the country.

After another night of fiery unrest in dozens of U.S. cities, the president tweeted that his administration would designate a loose movement of self-described fighters against fascism, known as “antifa,” as a “terrorist organization.” The label, typically used for foreign terrorists such as Islamic State, makes it illegal for U.S. citizens to support the organization.

Trump’s authority to make such a designation in a domestic context is unclear, and the groups he is targeting lack a formal structure and centralized leadership, raising doubts about enforcement.

“The United States of America has no legal authority to designate any domestic entities as ‘terrorist organizations,’” said Steve Vladeck, a national security law expert at University of Texas.

Mayors of several afflicted cities said they were still struggling to understand the complex dynamics behind an outbreak of looting, vandalism and property destruction that has accompanied protests that first erupted in Minneapolis after the death last week of George Floyd. The 46-year-old black man died after a police officer knelt on his neck for nearly nine minutes. The officer, Derek Chauvin, has been fired and faces third-degree murder charges.

Just as with the coronavirus outbreak, competing political narratives have emerged over the root cause of the civil unrest. On Sunday, Trump’s national security adviser, Robert O’Brien, blamed “bad apples” in law enforcement rather than systemic racism for repeated episodes of lethal force against black men and boys.

“You know the history from which it springs,” he said of Floyd’s death. “You know the depth of the pain and anguish, where black people in communities all across this country live in fear of the police.”

Booker, interviewed on CNN, said the protests were “not just a reaction to a live or caught-on-tape murder, but to deep wounds within our society, within our body politic.”

Benjamin Crump, an attorney for the Floyd family, told CBS’ “Face the Nation” that “the only thing that can put out these fires are police accountability and equal justice.”

As unrest has spread, the Trump administration has insisted that outsiders using protests as cover for acts of violence were left-wing anarchists, not right-wing extremists, such as white nationalist groups that have been cited as a threat by the Department of Homeland Security.

Atty. Gen. William Barr, at a news conference on Saturday, blamed “anarchic and left extremist groups” who traveled across state lines to take part in protests, without specifying how that conclusion was reached.

Mayors and other state and local officials have generally painted a more nuanced picture, saying it is not entirely clear who violent outside actors are.

“We’re working to get to the bottom of that right now,” said Melvin Carter, the mayor of St. Paul, Minn., interviewed on CBS’ “Face the Nation.” Atlanta’s Mayor Keisha Lance Bottoms, appearing on NBC’s “Meet the Press,” said community organizers had “shared that these were people from the outside” committing acts of violence, but “they did not know them, and had no idea where they came from.”

O’Brien, on said he was not aware of reports that white nationalists and other far-right groups may have infiltrated the protests. “This is being driven by antifa,” he said. In a separate appearance on ABC he echoed that, saying “everything I’m seeing is that this is antifa.”

But mixed messages are not uncommon in the Trump administration, and Secretary of State Michael R. Pompeo, interviewed on Fox News was less definitive.

“I think it still remains to be seen exactly how what began as peaceful protests by people who were clearly saddened and frustrated by the police action against George Floyd…. proceeded to get this way,” Pompeo said. “But we have seen this pattern before, where outsiders have come in.”

Former Vice President Joe Biden, the presumptive Democratic presidential nominee, called for an end to street violence, even as he voiced support for those seeking to express pain and anger over Floyd’s death. In a previous comment on Friday, he did not address looting or violent acts.

“Protesting such brutality is right and necessary,” Biden said in an statement distributed by his campaign. “It’s an utterly American response. But burning down communities and needless destruction is not.”

A tweet by Trump on Friday saying that “when the looting starts, the shooting starts” — a quote dating back to police crackdowns on civil rights marchers in the 1960s — was flagged by Twitter as violating the social media site’s rules prohibiting the glorifying of violence.

The president also tweeted Saturday that if protesters outside the White House had breached its fence, they would have been met by “vicious dogs” and “ominous weapons.”

Washington, D.C., Mayor Muriel Bowser, appearing on “Meet the Press,” said Trump should refrain from “divisive tweets that are meant to hearken to the segregationist past of our country.”

“He should just stop talking,” Lance Bottoms, the Atlanta mayor, said on CNN. “He speaks, and he makes it worse.”

Even a Republican senator offered mild criticism. “Those are not constructive tweets, without any question,” Sen. Tim Scott of South Carolina told Fox News.

Scott said he spoke with Trump on Saturday and expressed the belief that the president would strike a more constructive tone going forward. Trump did invoke unifying language following the successful space launch of two U.S. astronauts in Florida on Saturday when he declared himself “a friend and ally to every American seeking justice and peace.”

But by late Saturday, he appeared to again be making veiled threats of use of force when he wrote on Twitter that the National Guard had been “released” in Minneapolis, adding: “No games!”

Trump also unleashed a fresh attack Sunday on the news media, following reports from journalists who said they were deliberately targeted by police during protests. “They are FAKE NEWS and truly bad people with a sick agenda,” he tweeted.