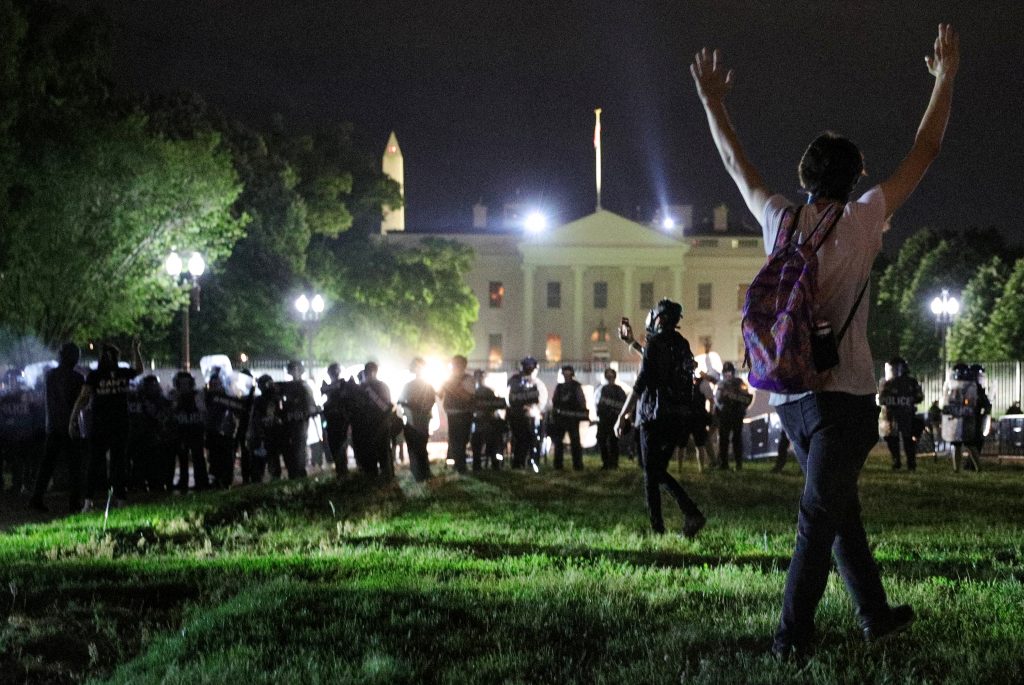 Shouting “Black Lives Matter” and “I can’t breathe,” hundreds of people converged on the White House for a second straight day Saturday to protest the death of George Floyd in Minneapolis and President Donald Trump’s response. In several instances, pepper spray was used to disperse the crowd as pockets of violence erupted.

Trump did not talk to reporters as he returned to the White House after watching the launch of a SpaceX rocket in Florida. It was not clear if he could hear the protest over the sounds of his helicopter.

“I stand before you as a friend and ally to every American seeking justice and peace, and I stand before you in firm opposition to anyone exploiting this tragedy to loot, rob, attack and menace,” the president said after watching the launch of a SpaceX rocket. “Healing, not hatred, justice, not chaos, are the missions at hand.”

Protesters in Washington chanted and taunted the police. Witnesses said there were multiple incidents of protesters pushing against barricades and being repelled with pepper spray.

“We’re sick of it. The cops are out of control,” protester Olga Hall said. “They’re wild. There’s just been too many dead boys,” she said.

The Washington protest was one of several around the country following Floyd’s death. During one confrontation, protesters took down a barrier and one person threw an electric scooter at the police.

An activist wearing a Black Lives Matter T-shirt put himself between police and the protesters and yelled, “Stop. This is what they want.”

Speaking over a megaphone earlier in the evening, Cameron McCall said, “We don’t need violence. All we need are our voices.”

While some protesters stayed near the White House, others marched through the streets chanting, “No justice and no peace.” and “Say his name: George Floyd.” The mood was angry and several speakers implored marchers to remain peaceful.

The march paused between the Washington Monument and the African-American Museum and demonstrators sat down in the street for a moment of silence for each minute that the Minneapolis police officer knelt on Floyd’s neck.

Floyd, who is black, was being held in handcuffs when he died Monday in Minneapolis after a police officer pressed his knee into his neck for more than eight minutes even after Floyd stopped moving and pleading for air. Protests have erupted in U.S. cities in the days since.

At the Lincoln Memorial, one organizer spoke over a megaphone “Look to the left and to the right and thank that person. We can’t hug anybody because of COVID but I love you anyway.” Many of the protesters wore masks, but did not socially distance themselves.

Another group circled through the Capitol Hill neighborhood for at least an hour in cars, honking. A helicopter hovered overhead.

During an earlier skirmish, protesters threw bottles and eggs at Secret Service officers on the edge of Lafayette Square and pepper spray was used to disperse them, according to a reporter for radio station WTOP.

“After a long stalemate the Secret Service, in full tactical gear, pushed forward and cleared the intersection, and there was a cloud of pepper spray and people ran backwards as fast as they could. It was almost a mad stampede,” said WTOP digital editor Alejandro Alvarez.

In a series of tweets earlier Saturday, Trump doubted their allegiance to Floyd’s memory, saying they were “professionally managed.” He offered no evidence to back his assertion, and the president even seemed to invite supporters to make their presence felt: “Tonight, I understand, is MAGA NIGHT AT THE WHITE HOUSE???”

Trump later rejected the suggestion that he was stoking a potential conflict between protesters and his supporters. “I was just asking. But I have no idea if they are going to be here,” he said. “MAGA is Make America Great Again. By the way, they love African American people. They love black people.”

At Saturday’s demonstration, there was no evidence of a counter-move by Trump supporters.

Trump said he had “watched every move” from inside the executive mansion during Friday’s protest and “couldn’t have felt more safe” as the Secret Service let the protesters carry on, “but whenever someone … got too frisky or out of line, they would quickly come down on then, hard — didn’t know what hit them.”

The president also criticized the mayors of Washington and Minneapolis.

Trump said Minneapolis Mayor Jacob Frey “is probably a very good person, but he’s a radical, left mayor.” He then described how he watched as a police station in the city was overrun. “For that police station to be abandoned and taken over, I’ve never seen anything so horrible and stupid in my life,” Trump said when speaking briefly to reporters at the White House.

He said Minnesota officials have to get tougher with rioters, and that by doing so they would be honoring the memory of Floyd.

The Secret Service said in a statement Saturday that six protesters were arrested in Washington and “multiple” officers were injured. There were no details on the charges or nature of the injuries. A spokesman for U.S. Park Police said their officers made no arrests, but several suffered minor injuries and one was taken to a hospital after being struck in the helmet by a projectile.

Wolf said the Secret Service was “evolving and adapting to the changing nature of the threats they face.”

As he tweeted, Trump claimed that many Secret Service agents were “just waiting for action” and ready to unleash “the most vicious dogs, and the most ominous weapons, I have ever seen.” His reference to “vicious dogs” potentially being sicced on protesters revisits images from the civil rights movement when marchers faced snarling police dogs and high-pressure fire hoses.

In a news conference Saturday afternoon, Muriel Bowser, mayor of the nation’s capital, called Trump’s remark’s “gross” and said the reference to attack dogs conjures up with the worst memories of the nation’s fight against segregation.

“I call upon our city and our nation to exercise restraint, great restraint, even as the president tries to divide us,” she said. “I feel like these comments are an attack on humanity, an attack on black America, and they make my city less safe.”

In contrast with the president’s tweets, the Secret Service said it “respects the right to assemble and we ask that individuals do so peacefully for the safety of all.”

In protests that stretched into the early hours Saturday, people hurled pieces of bricks, bottles and other objects at Secret Service and Park Police officers who were in riot gear behind barricades around the White House. Protesters at times kicked and punched officers and wrestled over the barricades.

As some in the crowd grew more aggressive, police deployed pepper spray to keep them back and maintain a perimeter of officers around the White House.

The protest went on for hours before police declared the gathering “unlawful” and ordered everyone to leave Lafayette Square, a seven-acre public park located directly north of the White House. Dozens of officers pushed forward with their shields and fired off streams of pepper spray at protesters.

“Out of the park or you will be sprayed,” an officer shouted at the crowd.