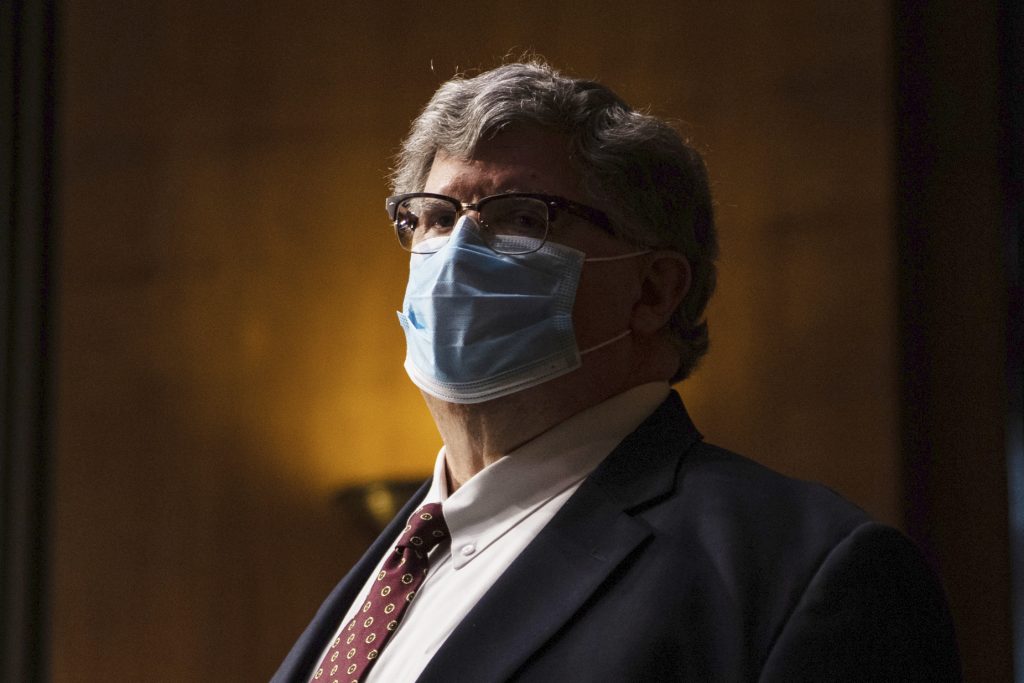 President Donald Trump’s choice to oversee a significant chunk of the $2 trillion economic rescue law is pledging to conduct audits and investigations “with fairness and impartiality.”

Brian Miller, a lawyer in the White House counsel’s office, told the Senate Banking Committee during his confirmation hearing on Tuesday that “independence is vital” for the special inspector general for pandemic recovery. The post would place him in charge of overseeing a roughly $500 billion Treasury fund for industry created as part of the economic rescue law approved in late March.

In written testimony, Miller pledged to be vigilant in protecting the integrity and independence of his office and vowed “to seek the truth in all matters that come before me and to use my authority and resources to uncover fraud, waste and abuse.”

Miller has worked at the Justice Department and was inspector general for nearly a decade at the General Services Administration, which oversees thousands of federal contracts. While he is respected in the oversight community, Miller’s role in the White House counsel’s office — which led Trump’s defense during impeachment — is troubling, Democrats and watchdog groups said.

Ohio Sen. Sherrod Brown, top Democrat on the banking panel, questioned whether Miller will be able to hold the Trump administration accountable for how it administers the business program and “guarantee that corporations getting taxpayer money put their workers first.”

In the last 20 years, Brown said his staff found only one inspector general candidate who was nominated while serving in the White House counsel’s office and another who served in the legal office of an earlier administration. Both nominees resigned, “one for politicizing the office and the other for a lack of independence,” Brown said. “Not a great track record.”

Brown appeared on a video link, as he and other Democrats chose to stay away from the hearing because of concerns about the coronavirus. At one point, dogs could be heard barking while Brown spoke from his Ohio home.

Idaho Sen. Mike Crapo, the panel’s Republican chairman, wore a mask as he led the hearing, which was sparsely attended because of virus concerns. At least five GOP senators were present, including two who did not wear masks while speaking. Miller and another nominee, for a federal housing post, both testified with their masks on.

Crapo called Miller “highly qualified” to be the special inspector general, having served as IG for the General Services Administration for nearly a decade.

Miller has been outspoken on the need for inspectors general to have independence and access to information, “and I am confident that he will carry out the responsibilities and mission of this position diligently, independently and objectively,” Crapo said, urging Miller’s confirmation.

Brown appeared to concede Miller’s likely confirmation by the Republican-controlled Senate, telling Miller that if he is confirmed, “I expect you to follow the letter and spirit of the law, and serve the American people – not President Trump. … You must be willing to stand up to the administration and any other bad actor and to uphold the goals of the law. Anything less is unacceptable.”

Noah Bookbinder, executive director of Citizens for Responsibility and Ethics in Washington, said Miller’s nomination is part of a pattern of “roadblocks thrown up” by Trump to block oversight of his administration.

In recent weeks, Trump has fired an inspector general tied to his impeachment and sidelined another who was set to lead a group of inspectors general overseeing the rescue package. On Friday night, Trump moved to replace yet another inspector general, an acting official who criticized the coronavirus response by federal health officials.

Trump also said in signing the rescue law that he will resist oversight provisions.

“All of this taken together means real oversight will be met with retribution, which makes it all the more important,” Bookbinder said.