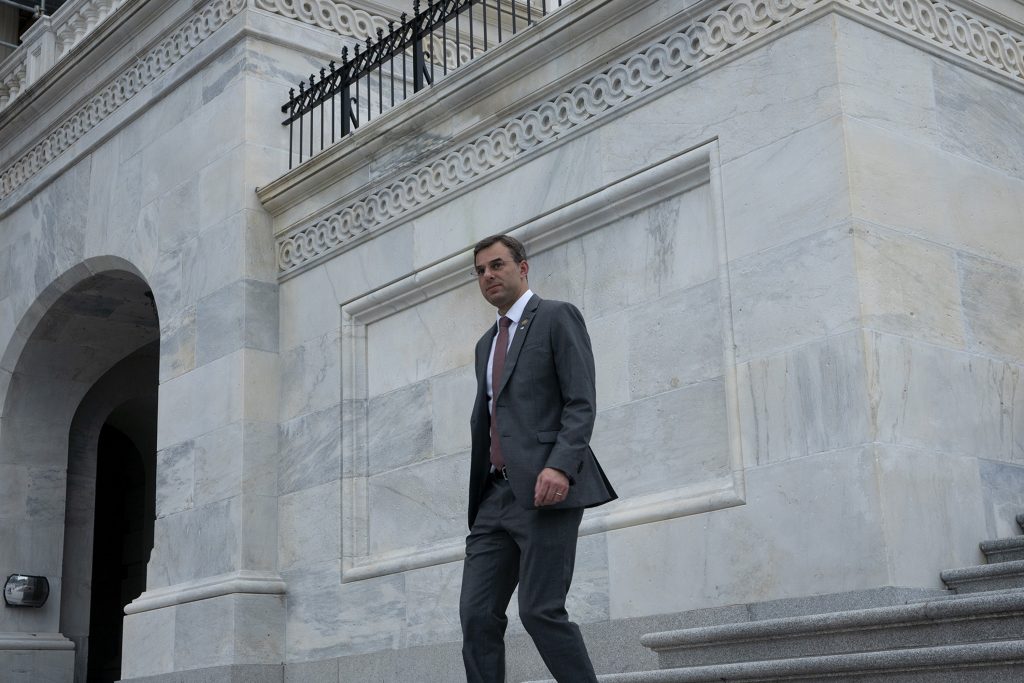 U.S. Rep. Justin Amash, a Trump critic from West Michigan, is weighing a third-party bid for the White House that he said he’s “confident” he could win.

“There’s an urgency. There is a need right now, more than ever, for someone with common sense to stand up to these two parties and to present a strong alternative,” Amash said in an interview.

The Republican-turned-independent congressman announced late Tuesday he has formed an exploratory committee to seek the Libertarian Party’s nomination for president.

He joined the Libertarian Party 10 days ago on his 40th birthday, and now Amash is eyeing the Libertarians’ nominating convention a month away in Austin.

“And that’s what we need right now in Washington. We need someone who can stand up for what’s right, do the right thing regardless of how one party feels about it.”

Amash, who represents the Grand Rapids area, has seen his national profile rise during the last year after he became the only Republican member of Congress to support President Donald Trump’s impeachment.

He helped found the conservative House Freedom Caucus, but believes the GOP under Trump has abandoned many of its core principles. He left the GOP on July 4.

Amash said Trump and Democrat Joe Biden are two of the weakest presidential candidates in the country’s history, saying Biden’s bid looks like a “vanity project,” and that Trump is misguided and “isn’t well in many ways.”

Michigan law bars a federal candidate from filing to run for more than one office in the same election. Amash said his House campaign has been idle since mid-February.

“I’m committed to running for one seat, and I’ve decided to run for president. And that’s what I’ll be dedicating my time to,” he said.

Nicholas Sarwark, chairman of the Libertarian National Committee, said Amash, as a certified dues-paying member of the party, is eligible for the nomination.

“It’s by no means a done deal. He has to fight for it like anyone else would. We welcome him to the race, but our party prides itself in being different from the other two,” Sarwark said.

“There’s no back-room deals, no party leadership putting thumbs on the scale. It’s a clean fight for the nomination.”

A sitting congressman is “automatically” a strong candidate, Sarwark said, but some in the party will be frustrated or opposed to the idea of someone seeking the top of the ticket who hasn’t been a member for many years.

Political analysts say a Libertarian bid by Amash could thwart Trump’s plans to repeat his 2016 win Michigan — or he could hurt Biden by drawing votes in upper Midwest battleground states.

Libertarian presidential candidate Gary Johnson won 3.6% of the vote in Michigan in 2016, when Trump beat Democrat Hillary Clinton by 10,704 votes. But in his home state of New Mexico, Johnson won over 9% of the vote that year.

“Based on how Johnson did in New Mexico, if the last Michigan contest was decided by 10,000 votes, I’m pretty sure having a Michigander — Michiganian? — on the ballot just takes Michigan off the board for the president,” Sarwark said.

Adrian Hemond, CEO of the Grassroots Midwest consulting group in Lansing, said Amash could hurt Trump in Michigan and maybe around the margins in competitive states outside Michigan.

But Hemond doesn’t expect Amash to garner a significant number of votes, given his low name identification and the odds stacked against third-party candidates in national elections.

“A certain amount of this is ego driven because he’s clearly not going to win,” Hemond said of Amash. “But the president only won Michigan by 10,000 votes, so it doesn’t take all that many to have an impact on the election.”

Amid the coronavirus pandemic, it also would be difficult for Amash to build name ID, Hemond said. “It’s hard and expensive to cut through the noise right now,” Hemond said.

Amash said a third-party candidate can win the presidency.

“In history, you can have moments where there’s a sea change, and this seems to be one of those moments where another party can rise up and displace one of the existing major parties, or perhaps both of them,” he said.

“There’s a chance here for a real change.”