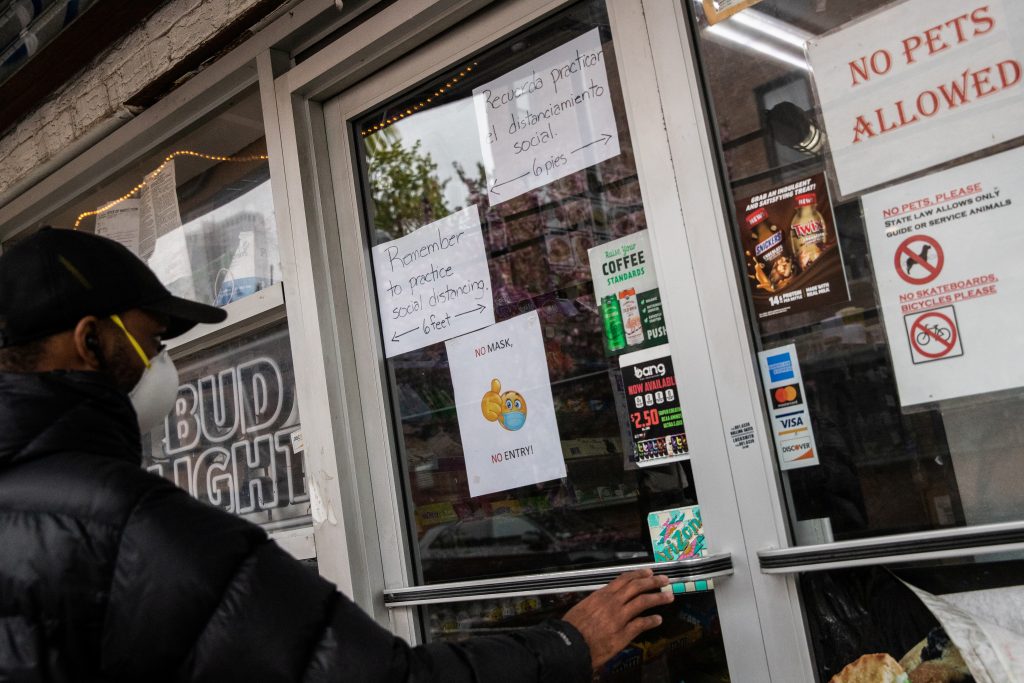 White House coronavirus task force coordinator Deborah Birx on Sunday said social distancing will continue through the summer, as the governors of two U.S. states defended their decisions to reopen their economies.

Birx appeared to contradict Vice President Mike Pence’s comment that the epidemic would be mostly “behind us” by the end of May, saying that social distancing will continue through the summer.

“Social distancing will be with us through the summer to really ensure that we protect one another,” she said on NBC. Birx added that the country needed to have a “breakthrough” in testing for antigens – molecules or molecular structures that trigger an immune response – to get on track for normalcy.

During a radio interview with WTAM in Cleveland on Friday, Pence said, “I think honestly, if you look at the trends today, that I think by Memorial Day weekend we will largely have this coronavirus epidemic behind us.”

Although she said social distancing would continue, Birx expressed optimism that the United States would recover more quickly than earlier global data suggested.

“If you look at these outbreaks over time and you look at places like Louisiana,” Birx said, “if you look at Houston, if you look at Detroit, if you look at how they’ve reached their peak and come down and what those cases look like as they come down, it gives us great hope when you project out Boston and Chicago and certainly the New York metro.”

Despite the encouraging data, Birx added that during conversations with governors about cautiously reopening, “they talk about this not as turning on a light switch, but slowly turning up the dimmer. Very slowly.”

Polis said on CNN that a recent apparent spike in cases was attributable to previous tests that were just confirmed and added to the total, and don’t reflect what is happening.

He said he is focused on social-distancing measures that are sustainable for weeks and months.

“We’ve really been laser-focused on figuring out how we can endure and sustain these kinds of social-distancing measures,” he said. “If we can’t succeed in doing that, the stay-at-home was for nothing.”

Oklahoma Gov. Kevin Stitt, a Republican, also defended his decision to begin reopening businesses in his state on Friday. Stitt said the original purpose of the closures was to build hospital capacity, acquire personal protective equipment and flatten the curve. The closures gave the government time to do so, he said, but it’s time to reopen.

“The facts in our state are: March 30, we peaked in hospitalizations, with 560 across the state,” he said on Fox News, “Today we have 300 across the state in our hospitals. We think it’s time for a measured reopening.”

He noted that there are 80 testing sites across the state. More than 55,000 people have been tested, he said, and the positive rate was 6.3 percent.

He noted that no one is obliged to reopen a business.

“I’m giving guidance. If a restaurant doesn’t feel like they’re ready to reopen,” he said, “they don’t have to.”

Kevin Hassett, an economist temporarily advising the administration on economic policy during the pandemic, painted a dire picture on Sunday.

“Make no mistake, we’re looking at a really grave situation” in economic terms, he said on ABC News.

Over the past five weeks, more than 26 million Americans have filed unemployment claims.

“This is the biggest negative shock that our economy, I think, has ever seen,” Hassett said. “We’re going to be looking at unemployment rates that we saw during the Great Depression.”

He noted that during the recession that began in 2008, a total of 8.7 million jobs were lost.

“Right now, we’re losing about that many jobs every 10 days,” Hassett said. “So the economic lift for policymakers is an extraordinary one.”

Asked whether he agrees with Trump’s rosy forecast of a “V-shaped” or short, sharp economic recovery once the virus threat has passed, Hassett replied, “A lot of it is going to depend on what happens next.”

Key to any recovery, he said, is strong legislation that makes long-run investments to “get ahead of the curve on debt” while “providing short-run stimulus.”

Hassett, a former chairman of the Council of Economic Advisers, called the pandemic “an unprecedented shock to the economy.”

“We’re going to be looking at second-quarter negative GDP growth that’s probably north of minus-15, minus-20 percent,” he said. “That’s the biggest negative shock we’ve seen since the Second World War.”

Hassett also sought to provide some reassurance. The pandemic is a “black swan” event, he said. But because of the bipartisan stimulus legislation, “we haven’t seen 50 other black swans. The markets have been relatively stable. People are getting their money. Firms are not declaring bankruptcy at a rate you might expect.”

Treasury Secretary Steven Mnuchin said that contrary to some predictions, he expects a quick and robust economic recovery.

“As we begin to reopen the economy in May and June, you’re going to see the economy really bounce back in July, August, September,” Mnuchin said on Fox News. “We are putting an unprecedented amount of fiscal relief into the economy.”

Mnuchin also responded to criticism that the federal relief program for small businesses had run out of money so quickly in part because large chunks of it had been taken up by large businesses. He said that larger companies are returning the money and that the next phase of the program will be more focused on smaller companies.

“We launched a brand-new program in an incredibly short period of time. The fact that we ran out of money just goes to show the success of this,” Mnuchin said.

“In the first round, over a million companies had workers of 10 people or below,” he said. “There has been a lot of focus on these bigger companies, public companies. We came out with new guidelines. We made it clear they shouldn’t have applied. They’re paying back the money. I think you’re going to see this move in the right direction. I think you’re going to also see in this round the average loan size go down significantly.”

Mnuchin was also asked about whether the relief programs threaten to pile up unsustainable amounts of federal debt.

“Over time, that is something we’re going to need to look at,” he said. “Right now, we’re in a war, and we have to protect American workers and American business, and we’re going to do whatever we need to take to do that.”

Republican and Democratic governors on Sunday, speaking on ABC News, pushed back against the suggestion by Senate Majority Leader Mitch McConnell, R-Ky., last week that states hit hard by the coronavirus outbreak should be allowed to seek bankruptcy protections rather than be given a federal bailout.

“It’s outrageous for Senator McConnell to even suggest that,” said Michigan Gov. Gretchen Whitmer, a Democrat. “He’s wrong, and we need Congress to step up and help states. … It’s because of this global pandemic that we are all having to make tough decisions. We need the federal government to have our backs.”

Maryland Gov. Larry Hogan, a Republican and chairman of the National Governors Association, said the money is “critical to the rebounding of our economy.” He noted a bipartisan bill in the Senate would send $500 billion to the states and “we have a commitment from the president and the vice president” to provide the support.

“I thought Mitch McConnell probably would regret making that comment the other day – I think it just slipped out,” Hogan said, “but I’m hopeful that we will be able to convince Senator McConnell to go along with the bipartisan bill in the Senate and the administration’s commitment to the states.”

Even Hassett rebuked McConnell. “The constitution doesn’t allow states to declare bankruptcy and so … what’s going to have to happen is that they’re going to have to work things out, and the federal government is probably going to have to help them, too,” he said on ABC News. “The state going bankrupt is something that (was) not really … anticipated by the founders.”

Billionaire Bill Gates said he expected his foundation, the world’s wealthiest charity, to focus on the coronavirus pandemic for the foreseeable future, even at the expense of its other health projects.

“We’ve taken (the Bill & Melinda Gates Foundation) that was focused on … malaria and polio eradication, and almost entirely shifted it to work on this,” Gates told the U.K. Financial Times in a recent phone interview. “This has the foundation’s total attention. Even our non-health-related work, like higher education and K-12 (schools), is completely switched around to look at how you facilitate online learning.”

Although the Gates Foundation initially promised $250 million toward combating the outbreak, Gates said the organization is also committing manpower and expertise. The organization, which has an endowment of more than $40 billion, is collaborating with the World Health Organization and other global health groups.

Gates previously criticized Trump’s decision to cut funding to the WHO’s coronavirus response efforts, calling it “as dangerous as it sounds.” But he told the Financial Times that Trump probably will not go through with it.

“I think he will do deep analysis and decide that they probably should get more money, not less money,” Gates said. “He is impatient, too, about attacks on China for its lack of openness about covid-19 and particularly its reluctance to allow non-Chinese experts to investigate the origins of the coronavirus outbreak in the city of Wuhan.”

Although Gates said he believed that China probably withheld information about the virus, he added that criticism of the Chinese government should be more concrete than just questionable theories that the virus was manufactured in a Wuhan lab.

“I don’t see any deep insights that are missing, in terms of the origin of the disease, that somebody is holding something back,” he said.