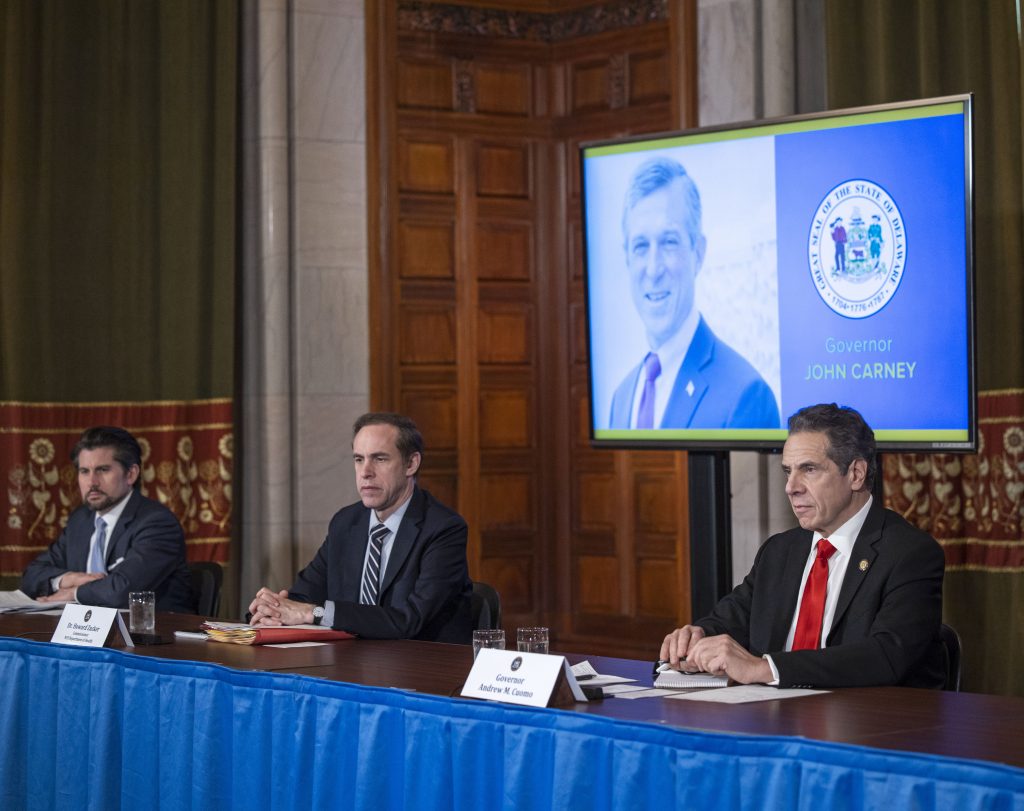 New York Gov. Andrew Cuomo on Tuesday pushed back against President Donald Trump’s claim of “total” authority to reopen the nation’s virus-stalled economy, but also insisted “the president will have no fight with me.”

“We don’t have a king in this country. We didn’t want a king, so we have a Constitution and we elect a president,” Cuomo said at his daily briefing.

The Democratic governor, whose state has become the epicenter of the coronavirus pandemic in the United States, was reacting to Trump’s assertion Monday that “when somebody is president of the United States, the authority is total.”

Cuomo said restarting the economy must be done in a smart, methodical manner or the hard-won gains of the past month could be lost.

Cuomo referenced critical tweets by Trump and said “the president is clearly spoiling for a fight on this issue.” But he said being politically divisive right now would be harmful.

“The president will have no fight with me,” he said. “I will not engage it.”

New York has finally been seeing relief from the steep rise in hospitalizations of recent weeks, though deaths continue to rise alarmingly fast. The state recorded 778 new deaths Monday, for a total of 10,834 in about a month.

Trump made his comments in reaction to moves by governors on both coasts Monday to form multi-state compacts to coordinate reopening society amid the global pandemic.

New York City’s once-overwhelmed 911 system is now seeing a more normal volume of medical calls, a sign the crisis could be ebbing and people are heeding messages to call only in a life-threatening emergency.

The fire department, which runs the city’s EMS system, said it received 3,932 calls requesting ambulances Sunday, down from a record high of 6,527 on March 30. The average volume last March and April was just over 4,000 calls.

Sunday was the sixth straight day that the city’s medical call volume was lower than the previous day. Numbers for Monday will be released later Tuesday.

The fire department said it’s too early to know exactly why volume has dropped.

At the peak, operators were answering four new calls a minute.

The fire department said the heavy volume of coronavirus patients had been pushing response times for the most serious calls to an average of more than 10 minutes, up from about 6½ to 7 minutes under normal circumstances.

MADE IN NEW YORK

“Starting in a few weeks we will be producing here in New York City 50,000 test kits per week with components put together right here, with companies, universities, New York City workers right here building a brand new supply chain to feed this industry that will now develop in New York City,” de Blasio said, adding, “if we can go further, we’re going to build it up rapidly.”

State and city officials have stressed the need to greatly expand coronavirus testing before any relaxation of social distancing guidelines can be contemplated, and health care workers have complained throughout the virus pandemic of shortages of personal protective equipment like gowns and face shields.

De Blasio said the city will purchase 50,000 test kits a week from Indiana-based Aria-Diagnostics and additionally will start producing its own test kits.

He said the names of the companies involved in the initiatives would be announced later.