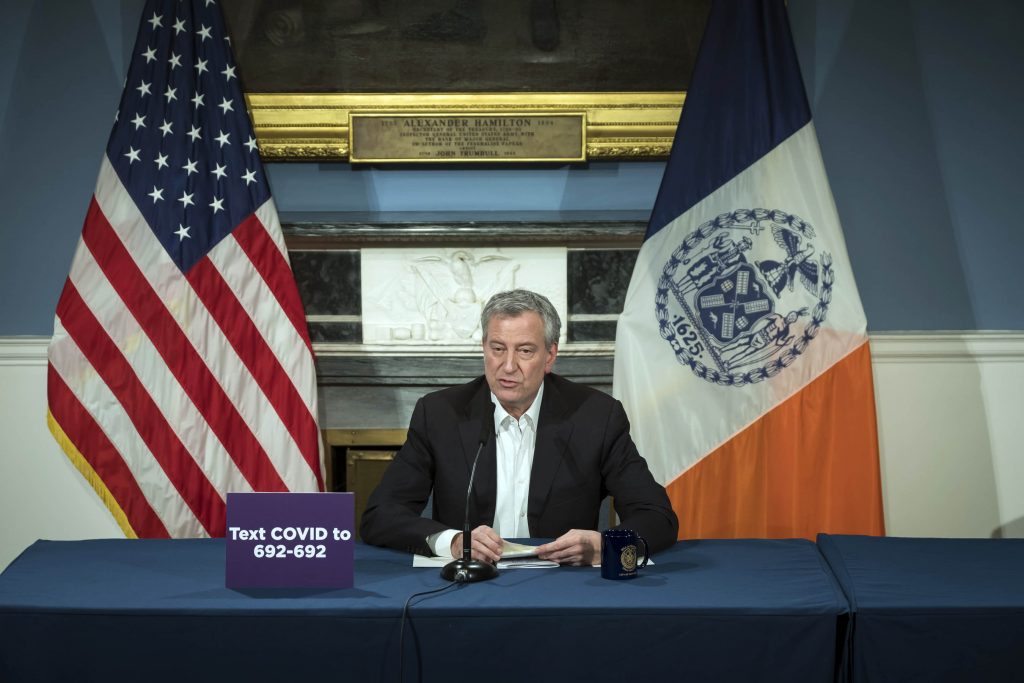 New York City reported its first coronavirus death of a person under 18 years old as the number of fatalities in the epicenter of the U.S. outbreak continued to rise rapidly.

City officials announced Tuesday that 250 more ambulances and 500 paramedics and EMTs are headed to New York to help manage record numbers of calls for assistance. A temporary hospital in a convention center began accepting patients.

New York City’s Health Department recorded the city’s first death of a person under 18 years old, though details about the person’s exact age were not disclosed. There have been 932 coronavirus deaths and 40,900 cases in the city, the department reported Tuesday.

More than 1,500 people have died of COVID-19 across New York state, and more than 75,000 people statewide have tested positive for the virus.

The number of deaths jumped by more than 300 from Monday. A somber-sounding Gov. Andrew Cuomo also said the number of new hospitalizations statewide Monday also was at a high since the outbreak: 1,412.

The outbreak hit close to home for the governor, who spoke of his brother and “best friend,” CNN anchor Chris Cuomo, testing positive for the disease.

“Luckily we caught it early enough. But it’s my family, it’s your family, it’s all of our families. But this virus is that insidious, and we must keep that all in mind,” the governor said.

New York City Mayor Bill de Blasio said Tuesday that he expects the crisis to stretch through May. “For the weeks ahead, let’s not kid ourselves, it gets a lot worse before it gets better,” de Blasio said on NBC.

A temporary hospital built inside a New York City convention center began accepting patients and a nearby Navy hospital ship was expected to take in patients as early as Tuesday.

Beds at the Jacob K. Javits Convention Center and the USNS Comfort are designed to take pressure off New York City hospitals as coronavirus cases spike. The combined 2,000 beds were added to handle non-coronavirus patients.

The emergency hospital sites at the convention center began taking patients Monday night, according to the governor’s office. The Navy said Tuesday morning that the ship docked off Manhattan was expected to accept patients soon.

In one snapshot of the situation in the region’s hospitals, Northwell Health said Monday it has 2,200 coronavirus patients being treated at its facilities, triple the number from a week ago.

The company said several of its hospitals are at or near capacity, including Long Island Jewish Medical Center, Mather Hospital in Port Jefferson and Glen Cove Hospital.

FEMA has sent new supplies of masks and ventilators, the company said.

MORE AMBULANCES ON THE WAY

New York City officials and the Federal Emergency Management Agency announced a partnership Tuesday to bring 250 more ambulances and 500 paramedics and emergency medical technicians from around the nation to the city.

“Our EMTs and paramedics are doing unbelievable work under the toughest of circumstances,” de Blasio said in a statement. “Our partnership with FEMA will give our first responders the help they need to continue being the heroes of our city.”

The city’s Emergency Medical Service has been responding to record numbers of emergencies since the COVID-19 crisis hit this month. Calls for assistance have been up by 50% over normal daily call volume.