Regional On NYC’s Front Lines, Health Workers Worry They Will Be Next
Regional 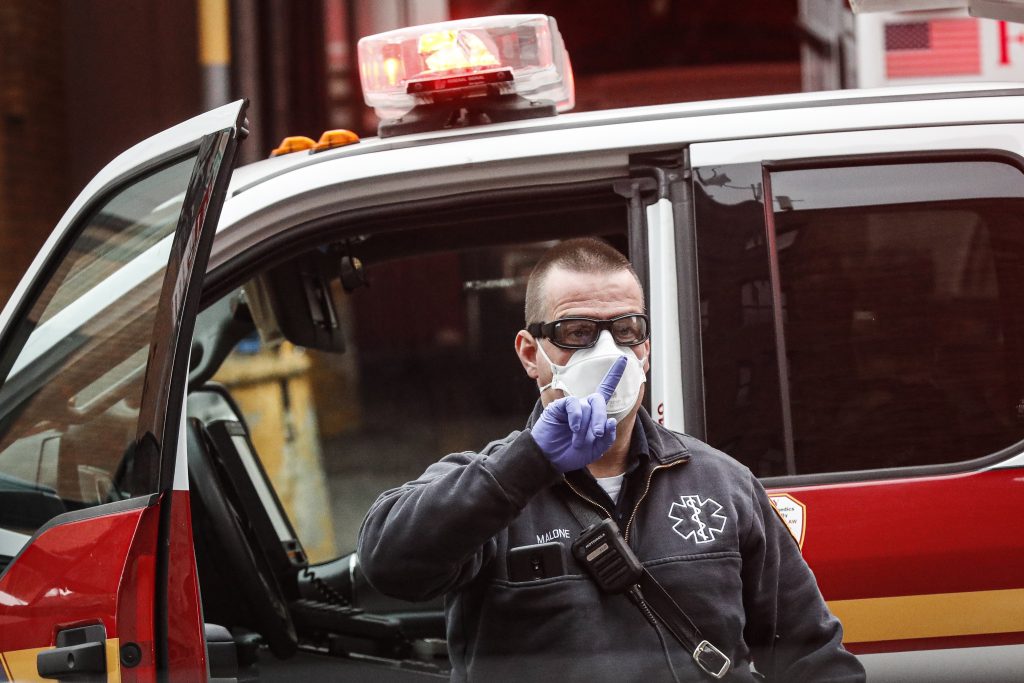 A nurse died from coronavirus after working nonstop for weeks at a hospital where staffers frustrated with dwindling supplies posed in gowns made of trash bags. An emergency room doctor fears he had the virus long before getting too sick to work. Another nurse worries the lone mask she’s issued each day won’t be enough to protect her from an unending tide of hacking, feverish patients.

At New York City-area hospitals on the front lines of the biggest coronavirus outbreak in the nation, workers are increasingly concerned about the ravages of the illness in their own ranks, and that the lack of testing and protective gear is making it not a matter of if they get it, but when.

“Our emergency room was like a petri dish,” said Benny Mathew, a nurse at Montefiore Medical Center who got word Thursday that he had COVID-19 and is now worried he may infect his wife and two daughters.

“I’m angry. We could have secured enough personal protective equipment months ago. It was happening in China since December,” he said. “But we thought it was never going to happen here.”

Some hospitals have had so many dying patients that the city brought in refrigerated truck trailers for bodies as a precaution. At Elmhurst Hospital in Queens, 13 people succumbed to the virus in one day. City ambulances have seen a surge in calls, responding to nearly 5,800 on Thursday alone.

Several doctors, nurses and paramedics told The Associated Press of deteriorating working conditions in emergency rooms and ICUs that make caretakers even more vulnerable. Sick patients are placed in beds packed end-to-end. Limited supplies of face masks, gowns and shields have them wearing the same protective equipment all day. A lack of available ventilators could soon put doctors and nurses in the agonizing position of prioritizing who gets them and who does not.

“We just have to hope we don’t get infected,” said William da Silva, a nurse at St. Vincent’s Hospital in suburban Westchester. “People are going back to work with COVID-19, and they’re going to infect the patients and each other.”

Da Silva is certain he’s been infected, but he said he’s been getting the run around from officials all week as he seeks to get tested. Self-quarantined with his wife and toddler, he’s so disillusioned by how he’s been treated that he may not go back.

“I’ve put them all at risk,” Da Silva said of his family. “I don’t think I want to go back to that environment after this because apparently we don’t matter. I can’t continue working in hospitals after this.”

While the city has meticulously tracked the toll of its outbreak — reporting 21,873 infections, 281 deaths and at least 3,900 hospitalized as of Thursday — officials say they do not have numbers on how many health care workers are sick or dying.

Hospital operator Northwell Health said 155 of its 72,000 employees have tested positive for coronavirus. The New York State Nurses Association said at least 67 nurses had been infected. The union for the city’s EMS workers said more than 50 had tested positive and more than 400 are showing symptoms. One of them, paramedic Christell Cadet, is in critical condition in a Brooklyn ICU.

It’s been a common theme as the virus has spread around the world.

In China, where the outbreak started, over 3,000 medical workers are believed to have been among the more than 80,000 people infected. Health-care workers account for about one-tenth of the more than 74,000 infections in Italy, and roughly one-eighth of the 47,600 cases in Spain.

In New York City, at least one health-care worker has been killed by coronavirus.

A nurse who worked with Kelly for eight years fell ill at the same time. Emailing the AP from her sick bed, she said Kelly had worked as a supervisor for weeks without a break since the coronavirus started taking hold in New York. She shared her thoughts on condition of anonymity because she said hospital policy threatens employees with termination for speaking to the media.

“He was helping nurses on the floor, pushing beds, transferring patients,” said the nurse. “A couple weeks before his death we were talking about his future plans and he was telling me that he would go back to school. I am devastated about his death and cannot stop crying.”

In a statement Thursday, Mount Sinai Health System denied that the nurses depicted in trash bags were actually using them as protective gear since the real gear could be seen beneath the bags. “This crisis is straining the resources of all New York area hospitals and while we do – and have had – enough protective equipment for our staff, we will all need more in the weeks ahead,” it said.

New York Gov. Andrew Cuomo acknowledges the ranks of health-care workers are thinning while also claiming “no hospital, no nurse, no doctor can say legitimately, ‘I don’t have protective equipment.’”

Medical specialists from other areas have been redeployed to emergency rooms and ICUs, and a volunteer force of 40,000 retired doctors, nurses, therapists and technicians will soon answer the call for reinforcements.

Montefiore emergency-room nurse Judy Sheridan said personal protective equipment are “clearly not being made available in any meaningful way to front line caregivers” and reusing masks will only make them susceptible to contamination.

“This is like telling a person, ‘Here are three piece of toilet paper — make that last for a week!’” said Sheridan, who is also president of the State Nurses Association.

Barbara Rosen, a registered nurse in New Jersey for more than four decades and a vice president of the Health Professionals and Allied Employees union, said members are “scared to death.”

“You’re being torn between going out and doing your duty, what you were born to do, which is to take care of sick patients, and getting sick yourself and bringing it home to your family,” she said.

While coronavirus causes mild or moderate symptoms in most people, older people and those with existing health problems could have a more severe illness, including pneumonia and death.

Rosen said her union has also heard from nurses using garbage bags to protect their clothing and receiving expired masks that could have decomposed elastic bands, compromising safety. She called the lack of resources “unheard of in the medical profession. It’s like going into a three-alarm fire with a water pistol.”

Mayor Bill de Blasio vowed Thursday to get health-care workers the supplies they need: “One way or another, we’re going to get them to you every day,” he said, adding that the city has enough supplies for this week, at least.

In another effort to bolster the ranks of health-care workers, the state is taking up an offer from New York University’s medical school to allow students who completed their final year of training to become doctors immediately and help in the city’s hospitals.

For Evan Gerber, among about 60 NYU fourth-year medical students who have accepted the battlefield promotion, the furor over personal protective equipment is indeed weighing on his mind.

“Of course I’m a little bit nervous to jump into this … anybody would be,” said the 26-year-old from the Phoenix area. “It’s definitely one of the risks that you take when you enter medicine. One of the big things that’s driving fear here is the unknown.”