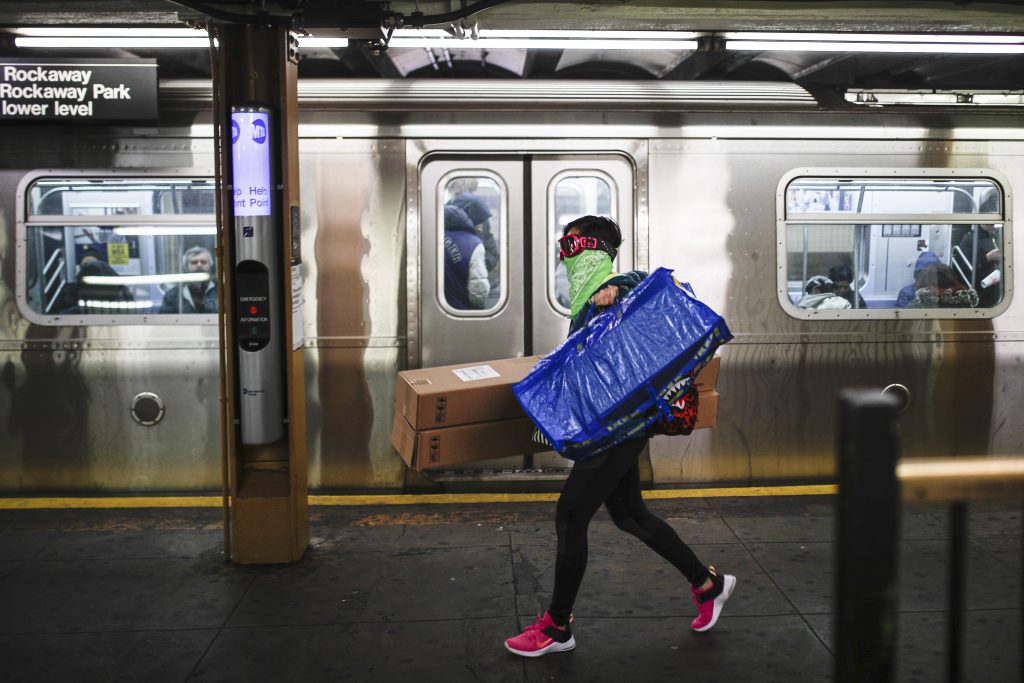 The Democratic governor said the “drastic action” was needed to check the rapid spread of the coronavirus virus in a state with more than 7,000 confirmed cases, the most in the nation. New York’s restrictions, effective 8 p.m. Sunday, come a day after California decided to all but confine its population in the biggest lockdown in the U.S.

“No, this is not life as usual,” Cuomo said at a news conference. “Accept it, and realize it, and deal with it.”

New York officials said more than 1,200 people have already been hospitalized since the outbreak, and new restrictions are needed to keep the health-care system from being overwhelmed. Johns Hopkins University put the state’s fatality count at 38.

Nonessential gatherings of individuals of any size or for any reason are canceled or postponed, including parties and celebrations. Essential workers will be able to gather and people will be able to walk outside or take part in non-contact activities, but no “playing basketball with five other people,” Cuomo said.

Public transit will keep running, but individuals besides essential workers can only use public transportation when absolutely necessary, under the state’s new rules.

People will need to stay at least 6 feet away from other people when they are out in public, Cuomo said.

The new restrictions were met with resignation by some people in New York City, where museums, clubs and restaurants have already been shuttered.

Edjo Wheeler, 49, who runs an art center, said he knows a couple of people who are already flat on their back with what feels like an awful flu.

“I truly believe it’s happening,” Wheeler said. “That makes me walk around with my hands in my pocket to make sure I’m not touching things. I might have it and I might be able to pass it on to somebody else. It’s not about me getting it. I’m not really the in-danger population, but we all have to cooperate.”

Stricter rules are in place for people over 70, people with compromised immune systems and those with underlying illness. They should pre-screen all visitors and aides by taking temperatures and avoid visiting houses with multiple people. All vulnerable people should wear a mask when around others, and everyone in their presence should wear a mask.

Additionally, only essential businesses can have workers commuting to the job or on the job, Cuomo said. That order tightens previous work-from-home restrictions that exempted businesses providing certain services, including media, warehouses, grocery and food production facilities, pharmacies, health-care providers, utilities and banks.

Cuomo said there will be civil fines and mandatory closure for any business not in compliance.

“These provisions will be enforced” he said. “These are not helpful hints.”

For most people, the coronavirus causes only mild or moderate symptoms, such as fever and cough. For some, especially older adults and people with existing health problems, it can cause more severe illness, including pneumonia, or death. The vast majority of people recover.

A Long Island retirement community said Friday that three residents have died of the coronavirus and 12 others have tested positive.

All three were in assisted living, had underlying medical conditions and two were receiving end-of-life care, Peconic Landing said in a statement. The disease, known as COVID-19, was discovered in an employee March 10.

Of the other residents who have tested positive, one is in the hospital, one is on hospice care that began before the diagnosis and the rest are in stable condition and isolation at the facility.

“We offer our deepest thoughts and condolences to the families and loved ones these members leave behind,” said Peconic Landing board chairwoman Carol Hance. “The detection and spread of COVID-19 on our campus has been unprecedented.”

The community has suspended visitations because of the coronavirus outbreak.

A public defenders group demanded the immediate release of 116 New York city jail inmates they say are vulnerable to the coronavirus.

A lawsuit filed Friday by The Legal Aid Society says the plaintiffs are older and sick inmates who are being held while they wait for trial or because they violated parole. Continuing to jail them “constitutes a deliberate indifference to the risk of serious medical harm,” it says.

A jail oversight board had already called for the immediate release of all high-risk inmates after an investigator assigned to the jails died from COVID-19, the disease that causes the virus.

The city’s jail system has about 8,000 inmates, most at notorious Rikers Island. At least one inmate there has tested positive for the virus.

A city Law Department spokesman said the suit was under review.