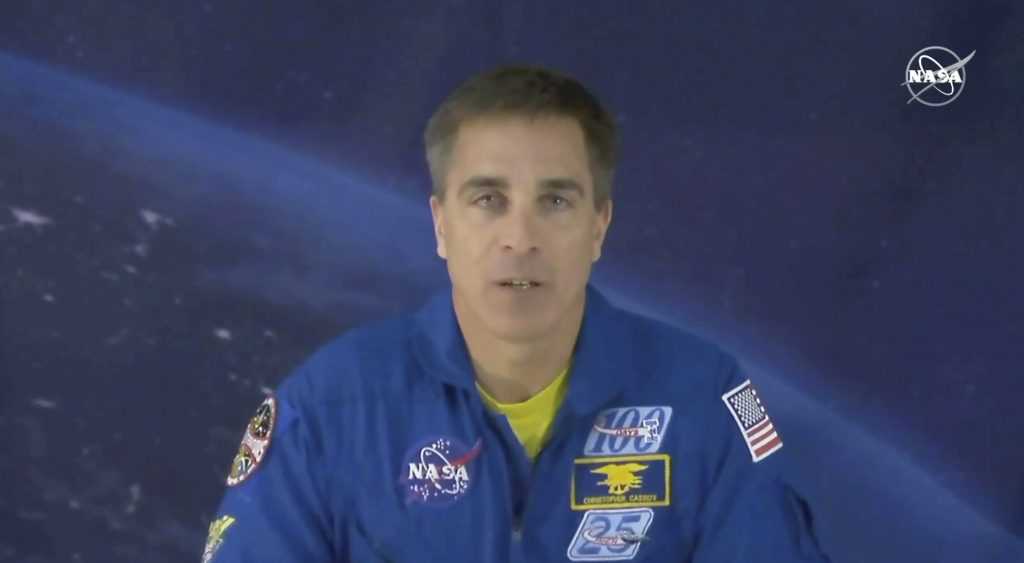 A NASA astronaut who’s about to leave the planet for six months will blast off without any family or fanfare because of the coronavirus.

Chris Cassidy said Thursday that he won’t have any guests at his April 9 launch from Kazakhstan. He expects to say goodbye in Russia to his wife, Julie, on Friday, three weeks earlier than planned.

Because of the coronavirus outbreak, she’s going back home to Houston. One of their three children, meanwhile, is trying to get back to the U.S. from New Zealand.

There will be a smaller team than usual at the launch pad, too.

“It really is going to be strange,” Cassidy told The Associated Press from cosmonaut headquarters in Star City, Russia.

He said he’s already in quarantine ahead of his launch to the International Space Station.

“It’s not like any other time in our lives as a generation, really, right?’ said the 50-year-old Navy captain and former Navy SEAL. “I’ll have my own interesting story to tell in years to come.”

Cassidy is also dealing with a rare late-in-the-game crew switch. He’ll spend 6 1/2 months on the space station with two Russians assigned to the flight just a month ago, after one of the original cosmonauts suffered an eye injury.

While training together to catch up, Cassidy, Anatoly Ivanishin and Ivan Vagner have been taking precautions to stay germ free, frequently washing their hands and keeping a safe distance from others.

The space station crew will drop from six to three a week after his arrival. It will remain at three people until SpaceX launches two NASA astronauts, as early as May, or another crew arrives on a Russian Soyuz capsule in the fall.

With only three people on board, it promises to be extraordinarily busy.

“That doesn’t bother me at all,” Cassidy told the AP. “In fact, I’m excited. Bring it on.”

Cassidy, Ivanishin and Vagner leave Tuesday for the Baikonur Cosmodrome in Kazakhstan. They will be isolated there in a special hotel for astronauts, as is customary. But on launch day, there won’t be the usual cheering, back-slapping throngs of well-wishers or journalists either.

Their families, bosses and dozens of others normally jam a special room behind a glass wall while the astronauts put on their spacesuits before liftoff.

“We’ll be looking through the glass at maybe one video camera or something like this and then we’ll get on the bus” to go to a launch pad with a minimal team there, Cassidy said.

As for the Feb. 19 crew switch, Cassidy, from York, Maine, initially was “crushed” by the news. The former chief of NASA’s astronaut corps and two-time space flier, Cassidy already knew the backup cosmonauts..

“So no issues there,” he said. However, “my heart hurt for my two friends who thought they were so close to a rocket launch and were not going to get one,” he told the AP.

Invanishin, like Cassidy an experienced spaceman, said earlier this week that he’s surprised to be suddenly rocketing away, “but life happens.” He said the crew swap could have occurred even closer to launch and so the three have had “some time for the news to settle in.”

Cassidy acknowledges his stress level is higher than usual right now from worrying about his loved ones.