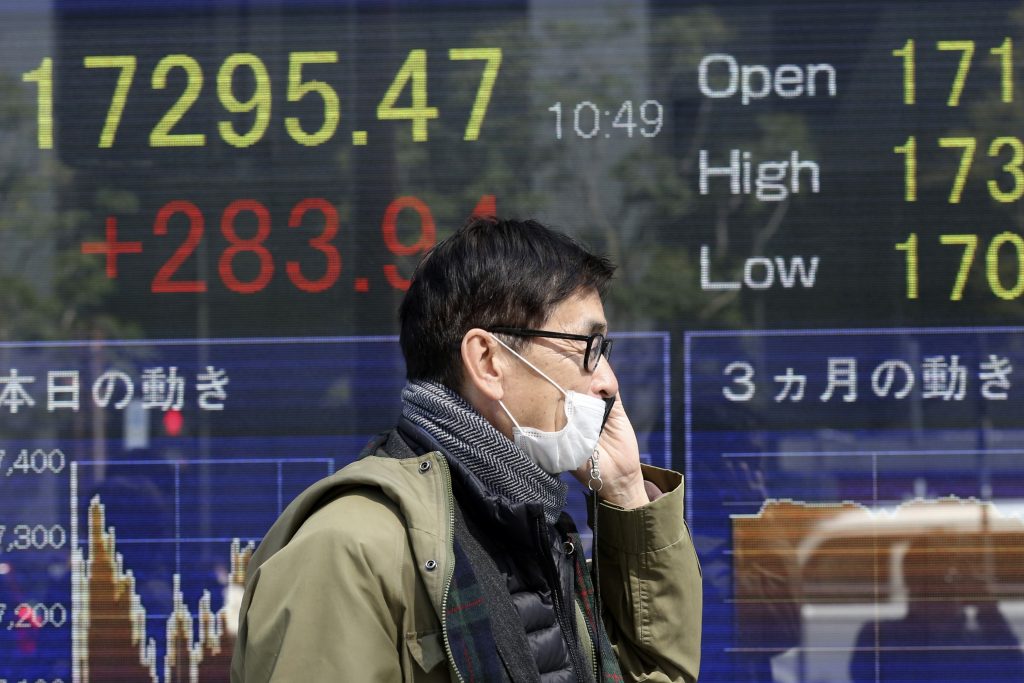 Major Asian stock markets fell back after early gains on Wednesday after Wall Street jumped on President Donald Trump’s promise of aid to get the U.S. economy through the coronavirus outbreak.

The White House proposal could approach $1 trillion in spending to ward off the pressure of business closures to contain the virus. The Federal Reserve announced more measures to keep financial markets operating.

On Wall Street, the benchmark S&P 500 index rose by an unusually wide daily margin of 6%, regaining just under half of the previous day’s history-making loss. Professional investors expect more big daily swings in both directions until the spreading virus is brought under control.

Treasury Secretary Steven Mnuchin said Trump wants to send checks to Americans in the next two weeks to help support them while more parts of the economy come closer to shutting down.

That is a good start but investors need to see the number of infections slow before markets can find a bottom, analysts said. The number of new cases reported in China, where the virus emerged in December, is declining but infections in the United States, Europe and elsewhere are increasing.

There are “green shoots of risk appetite emerging, and some further concerning aspects,” said Chris Weston of Pepperstone Group in a report. “I am not going to call a bottom in the risk story by any means.”

Those three markets account for the bulk of the region’s stock value.

For most people, the coronavirus causes only mild or moderate symptoms, such as fever and cough, and those with mild illness recover in about two weeks. Severe illness including pneumonia can occur, especially in the elderly and people with existing health problems, and recovery could take six weeks in such cases.

On Tuesday, European stocks swung from gains to losses and back to gains.

The virus has spread so quickly that its effects haven’t shown up in much U.S. economic data yet.

On Tuesday, a report showed retail sales weakened in February, when economists expected a gain. A separate report a day earlier showed manufacturing in the state of New York contracting.

“The global recession is here and now,” S&P Global economists wrote in a report Tuesday.

Brent crude, the international standard, gained 6 cents to $28.79 per barrel.