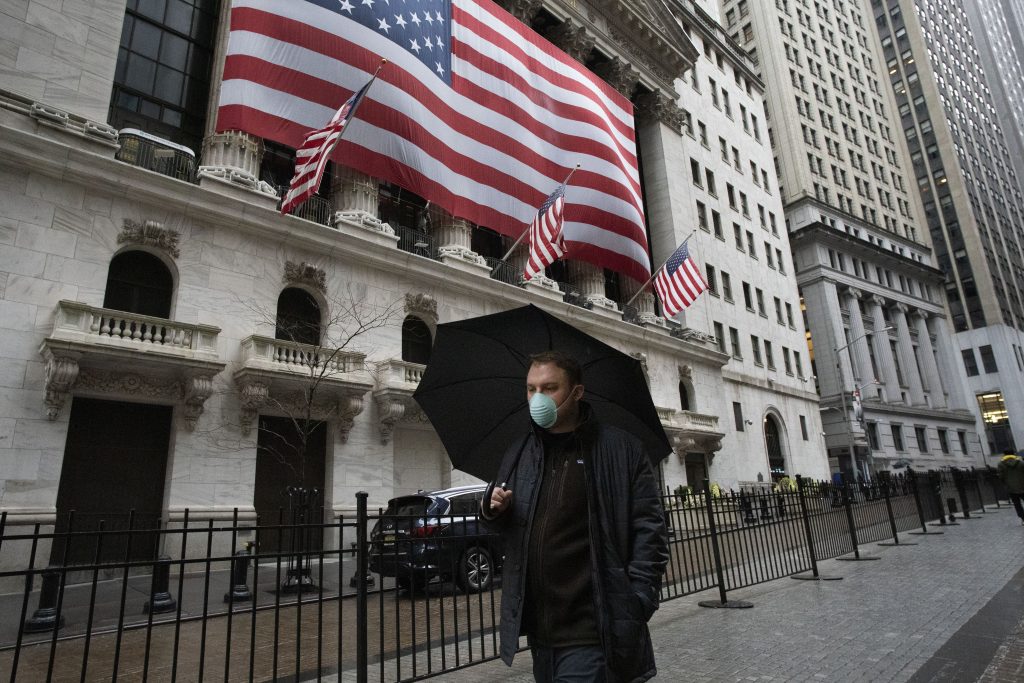 Stock indexes bounced around in early trading Tuesday as investors try to regroup from a punishing day of losses.

Markets remain highly volatile a day after their worst loss in three decades as traders remain uncertain about how badly the coronavirus will hit the economy.

The Dow Jones Industrial Average jumped more than 600 points in early trading, fell 200, then was nearly unchanged after the first half-hour of trading. It lost nearly 3,000 points a day earlier after President Donald Trump said a recession may be on the way.

The Trump administration is proposing a roughly $850 billion stimulus plan to help the economy, including relief for small businesses and the airline industry, as well as a tax cut for wage-earners, sources told The Associated Press.

The travel industry has been among the industries hardest hit by the outbreak, as planes sit grounded and hotels have shut their doors. Some economists say the global recession has already begun.

The S&P 500 jumped as much as 3.2% in the first minutes of trading, but the gains quickly vanished and the index was up just 0.1% at mid-morning.

Trading is unsettled around the world. European stocks swung from gains to losses. South Korean stocks fell to their fifth straight loss of 2.5%, but Japanese stocks shook off an early loss to edge higher.

Stocks have had a few rebounds since the market began selling off in mid-February on worries that COVID-19 will slam the economy and corporate profits. But all have ended up short-lived. The S&P 500 has had four days in the last few weeks where it surged more than 4%, a remarkably large amount in normal times, and has slumped more than 2.8% the following day each time.

The S&P 500 is nearly 30% below its record set last month and is back to where it was in late 2018, erasing most of the best year for stocks in decades.

The big question for investors is when the new coronavirus will slow its spread, and when the economy can begin to recover from shutdowns affecting a growing list of industries by the day, from airlines to restaurants.

The virus has spread so quickly that its effects haven’t shown up in much U.S. economic data yet. A report on Monday about manufacturing in New York State was the first piece of evidence that manufacturing is contracting due to the outbreak. On Tuesday, a report showed that retail sales weakened in February, when economists had been expecting a gain.

“The global recession is here and now,” S&P Global economists wrote in a report Tuesday.

They say initial data from China suggests its economy was hit harder than expected, though it has begun to stabilize. “Europe and the U.S. are following a similar path,” the economists wrote.