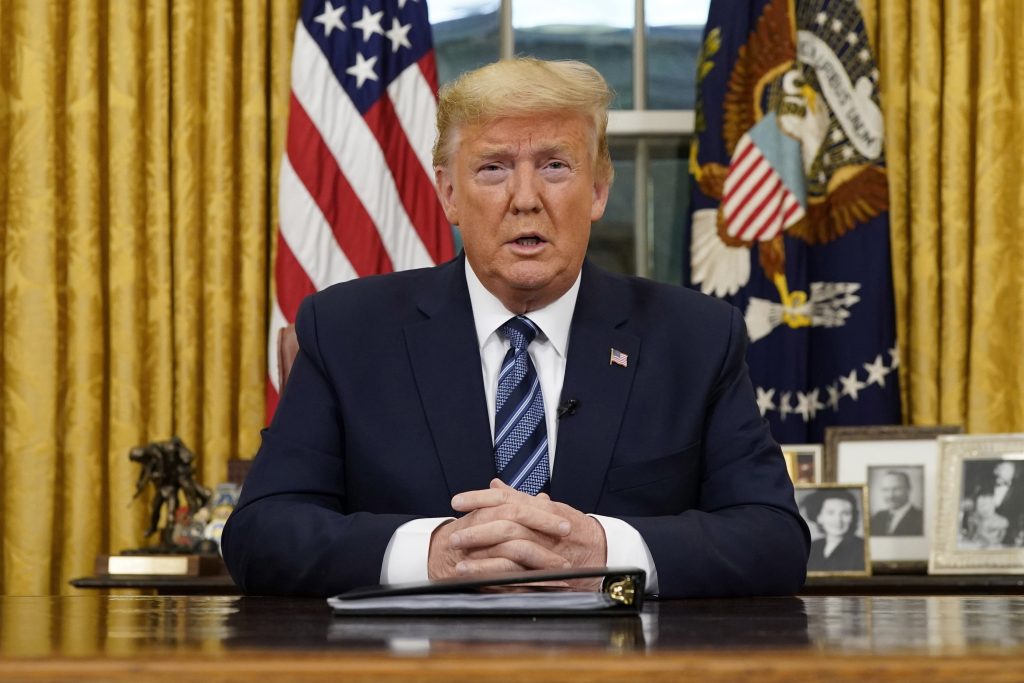 President Donald Trump said Wednesday he is suspending all travel between the U.S. and Europe for 30 days beginning Friday as he seeks to combat a viral pandemic.

Trump made the announcement in an Oval Office address to the nation, blaming the European Union for not acting quickly enough to address the “foreign virus” and saying U.S. clusters were “seeded” by European travelers.

“We made a lifesaving move with early action on China,” Trump said. “Now we must take the same action with Europe.”

Trump said the restrictions won’t apply to the United Kingdom and the U.S. would monitor the situation to determine if travel could be reopened earlier.

Trump said he was also directing agencies to provide unspecified financial relief for “for workers who are ill, quarantined or caring for others due to coronavirus,” and asked Congress to take action to extend it.

Trump said the U.S. will defer tax payments for some individual and business filers for three months to lessen the impacts of the virus outbreak. He said the Small Business Administration will also make low-interest loans available to businesses to help them weather the storm.

“This is not a financial crisis,” he said. “This just a temporary moment of time that we will overcome together as a nation and as a world.”

Trump also reiterated his call on Congress to pass a cut to the federal payroll tax in order to stimulate the economy.

Trump said “we are marshaling the full power” of the government and private sector to protect the American people.

“Protecting the American people from threats to their safety is the most important job of the president of the United States, said Secretary Wolf. “The actions President Trump is taking to deny entry to foreign nationals who have been in affected areas will keep Americans safe and save American lives.

“In January and February, the Administration issued similar travel restrictions on individuals who had been in China and Iran. That action proved to be effective in slowing the spread of the virus to the U.S., while public health officials prepared,” the secretary said.