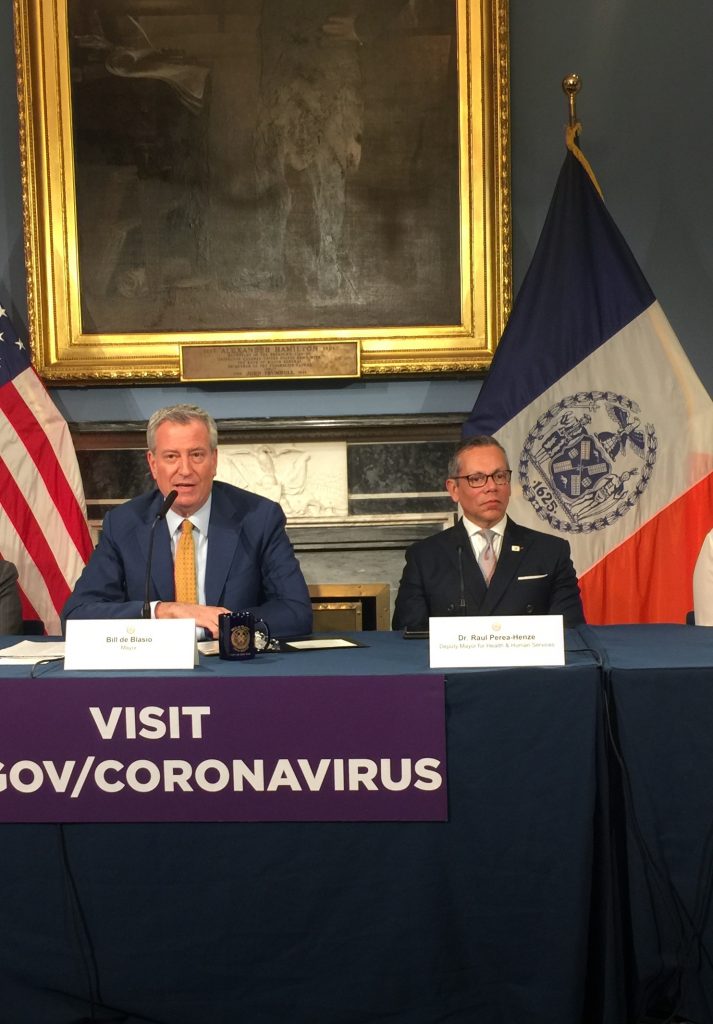 New York City Mayor Bill de Blasio said Wednesday he is “reticent” to institute major closures and other uses of his emergency powers in response to the coronavirus pandemic, focusing instead on precision responses and public education.

The number of confirmed cases in the city now stands at 53, the mayor said at a press briefing for ethnic and community media Wednesday afternoon, shortly after the World Health Organization had classified the outbreak as a pandemic.

There are around 120,000 confirmed cases of the virus worldwide, including over 4,200 deaths. Some of the hardest-hit countries, like China, South Korea and Italy, have enacted severe restrictions such as large-scale quarantines, lockdowns and public-gathering bans in an effort to contain the disease. While the United States has instituted some flight bans, and state and local governments have imposed or requested quarantines on people arriving from certain countries or who have come into contact with a coronavirus patient, the federal and local governments in the U.S., which has seen over 1,000 cases and more than 30 deaths, have largely taken a less-aggressive internal response to the crisis than the hardest-hit countries.

De Blasio said Wednesday that while officials are constantly monitoring the situation, at this point he’s “reticent to take the kinds of actions that might cause a huge number of unintended consequences and other negative dynamics.”

School closures, for example, would be addressed “not with a sledgehammer,” said de Blasio, “but with a scalpel, not with a full closure of vast numbers of schools for long periods of time, but with a very pinpoint approach to addressing the specific school.”

“Families depend on those schools for a safe place for those kids,” said the mayor. “They have no alternative in some cases as a place to get their children quality food and nutrition. By the way, families want to make sure their kids get educated. We all care about health and safety first, but the notion of losing months and months of our children’s education should be very troubling to all of us.”

The city is focusing instead on an education campaign to minimize the spread of the disease.

A multilingual advertising and informational campaign instructs on proper hand-washing and hygiene, essential to containing the spread of a virus that officials say is generally spread by particles from an infected person’s cough or sneeze getting into another person’s eyes, nose, or mouth. The city is also urging anyone who feels the virus’ symptoms – a fever of at least 100.4 degrees Farenheit as well as a respiratory issue like coughing or shortness of breath – to remain home for at least 48 hours. If, after 48 hours, their situation does not improve, the person should call their doctor who will advise on next steps, including a possible COVID-19 test.

The city is also recommending that people try to avoid large crowds, such as by telecommuting rather than working from the office; staggering work hours, minimizing the number of people in the office at once and easing crowds during rush hours; and avoiding tightly packed train cars.

At least 80 percent of people who contract the virus typically recover quickly. Risk rises with the elderly or those with preexisting conditions like lung or heart disease, diabetes, cancer or a weakened immune system.

Health care will be provided to possible coronavirus patients regardless of immigration status or ability to pay. The city is also encouraging those coping with anxiety or other mental strain over the pandemic to obtain mental-health services by calling 888-NYC-WELL.

The New York City Department of Education has said it would provide free sanitizing supplies to both public and private schools.

But administrators of several yeshivas who spoke with Hamodia have described the items provided as negligible: The yeshivas, with hundreds of students, each received one bottle of bleach, one package of paper towels, and three or four bars of soap. Informed of this issue by a Hamodia reporter Wednesday, de Blasio replied, “That’s unacceptable.”

“The DOE is a massive operation. It has the resources to support these other schools in a time of crisis,” said the mayor, vowing, “We’ll fix it.”

De Blasio announced earlier in the week that the city would provide assistance to small businesses who have been suffering from the coronavirus outbreak. Businesses with fewer than 100 employees that have experienced sale drops of at least 25% may receive zero-interest loans up to $75,000. Businesses with fewer than five employees are eligible for a cash grant to cover 40% of payroll costs for two months (an average of $6,000) so that the businesses can avoid layoffs.

Though Health Commissioner Dr. Oxiris Barbot earlier in the week said the outbreak may last until September, the mayor said Wednesday he would avoid, unless absolutely necessary, utilizing his emergency powers to enact severe restrictions.

“We are not rushing with great joy to the notion of shutting everything down,” said the mayor, noting that Italy, a country of 60 million people under virtually complete lockdown, will take “years to recover from that level of shutdown.”

“We’re trying to strike a balance,” said the mayor. “Every day will be a new day in terms of assessing the information we have.”