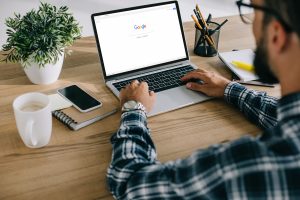 Leading Maryland lawmakers seeking a way to help pay for a $4 billion, 10-year education plan came up with what they consider an innovative idea of where to get the cash: deep-pocketed internet companies.

The Democratic proposal would tax Facebook and Google for every ad the companies run on the computer screens of Maryland residents visiting their sites. If passed, the plan would make the Old Line State the first in the nation to raise revenue by taxing online advertising.

“Massive technology corporations have ballooned in size and influence over the last two decades,” wrote Maryland Senate President Bill Ferguson, a Democrat, in an email to Stateline. “This legislation starts to make sure that these corporations pay their fair share in contributing to building our state’s core educational institutions.”

A Nebraska bill would sweep internet ads into overall sales tax. New York policymakers would take a different approach to the same goal: taxing internet companies on the personal information they collect from any state resident who visits their sites. Many other states may follow suit if they see a new source of money opening to pay for needed services.

Supporters of the bills say it’s time for wealthy internet companies to pay a larger share of taxes, especially when companies are profiting off residents’ time and private information. But opponents argue the measures are unfair, impractical and bad for the economy.

Massive amounts of money are at stake in the fights. Facebook and Google are expected to account for about half of the $385 billion global digital ad market in 2020, according to eMarketer, a firm that tracks digital advertising.

Facebook alone could make between $38 million and $76 million in a one-time sale of users’ data, according to an estimate by Investopedia, a financial advice website.

Ulrik Boesen, a senior policy analyst at the Tax Foundation, which argues for lower, more broadly based taxes, said any internet advertising tax that targets only large entities is too narrow and that the burden should be more widely shared.

And bills that target data collection might turn out to be even worse, he argued, if states use definitions that are too loose.

“Almost all businesses would be in some way liable,” he said, “because collecting phone numbers from your customers or having a loyalty program … and using that to generate a profit could fall under the non-definition of data.”

Separately, Maryland legislative leaders last week introduced an alternate way of paying for the education plan — a broad expansion of sales taxes to many services to raise an estimated $2.6 billion. The sales tax rate would drop from 6% to 5%, but since it would apply to a broader range of services, it would raise more money.

Maryland Gov. Larry Hogan, a Republican, condemned the proposed tax expansion. “It’s not ever going to happen while I’m governor. I can promise you,” Hogan said.

The Maryland internet bill would assess up to a 10% excise tax on revenue that large companies earn from selling digital ads that target Maryland IP addresses. Firms with less than $100 million in annual ad revenue would be exempt, meaning that the bill would affect only the largest internet companies, such as Google and Facebook.

The Maryland bill is estimated by sponsors to raise $250 million a year.

But opponents say the measure is unfair to single out online ads.

“As it’s written today, it applies to only one type of media — digital — not our Baltimore Sun friends or TV,” said opponent state Sen. Andrew Serafini, a Republican, in a phone interview. “You can’t just pick one form of advertising.”

Opponents also say that the legislation would be complicated, noting it took years and a 2018 U.S. Supreme Court ruling in the Wayfair case to allow states to collect sales taxes from all online purchases. States still must write and put into effect the statutes and rules to make that happen.

“The proponents say the Wayfair decision took many years to work out,” Serafini added. “I’m concerned that the children in kindergarten today might be high school graduates before this gets worked out.”

The Internet Association, a national lobbying group that represents online businesses including Facebook, Google, eBay and many others, said in a letter to the Maryland legislature that the tax would be “discriminatory and punitive.” The letter, from Senior Vice President Robert Callahan, also maintained that the bill would “likely” violate the federal Permanent Internet Tax Freedom Act.

That law, signed in 2016, prohibits states or the federal government from imposing “discriminatory taxes on electronic commerce.”

But economist Paul Romer, a Nobel laureate and internet expert who supports the Maryland bill, said that overall the “market for digital services is broken, and a tax on digital advertising can help restore the conditions we need to get the market to work.”

He expanded on this theory in a New York Times op-ed, saying large digital companies like Facebook and Google profit from creating a “haven for dangerous misinformation and hate speech that has undermined trust in democratic institutions.” A tax on advertising that uses personal data to target ads would force the large platforms to go to an ad-free, subscription-based model instead, he said.

Ferguson, the bill’s sponsor, said in his email that he and other supporters will “continue to work with Maryland-based businesses to ensure that all companies will be able to comply with the legislation, and address all Constitutional issues, and I am confident this legislation will pass this session.”

An analysis of the Maryland and Nebraska bills by the financial firm Ernst and Young noted that other states could follow.

In addition, the analysis said, the bills mimic similar actions taken by foreign governments, highlighted by the French tax on gross revenue from digital services enacted last year. Other nations to enact similar levies include Austria, Italy and Turkey. Their taxes take effect on various dates in 2020.

But the U.S. federal government is leery of the European taxes on American businesses. U.S. President Donald Trump and French President Emmanuel Macron made a deal last month to put the tax on hold in return for also suspending retaliatory tariffs on French merchandise imported to the United States.

The ground-breaking New York bill would impose a 5% tax on gross revenue from corporations that derive income from collecting and selling consumer data. Every time someone uses an internet service, companies collect data on the user, including names, birthdates, addresses, interests and even product preferences.

Assemblywoman Stacey Pheffer Amato, a Democrat and the bill’s sponsor, said in a phone interview that it’s not fair that consumers don’t benefit when their information is collected and sold to third parties by internet companies. A tax on that income, she said, would give the state revenue that could then be spent on programs to help state residents.

“My name is being shared, and they are making a profit off it,” she asked. “How do I share in that wealth?”

Amato said she introduced the bill, which has attracted no formal opposition, partly to start a discussion of the issue. “It might have unintended consequences — I’m open to hearing that.”

In Nebraska, state Sen. Tom Briese, a Republican, has introduced a bill that he expects will spark debate on the question, “What would our sales tax rate be if we taxed all services?” said Edward Boone, his chief of staff. “We would have an extremely low sales tax rate, like 1 or 2%.”

Nebraska’s sales tax rate is 5.5%, but it is assessed only on certain products and services — food, for example, is exempt. If the sales tax were expanded to encompass more goods and services, including internet companies’ ad revenue, the rate could be lowered and still raise the same amount of money.

Boone said when the legislature considers the bill at a hearing later this month, lawmakers will get a chance to “make a more informed decision on what are the services that we want to exempt from taxes.” He expects online services to be part of the discussion.

In a tactical move, the bill, if passed, would not take effect until 2021. “If it passed intact, the legislature could introduce a number of bills to exempt certain services, horse massages for example,” Boone said. “And they could make those decisions with information.”