His first stop was a Stamford Hill forum for Christian-Jewish relations, set up by Rabbi Hershel Gluck, Reb Chaim Hersh Stauber and Rabbi Avrohom Pinter. After initial introductions, Reverend William Taylor of St Thomas Church on Oldhill Street spoke very strongly in support of the Jewish community, saying that the attacks made by Ofsted on Jewish schools are an attack on all forms of religion. He asked Mr Hellewell to convey this message to the Prime Minister.

Mr Hellewell in turn spoke about the importance of faith, saying that the Prime Minister is committed to helping religious communities in various areas, including education. He promised that he would pass on the message from the forum.

Mr Hellewell then visited Machon Ohr Layeshorim/Children Ahead, the organization supporting children with learning difficulties, which is under the leadership of Harav Pinchos Weingarten and Reb Yidel Hartman. 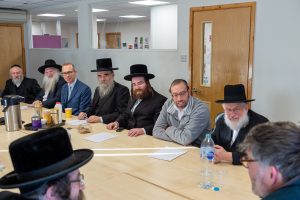 The next stop on the tour was the large Bobov Beis Hamedrash on Egerton Road, where Mr. Hellewell met with the gabba’ei beis hamedrash. He was greeted by Rabbi Avrohom Ost, Rabbi Yoel Yermiya Weiss, and Reb Zev Tzeizel. He was shown around the beis hamedrash, where the large plaque with the prayer for the welfare of the country is on prominent display, and listened to an explanation of how a kehillah operates and the role of a Rav and a Dayan. Mr. Hellewell was fascinated to see a sefer Mishnayos and to learn that many people come to the Kollel Erev each night after a long day at work, to learn the same Torah as their parents and grandparents – and generations back to Har Sinai.

In the Belz Beis Hamedrash, Mr. Hellewell was greeted by Rabbi Yidel Baumgarten, Rabbi Aharon Klein, Rabbi Gavriel Abelesz and Reb Moshe Patashnik. He was shown how the building replicated the pre-war beis hamedrash in Belz. He visited the cheder and was very impressed with the lessons going on, commenting on how happy the children looked. He then saw a wall display on which every child had written a compliment about another child, demonstrating how the pupils are taught to respect each other and to treat all people kindly.

Finally, a more formal meeting took place with the askanim of Chinuch UK, at which a number of educational issues were discussed.