World ‘Marginalizing Me Came at a Cost’ – Prof. Dariuz Stola Discusses the Polish Government’s Campaign to Dismiss Him From POLIN Museum
World 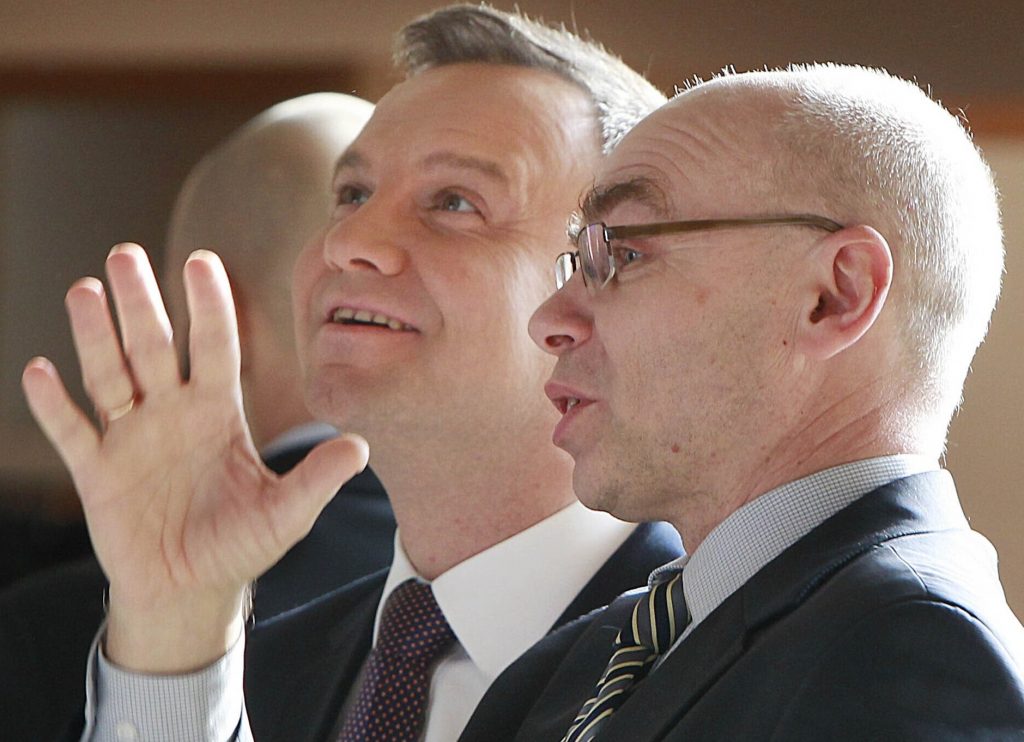 For over two years, the POLIN Museum of the History of Polish Jews has attracted wide media coverage, but not the type its founders had intended.

Against a backdrop of increasing efforts on the part of the national government’s ruling party to tighten the reins on historians and researchers, in 2018, its director, Dariuz Stola, became one of many independent-minded scholars targeted by some prominent leaders of the Law and Justice (PiS) party.

Despite strong support from museum staff and donors as well as by other scholars, when Professor Stola’s contract expired last year, Culture Minister Piotr Glinski refused to renew it. Last February, amid pressure from the city of Warsaw and the Association of the Jewish Historical Institute of Poland – who are co-equal partners in the museum together with the national government, Minister Glinski seemingly relented and allowed Prof. Stola to put his name forward as one of candidates to lead the museum for the next three years. Prof. Stola easily won the contest, but the government still failed to take any action.

Some had speculated that the appointment was being delayed until after parliamentary elections held this past October, fearing that naming someone seen as being at odds with its nationalist agenda would weaken PiS’s standing with its voter base. Yet, October came and went with significant success for the ruling party; still, no action was taken regarding the directory at POLIN.

Now, after a 12-month standoff – with the government’s statutory deadline of naming a director for POLIN fast approaching – Prof. Stola agreed to step aside and allow for the museum’s deputy director, Zygmunt Stępiński, to be named in his stead.

While he hopes that the move will allow the museum he has led since its opening in 2014 to free itself of political intrigue, his decision to resign, Prof. Stola says, was not reached under amicable circumstances.

“After many weeks of avoiding contact with the museum’s founders, the minister met with them and said openly that re-appointing me was out of the question. He said, ‘Give me any name but Stola’,” he told Hamodia. “The government is acting unlawfully, since they have an obligation to honor the winner of the competition, but this government regularly disregards our laws, including the constitution, and I felt there was a serious risk that they would appoint a completely unqualified candidate. Realizing my chances were zero, I said that I am ready to step aside if a compromise can be made.”

At a meeting held last Friday, the city of Warsaw and the Association reiterated their support for Prof. Stola, citing his past success at the museum and the government’s commitment to honor the results of the selection process. Yet, seeing that as impossible, they put forth Mr. Stępiński as their candidate of choice. Shortly afterwards, the Ministry of Culture relased a statement that they, too, would back Mr. Stepinski, who has served as acting director for the past year. Yet, the ministry also said that, before commiting to his installation, they were legally obligated to “consult trade unions operating at the Museum as well as professional and creative associations for an opinion on the candidate for director of the Polin Museum of the History of Polish Jews.”

Prof. Stola emphasized that his resignation, which was crafted in consultation with legal experts, was conditioned on the appointment of a candidate deemed acceptable to all three partners of the museum.

While it is widely expected that Mr. Stepinski will be installed in the coming week, Prof. Stola said that the government’s recent actions had given him reason for skepticism.

“If you would have asked me a year ago if [the Ministry of Culture] would go back on something like this, I would have said it’s impossible. But through this year, the Minister misled the museum’s partners and donors for months that he would eventually appoint me and then went back on it. He essentially admitted to doing this. So, until I see Minister Glinski’s signature on a paper appointing Stępiński, I cannot say that I trust him to keep his word about anything,” Prof. Stola said.

Minister Glinski is himself a scholar, having taught sociology at several Polish universities. More recently, he has developed a negative reputation with many of the country’s academics for what is seen as his role in stifling independent research that threatens his party’s nationalist narrative.

The public campaign against Prof. Stola by PiS and its supporters began in 2018, homing in on part of an exhibit on Poland’s anti-Zionist campaign of 1968. Its last section featured a room where anti-Semitic rhetoric of the time was displayed alongside similar statements made in present-day Poland, culled from media and internet — some of it attributed to ultra-nationalist politicians and pundits.

More recently, Minister Glinski claimed that Prof. Stola had “politicized” the museum and claimed he had refused to dedicate a conference in memory of former Polish President Lech Kaczyński, who was heavily involved in efforts to improve Polish-Jewish relations. Prof. Stola has publicly denied this claim, showing his emails from 2017 as evidence of his readiness to organize the conference.

Prof. Stola added that he felt much of the government’s criticism of his leadership at POLIN was rooted in his outspoken opposition to a controversial law that threatened fines and jail time for implicating Poland in the Holocaust genocide.

“All the reasons they raised are obviously false. Coincidentally, at the same time that I was criticized over the exhibit on 1968, I was criticizing the government over the Holocaust memory law. They said it was made to defend Poland’s honor, but it did greater damage to Poland’s image abroad than anything else in last years, and they themselves eventually had to step back from it,” he said. “A big part of the real reason for this whole matter is that the government does not like independent institutions and any limits on its power; this is part of a visible campaign to expand the government’s control.”

POLIN is hardly alone in what is widely seen as an attempt by PiS to squeeze museums and cultural institutions to tell a solely positive and nationalistic version of Polish history – especially relating to World War II, the Holocaust, and resistance to Soviet dominance. It was a story very much on display in the Culture Ministry’s actions regarding two museums in Gdansk, one about the war and another about the Solidarity Movement. Just last week, the director of the Silesian Museum was also dismissed. While government channels cited financial irregularities as the reason for the dismissal, museum experts stood in her defense, and many speculated that it was driven by similar political motives.

Prof. Stola added another, more underhanded, reason that he suspected was a contributing factor in the Culture Ministry’s particular dislike for him.

“In early 2018, the ministry demanded that I give up half of a 10-million-Euro grant that Norway had promised our museum for educational projects. I was called to the ministry, where they demanded that I give five million to the Museum of the Warsaw Ghetto, which at that point did not even exist,” he said. “I obviously refused. It was clearly against the interests of our museum and would compromise me in the eyes of our donors. The demand was so absurd that I inquired as to whether this request had actually originated with the minister himself. I never got an answer, but I know they were very angry about my refusal.”

Still a work in progress, the Warsaw Ghetto museum is a project that was initiated by Minister Glinski himself, in an effort to open an institution that would present a “Polish narrative” of resistance and other wartime topics.

After the agreement to back Mr. Stępiński’s candidacy was announced, the Association of the Jewish Historical Institute of Poland offered Prof. Stola to serve as its chief historian, a position that would still allow him to remain influential at POLIN. While he said that he would be “happy” to serve as an advisor, he was not ready to commit to any future plans.

“I never gave up my hope of returning to the museum and have not made any other plans yet,” he said. “Now I have to re-invent myself. I have gotten some offers from abroad as well, and have to weigh everything before making any final decisions.”

Prior to accepting the directorship at POLIN, Prof. Stola worked at the Institute of Political Studies at the Polish Academy of Sciences, and authored more than 10 books and more than 100 articles on the history of Polish-Jewish relations, the communist regime in Poland, and on international migrations in the 20th century. He was a Fulbright Scholar, and has been affiliated with several prominent academic and research institutions in Poland and internationally.

Despite his displeasure over the way in which events have unfolded, Prof. Stola voiced his support for Mr. Stępiński, with whom he has worked closely since 2014, and was confident that “he will not change POLIN’s narrative.”

Prof. Stola joined a chorus of museum supporters who expressed hope that Mr. Stępiński’s appointment would allow it to exit the political spotlight but did so with much caution.

“The museum is at a crucial point. I believe we can defend its independence, but it will take constant vigilance. Minister Glinski is happy to get rid of me now, and never criticized our core exhibit. Still, he and his party have a history of radicalization and what is acceptable for them today might not be in six months or a year from now,” he said. “I have been defeated, but it is only because the Minister was ready to break his word and act unlawfully. Still, marginalizing me came at a cost, as media in Poland and abroad have covered the story extensively; I also received many messages of support, some from highly respected and influential persons. It may be a message to him to act more carefully in the future.”