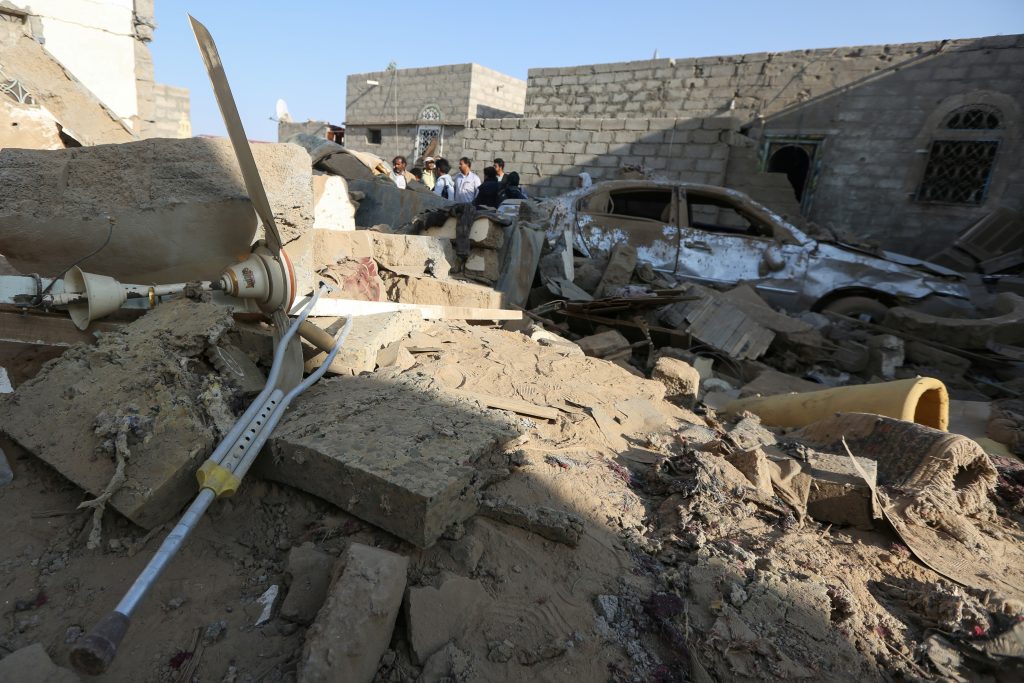 Airstrikes by a Saudi-led coalition fighting in Yemen killed more than 30 civilians in a mountainous northern province Saturday, the rebels said, and the U.N. humanitarian chief called the attack “shocking.”

The attack came hours after Yemeni rebels, known as Houthis, said they shot down a warplane of the Saudi-led coalition over the province of Jawf.

Saudi Arabia’s state-run news agency quoted Col. Turki al-Maliki, a spokesman for the coalition, as saying it was investigating “possible collateral damage” from a rescue operation in the area after the downing of the Tornado warplane.

Al-Maliki was quoted as saying the plane was providing air support for Yemeni government forces fighting the Houthis.

He did not say whether there were causalities or provide further details on the fate of the aircraft’s crew.

The U.N. humanitarian coordinator for Yemen, Lise Grnade, said the airstrikes in al-Maslub district killed at least 31 civilians and wounded 12 others, according to preliminary field reports.

“So many people are being killed in Yemen — it’s a tragedy and it’s unjustified. … Five years into this conflict and belligerents are still failing to uphold this responsibility,” she said. “It’s shocking.”

She said many wounded were taken to hospitals in Jawf and Yemen’s capital, Sanaa.

The humanitarian group Save the Children condemned the airstrike, saying it showed that the conflict in Yemen was “not slowing down.”

“This latest attack must be urgently and independently investigated, and perpetrators held to account,” said Xavier Joubert, the charity’s country director in Yemen.

He called for halting arms sales to the warring parties in Yemen’s conflict.

“Those who continue to sell arms to the warring parties must realize that by supplying weapons for this war, they contribute to making atrocities like today’s all too common,” Joubert said.

Saudi Arabia and the United Arab Emirates, the pillars of the U.S.-backed coalition, have purchased billions of dollars’ worth of weapons from Western countries, particularity the U.S.

The rebels released graphic images showing destroyed buildings and vehicles and bodies, claiming they were of the victims. They also released footage allegedly showing the downing of the Saudi aircraft and its wreckage.

The warplane crash and the airstrikes came amid heavy clashes between the government forces and Houthis in the provinces of Marib, Jawf and Sanaa. Hundreds of people, mostly fighters, were killed in the recent clashes that have also forced at least 4,700 families to flee, according to the U.N.

The Yemen conflict began with the 2014 takeover of the capital by the Houthis, who control much of the country’s north along the border with Saudi Arabia. The Saudi-led coalition of mostly Arab states intervened in March 2015 trying to restore the internationally recognized government of President Abed Rabbu Mansour Hadi to power.

In a relentless campaign, Saudi-led airstrikes have hit schools, hospitals and wedding parties and killed thousands of Yemeni civilians. The Houthis have used drones and missiles to attack Saudi Arabia.

The war has killed over 100,000 people, including fighters and civilians, according to the Armed Conflict Location & Event Data Project, which tracks violence reports in Yemen. The war also created the world’s worst humanitarian crisis, leaving millions suffering from food and medical shortages.