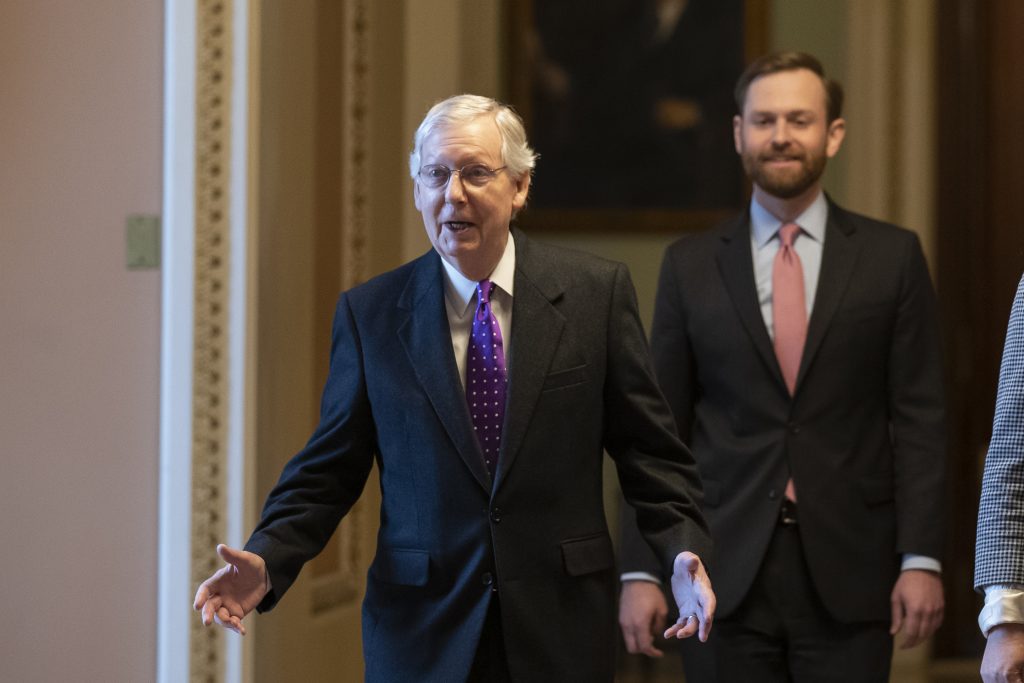 The Senate is so far cleaving neatly along party lines in advance of Wednesday’s virtually certain votes to acquit President Donald Trump on two impeachment charges, with just two or three undecided members even considering breaking with their party.

The chamber’s top Republican, Majority Leader Mitch McConnell of Kentucky, again slammed the impeachment drive of House Democrats as “the most rushed, least fair and least thorough” in history and confirmed that he will vote to acquit President Trump.

The trial is cruising to impeachment tallies that will fall short of even a majority of the GOP-held Senate, much less the two-thirds required to remove Trump from office and install Vice President Mike Pence.

McConnell said the two charges against Trump — that he abused his power and obstructed Congress’ ensuing investigation — are “constitutionally incoherent” and don’t “even approach a case for the first presidential removal in American history.”

The Kentucky Republican opened the Senate with a scathing assessment of the case presented by House Democrats, but he did not address whether Trump’s actions were inappropriate or wrong, as some Senate Republicans have conceded.

McConnell has dodged questions about whether Trump’s actions — pressuring Ukrainian President Volodymyr Zelenskiy to announce an investigation into Trump’s political rival Joe Biden — were inappropriate. He led an effort last week to deny Democrats any opportunity to call witnesses before the Senate, and he has worked closely with the Trump White House in shepherding the case through the Senate.

The final days of the trial have focused attention on a handful of senators in both parties who were viewed as potential votes to break with their party. GOP Sen. Lisa Murkowski of Alaska called the president’s actions “shameful and wrong” in a powerful speech late Monday, but she also derided the highly partisan process. “I cannot vote to convict,” she said, though she also sees blame within the Senate.

“We are part of the problem, as an institution that cannot see beyond the blind political polarization,” Murkowski told reporters after her speech.

Other Republicans, such as Sens. Lamar Alexander of Tennessee, Marco Rubio of Florida and Rob Portman of Ohio, also say Trump’s actions to withhold military aid from Ukraine while pressing Zelenskiy to announce an investigation into Biden and his son Hunter were inappropriate, but fell short of warranting his removal from office, especially in an election year.

Sen. Susan Collins, R-Maine, one of the very few remaining moderates in a chamber where partisanship has ground much routine business to a halt, is expected to announce her position later Tuesday.

West Virginia Sen. Joe Manchin, perhaps the only Democrat seen as a likely vote to acquit Trump, has floated the idea of censuring Trump instead, though the idea doesn’t seem to be gaining much traction. Sen. Doug Jones, a former federal prosecutor and Democrat seeking re-election in strongly pro-Trump Alabama, told reporters he’s likely to announce his vote Wednesday morning.

No member of either party has indicated yet that they will break with their party colleagues. Republicans hold a 53-47 majority in the Senate.

Top Senate Democrat Chuck Schumer of New York weighed in immediately after McConnell’s remarks, accusing the Republican leader and his GOP colleagues of sweeping Trump’s misconduct under the rug.

“The administration, its top people and Senate Republicans are all hiding the truth,” Schumer said. “The charges are extremely serious. To interfere in an election, to blackmail a foreign country, to interfere in our elections gets at the very core of what our democracy is about.”

The Senate is scheduled to vote on the two impeachment articles Wednesday afternoon. Trump is delivering his State of the Union address Tuesday night, a platform in which he appears before Nancy Pelosi, D-Calif., the powerful House speaker who orchestrated last year’s House impeachment drive.

Also Tuesday on the Senate floor, Sen. Rand Paul, R-Ky., repeated a question that Chief Justice John Roberts, who is presiding over the trial, refused to read last week. Roberts’ staff communicated to McConnell’s staff that he did not want to read the whistleblower’s name, according to a Republican familiar with the situation who wasn’t authorized to speak on the record.

Paul denies trying to out the whistleblower and notes his question didn’t use the word. He questions whether the whistleblower may have conspired with House staff aides in writing the August complaint that triggered impeachment.

Separately, Trump’s approval rating, which has generally languished in the mid- to low-40s, hit a new high of 49% in the latest Gallup polling, which was conducted as the Senate trial was drawing to a close. The poll found that 51% of the public views the Republican Party favorably, the first time the GOP’s number has exceeded 50% since 2005.