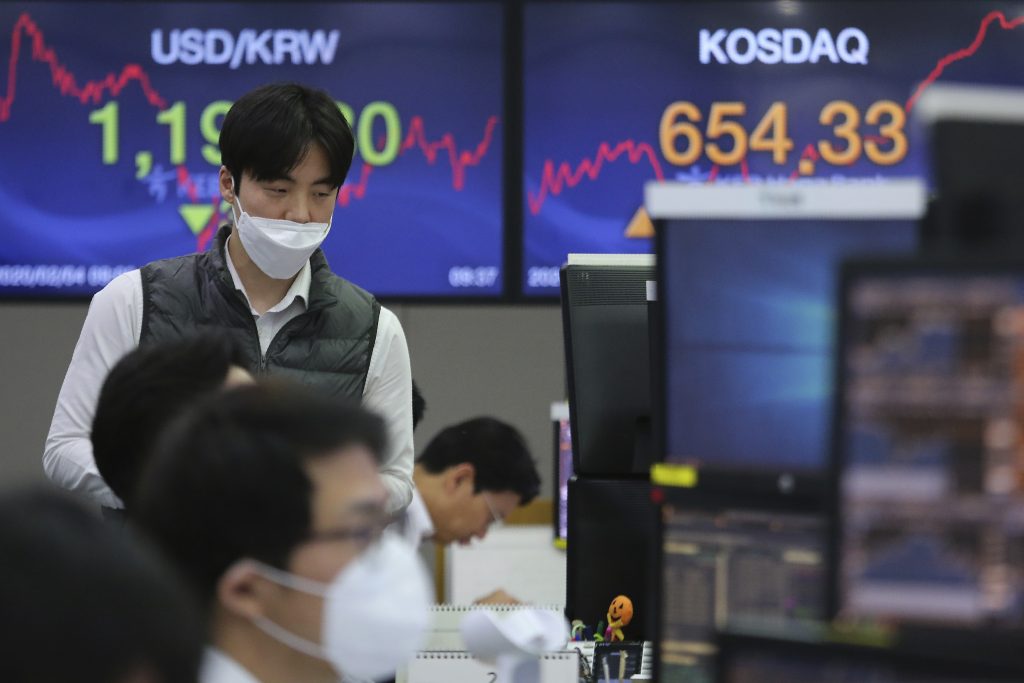 Shares are higher in Asia, with the Shanghai Composite up 1.3% as China’s central bank stepped up its intervention by channeling another 400 billion yuan ($57 billion) in extra funds into the market.

Markets were still far from giving the all-clear on the virus outbreak that has spread to more than 20 countries and killed more than 400 people. But calm returned after Monday’s 8% plunge in Shanghai, despite news that the number of people infected by the virus from China has risen to more than 20,000.

The Communist Party newspaper People’s Daily said in a tweet that a net 400 billion yuan in funds went into the markets following the People’s Bank of China’s injection of a net 150 billion yuan ($21 billion) on Monday. The central bank announced in advance that it would put 2 trillion yuan ($173 billion) into the market through reverse repurchases of securities on Monday when the markets reopened after a 10-day break that was prolonged to help reduce risks of further spreading the virus. The lion’s share of that money went to cover maturities falling due.

Chinese leader Xi Jinping has declared the crisis the country’s biggest priority, as tens of millions of people remain in lockdown as a precaution against contagion.

“The market is still, for the most part, in the fear mode, but as traders consume more economic data fallout, the hit to the real economy should become more apparent. Then the market will get steered by data, not opinions, or the herd mentality,” Stephen Innes of AxiCorp said in a commentary.

Markets have been wracked by uncertainty over how much the virus will spread, how many it might kills and how long the outbreak might persist, hurting economies and corporate profits.

Some major companies have closed factories in central China, airlines have canceled hundreds of flights and economists are cutting growth forecasts for the world’s second-largest economy.

The crisis struck just as investors believed economic growth would pick up thanks largely to interest-rate cuts and other bold actions by the Federal Reserve and other central banks around the world. A report on Monday said U.S. manufacturing returned to growth in January for the first time in six months, but many investors paid little attention because it doesn’t fully reflect all the virus concerns.

“Think about what global central bankers are thinking about now” said Emily Roland, cochief investment strategist at John Hancock Investment Management. She imagined them saying: “Are you kidding me? We pumped so much liquidity into the economy last year, and now the yield curve is inverting again?”

The yield curve is a tool used by investors that sits in the dusty corners of the bond market. Markets don’t pay it much attention until it becomes inverted, a relatively rare occurrence that happens when short-term Treasuries offer higher yields than longer-term Treasuries. An albeit imperfect rule of thumb says a recession may be a year or so away when the three-month Treasuries’ yield is higher than 10-year Treasuries’.

“Sentiment builds on sentiment, and there’s so much uncertainty right now,” Roland said. “We’re not ready to call the all-clear until we see a sustained re-acceleration not only in earnings estimates but also in the economic data.”

In the U.S. stock market, gains were relatively widespread on Monday with two stocks rising for every one falling. But nearly a quarter of the gain for the S&P 500 came from just two stocks: Microsoft and Google’s parent company, Alphabet.

These two, along with other tech behemoths, have increasingly been driving the market as the top five stocks in the S&P 500 account for roughly 18% of the index by market value. Alphabet will report its latest quarterly reports after markets close on Monday, while Microsoft reported much stronger-than-expected earnings last week.

Nike jumped 3.9% to help drive Dow Jones Industrial Average higher as investors continue to try to handicap how much its earnings will be hurt by the virus. It had dropped more than the rest of the market in earlier weeks because it depends on China not only to help make its shoes and athletic products but also to buy them. Nearly 18% of its revenue last quarter came from China.

Benchmark U.S. crude gained 52 cents to $50.63 per barrel in electronic trading on the New York Mercantile Exchange. It tumbled $1.45, or 2.8%, on Monday to settle at $50.11 per barrel on worries about demand. It had been above $63 toward the start of the year, before the virus outbreak.