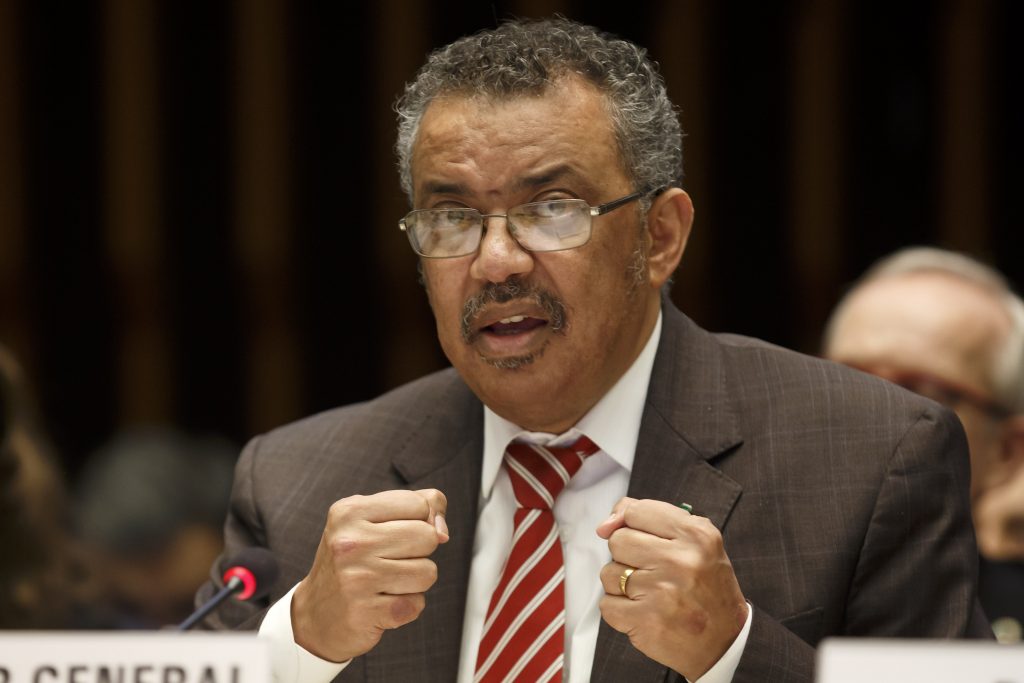 The World Health Organization chief has traveled a dozen times to monitor the Ebola response in violence-marred eastern Congo. But when he planned to visit China’s capital last week over a new viral outbreak emerging from central Hubei province, his daughter got worried.

“Before I left for Beijing, my daughter was saying, ‘Oh, you should not go,’” WHO Director-General Tedros Adhanom Ghebreyesus confided to the U.N. health agency’s executive board in a public session on Monday.

The account exemplifies the fine line WHO officials are navigating between fear about the new coronavirus and hopes of increasing international preparedness about an outbreak that has taken more than 360 lives and infected at least 17,238 people in China since late December — and could become a pandemic. So far, growth has been exponential in China, but elsewhere cases remain under 150, scattered across nearly two dozen countries.

“Instead of spending time on fear and panic, we should say this is the time to prepare,” Tedros said. “Because 146 cases, by any standard, is very low.”

As governments clamp down on travel to China, airlines suspend flights and Chinese nationals fret about rising xenophobia and ostracism, WHO is calibrating a message of praise to Chinese officials and trying to focus on the epicenter — Wuhan city and surrounding Hubei province — to keep the virus from spiraling out of control. It also wants to help get weaker health systems ready.

Before he left for the meeting with President Xi Jinping last week, Tedros reassured his daughter: “It’s ok, it’s not all over China.”

“Even in China, the virus is not evenly spread everywhere, and the risk is not the same,” he recalled. “When I was in Beijing, what we had discussed with the authorities is that our concentrated effort should be in the epicenters, or the sources of the virus.”

Pausing on a couple of occasions to cough, clear his throat, and drink some water, Tedros quipped: “Don’t worry: It’s not corona,” prompting laughter.

WHO is also battling misinformation, working with Google to ensure that people get facts from the U.N. health agency first when they search for information about the virus. Social media platforms have also taken steps to limit the spread of misinformation and rumors about the outbreak.

Chinese officials are increasingly speaking out. At the executive board meeting, Ambassador Li Song, deputy permanent representative for China in Geneva, lashed out at flight cancellations, visa denials and refusals by some countries to admit citizens of Hubei province — saying those moves went against WHO recommendations.

Li noted how President Xi, in his meeting with Tedros, had said the coronavirus epidemic “is a devil — we cannot let the devil hide.”

“At the same time, the international community needs to treat the new virus objectively, fairly, calmly, and rationally, and not overinterpret it negatively and pessimistically, or deliberately create panic,” Li said.

“We need facts, not fear. We need science, not rumors. We need solidarity, not stigma.”

Since the outbreak began, a number of misleading claims and hoaxes about the virus have circulated online. They include false conspiracy theories that the virus was created in a lab and that vaccines have already been manufactured, exaggerations about the number of sick and dead, and claims about bogus cures.

On Sunday, WHO lamented that the outbreak and response have been accompanied “by a massive ‘infodemic’ — an overabundance of information, some accurate and some not — that makes it hard for people to find trustworthy sources and reliable guidance when they need it.

The report said WHO, the U.N. health agency, was working “24 hours a day to identify the most prevalent rumors that can potentially harm the public’s health, such as false prevention measures or cures.”

Tedros also addressed his decision last week to classify the virus outbreak as a global emergency, saying the move was prompted by increased human-to-human spread of the virus to numerous countries and the fear it could have a significant impact on developing countries with weaker health systems.

Tedros said recent outbreaks such as the new virus and Ebola demonstrated the shortcomings of the “binary” emergency system, calling it “too restrictive, too simplistic, and not fit for purpose.”

“We have a green light, a red light, and nothing in-between,” he said, adding that WHO was considering options to allow for an “intermediate level of alert.”

In July, Tedros declared the Ebola outbreak in Congo a global emergency: There have been 3,421 cases and 2,242 deaths from it since the outbreak began 18 months ago.

The WHO executive board, which is starting a six-day meeting, plans to hold a special technical session on the virus Tuesday.