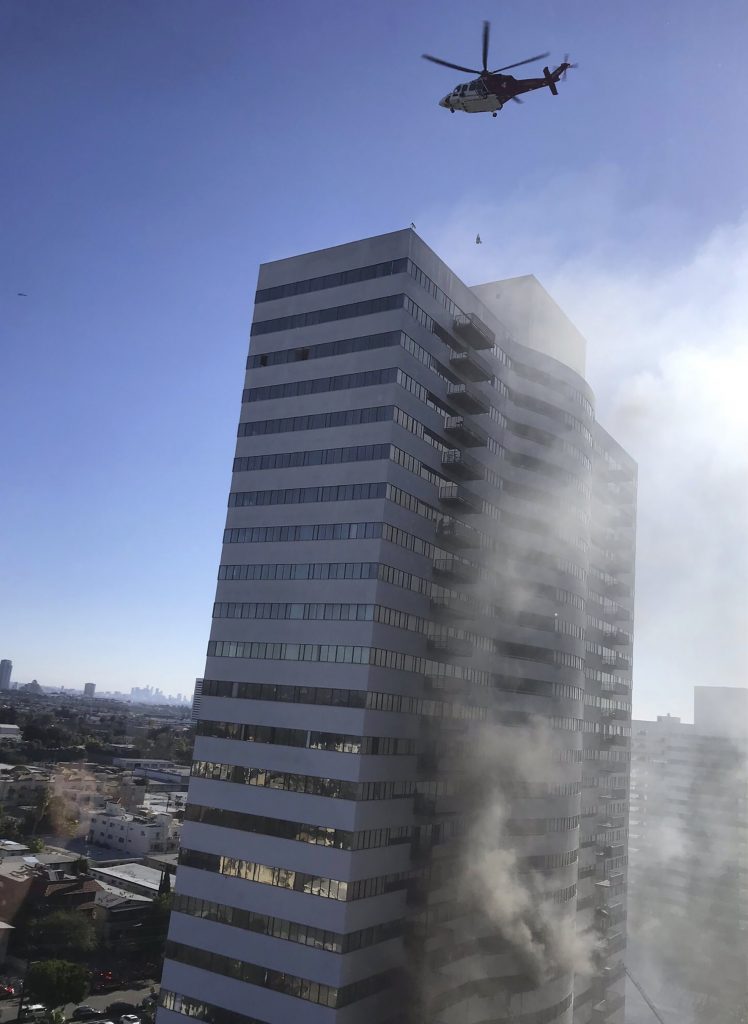 Los Angeles firefighters rescued terrified residents from the rooftop of a 25-story high-rise apartment building where a fire broke out on a sixth-floor balcony and sent choking smoke billowing through the upper levels. One person was critically injured, authorities said.

Officials said early reports that some people may have jumped were not true. A helicopter crew member on the roof helped attach each person to line and they were hoisted into the hovering chopper one by one. At one point firefighters lifted a small white dog into the helicopter.

Deputy Fire Chief Armando Hogan said the fire was put out shortly before 10 a.m., about 90 minutes after firefighters responded. Two people were taken to hospitals and six others had smoke inhalation, he said.

Hogan said the cause of the fire is under investigation, with firefighters looking into the possibility it was deliberately set. “Arson is on the scene doing an investigation,” he said.

There were early reports that some people had jumped from the building after flames began raging through the sixth floor, but Hogan said that wasn’t true.

He said one man was hanging onto the edge of the building contemplating jumping when firefighters managed to reach him and talk him out of it, then pull him to safety.

With the flames doused, firefighters were going through the building’s 25 floors to check on occupants. “Right now we’re doing a floor-to-floor search to make sure people are OK,” Hogan said.

A fire also broke out at the Barrington Plaza high-rise in 2013, injuring several people and displacing more than 100, the Los Angeles Time reported.

Fire officials said then that the building was not equipped with a sprinkler system, the newspaper reported. It was built in 1961 and wasn’t required to have one under state regulations saying buildings taller than 75 feet include such fire-suppression systems unless granted an exemption.