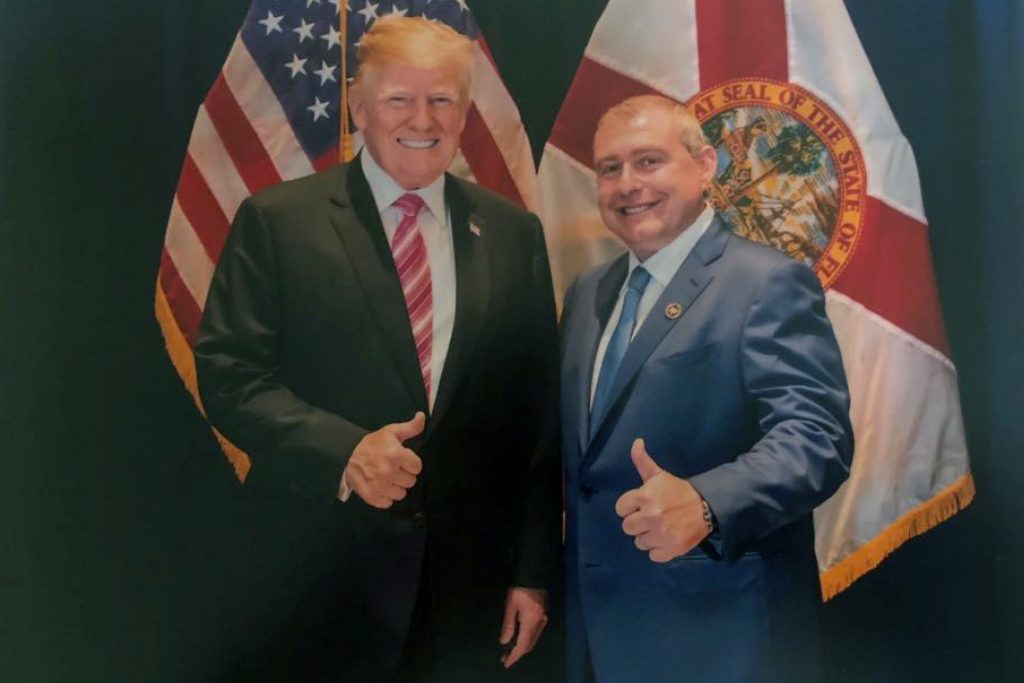 President Donald Trump was recorded during a private meeting in April 2018 saying that the U.S. should “get rid of” then-U.S. ambassador to Ukraine Marie Yovanovitch, according to a video provided by an attorney for Lev Parnas, an associate of the president’s personal lawyer Rudy Giuliani.

The iPhone video, which is more than an hour long, shows President Trump walking into a room with a number of other people, before the camera pivots to the ceiling while the group has a meal.

At one point, an unidentified accented voice tells Trump, “We gotta get rid of the ambassador; she’s still left over from the Clinton administration.” The person adds, “She’s basically walking around telling everyone, wait, he’s going to get impeached.”

Trump responds, “Get rid of her. Get her out tomorrow. I don’t care. Take her out. OK? Do it.”

The conversation was reported Friday by ABC News, which said it was made during an April 30, 2018, dinner at the Trump International Hotel in Washington that included Parnas and Igor Fruman — business associates of Trump’s personal lawyer Giuliani — who later were indicted in New York on campaign-finance charges. Trump has denied knowing Parnas and Fruman.

At another point in the conversation, Trump asks about Ukrainian oil reserves.

“Ukraine has oil? Ukraine? How come they don’t have any money?” he asks.

An unidentified person chimes in later, “They’re waiting for your support a little bit because if they do it, Russia will cut off a lot of their revenue.”

“How long will they last in a fight with Russia?” Trump asks.

Joseph Bondy, Parnas’s lawyer, said he turned the video recording over to House Democrats after the ABC News report.

“Lev went back through his account today and found it. I then conveyed it,” Bondy said Friday.

House Intelligence Chairman Adam Schiff declined to discuss the recording in detail on Friday when asked about it.

“I don’t have enough background, really, to give you a response to it at this time,” Schiff told reporters. “But plainly, if the president at the urging of Giuliani, or Parnas, or Fruman, if this is additional evidence of his involvement in that effort to smear her, it would certainly corroborate much of what we’ve heard.”

Schiff added, “But I’m not in a position yet to analyze that, not having looked at it.”

The video also offers some of Trump’s musings on politics, including his belief that Barack Obama — in his bid for a second White House term — would have been easier to beat than Hillary Clinton in 2016.

“Obama would have been much easier, second term. Romney should have never lost,” he is heard saying, referring to 2012 GOP nominee Mitt Romney.

Asked directly if he meant easier than Clinton, Trump responds: “I think so.”

But Trump later says had Clinton picked primary rival Bernie Sanders for vice president, “she would have been much tougher.” She picked Virginia Senator Tim Kaine as her running mate instead.

Trump says he ended up getting 20% of the Bernie vote “because of trade.”

Trump says Sanders is “a big trade guy” whose views are similar to Trump’s in believing other countries take advantage of America in trade. “And he’s right,” said Trump. “He was the only one I didn’t want her to pick.”