It was a structure that represented dreams and aspirations.

The dreams of its founders and the aspirations of its young students.

Bnos Devorah Raizel is the beloved Bais Yaakov of the Fallsburg Yeshiva community. Named after Mrs. Devorah Raizel (Debbie) Shick a”h bas Reb Avrohom Yosef and Pessia Frankel, the school is a home away from home for its many students, who have benefited from the chinuch b’derech Yisroel saba.

Bnos Devorah Raizel began in a small house left from the original Laurel Park Hotel and grew from classes of four students to classes of 25 and now close to 200 girls.

Bnos Devorah Raizel Elementary School had long grown out of its temporary facilities on Reb Chiya Way on the campus of Yeshiva Gedolah Zichron Moshe of Fallsburg when golden shovels pierced the parched ground of an overgrown lot in Fallsburg, NY, at the groundbreaking of its brand new school building two years ago. Located on Laurel Park Road, across the street from the school’s current trailers and bungalows, the building was going to house the almost 200 students of Bnos Devorah Raizel comfortably, with room for further growth. Completion of the building was drawing close, with a date for a chanukas habayis already finalized.

And then the unthinkable happened.

On the morning of Thursday, January 23, the dreams of a new building went up in smoke – very literally. A massive blaze broke out at the construction site of Bnos Devorah Raizel’s building, completely destroying the structure, leaving behind nothing more than a pile of rubble.

The blaze became apparent at around eight o’clock this morning when residents of the close-knit community saw flames and billowing smoke rising from the roof and windows. Once it was extinguished, very little remained of the structure that was slated for use in the coming months.

The suspected cause is a propane tank that exploded while left at the construction site.

It was a scene that was hard to watch for the South Fallsburg stalwarts who had invested heart and soul into making the dream of a new building into a reality.

Parents and young students had been excited for the building’s imminent completion and the fire casts both disappointment and unknown future on the project.

Students were heartbroken, teachers left speechless. What was there to say?

The school – their school – had just burned to the ground.

But Klal Yisroel doesn’t stay down for long. Within hours of the devastating fire, local residents were joined by others in launching a campaign to restore what was lost. The school would bounce back with the help of compassionate Yidden nationwide and beyond.

In a poignant letter, Rav Elya Ber Wachtfogel, rosh yeshiva of Yeshiva Gedolah of South Fallsburg, pleads with Yidden, wherever they may be, to step up and participate in assisting the school recoup its losses. The fire is nothing short of devastating, and Rav Wachtfogel stresses that it is “virtually impossible” for the school to continue operating in its current state without the new building.

While the school does have insurance, it will not come close to covering the expenses of constructing this building. It is absolutely vital that the needed funds be raised in order to rebuild the building, ensuring the continuance of chinuch between the walls of Bnos Devorah Raizel.

The school has established a goal of raising $500,000 in order to ensure the construction of a building for Bnos Devorah Raizel l’sheim ul’tiferes.

To participate in this emergency campaign, please go to: https://www.rayze.it/rebuildfallsburg/ 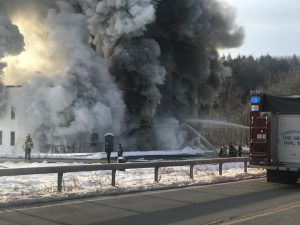