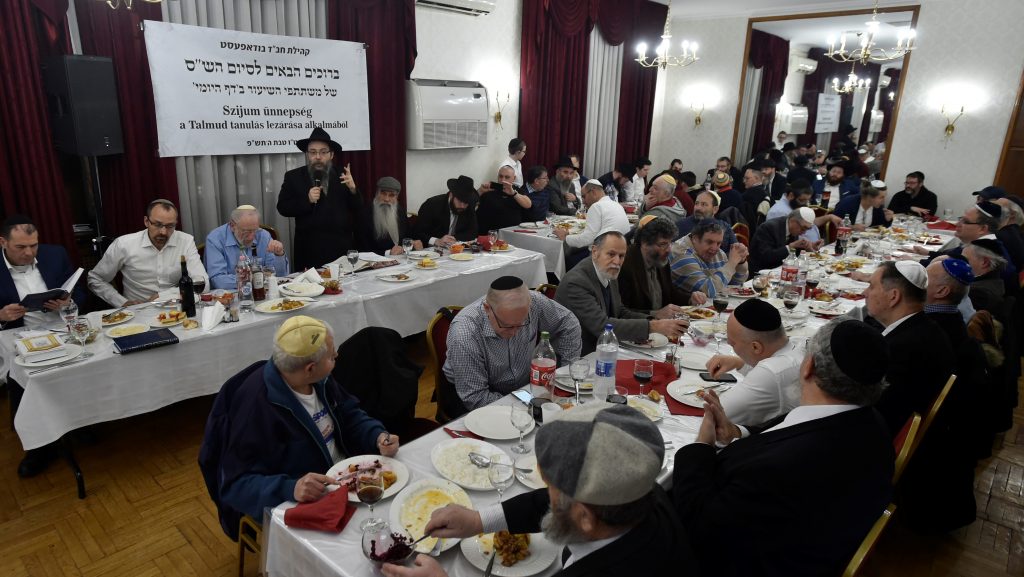 Last week Sunday the Chabad community celebrated the Siyum HaShas, learned every morning at the Shas Chevra Lubavitch shul. In honor of the Torah and its scholars, a large crowd, about 100 people, gathered and rejoiced together in the simchah of the Torah.

In his hadran, the Maggid Shiur, Harav Boruch Oberlander – Chabad shliach, who serves as Av Beis Din of the city’s Kehillos Hachareidim – also told about the studying in the past of Daf HaYomi in Budapest during the second cycle, 5691-5698 (1931-1938).

Among other places, there were great shiurim in the Shas Chevrah shul and also at the famous Chassidic Polisher Shul on Kiraly Street (where the Divrei Chaim of Tzanz prayed when he was in town). When they celebarated the Siyum in 1938, Rabbi Yosef Grossberg declared, “It is not only the simchah of Lublin but also the joy of Hungarian Jewry, which is the joy of all the Jewish people!”

Daf HaYomi lessons continued in Hungary until the Holocaust in 1944, when a large part of the learners perished al kiddush Hashem, Hy”d.

To our delight in the 13th cycle, Hungary returned to take its place alongside the rest of the Jewish communities, and the voice of the Torah was heard in this country once more. In Budapest they learned daily Daf HaYomi until the present Siyum; with this the Chabad community returned the glory to its old place.

A new Daf Yomi shiur was announced in the Obuda shul for Hungarian speakers. The Maggid Shiur is Rabbi Shlomo Koves, who is the Rav of the shul, which about 40 people attend daily.

Each participant in the daily Daf Yomi class said a dvar Torah in thanksgiving to Hashem, that they where zoche to be students of the beit midrash, and that they finished all the Talmud Bavli. In praying for the future, they asked for siyatta diShmaya that they should be able to study and finish the next cycle as well.