Mispallelim Sunday morning found that the mezuzah on the entrance foyer of the building of the kever of Shmuel Hanavi was burned, and the remains of the mezuzah had also been vandalized.

As soon as the incident was discovered, police forces found the remains of the burnt mezuzah in the nearby garbage can. These remains will be buried giving them proper kavod. At the same time, several suspects, Arab residents of the area, have been identified.

Rabbi Shmuel Rabinowitz, Rav of the Kosel and Mekomos Hakedoshim, said that “the law must be fully enforced with those rioters who sought to disgrace this holy site. 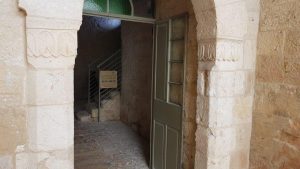 “In these days, in which we mark the triumph of the Jewish people over the Greeks who sought to undermine the kedushah of the nation, we must not stand in the face of wrongdoing, harming religious objects, violence and corruption of rioters and inciters against the Jewish people and holy places. ”

On Monday, a new mezuzah was set in place by Rabbi Rabinowitz.

Many thousands visited the site of the kever of Shmuel Hanavi during the days of Chanukah and especially on Zos Chanukah, a day known as a yom tefillah. 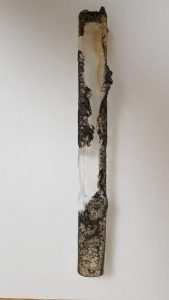