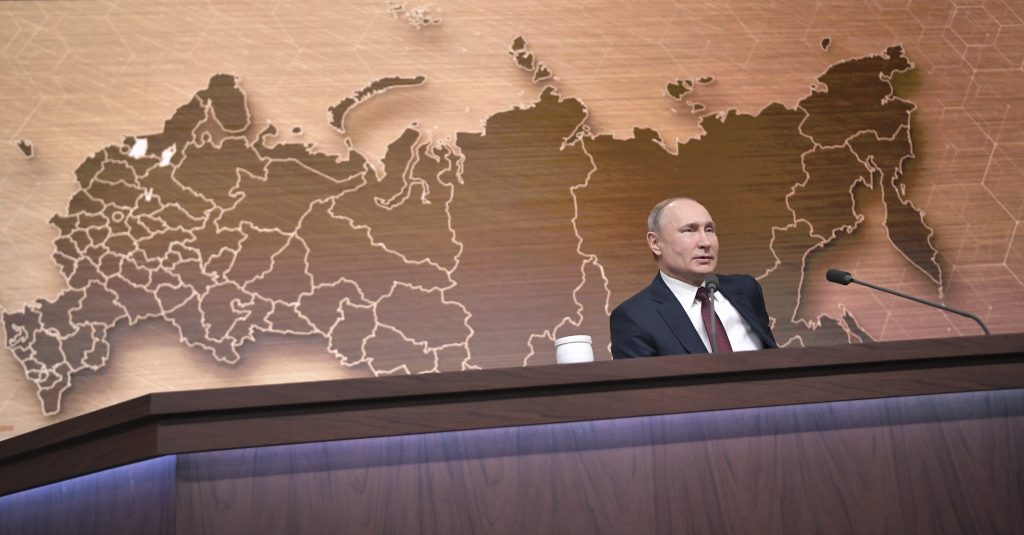 Putin said Thursday at his annual news conference in Moscow that the move is a continuation of the Democrats’ fight against Trump.

“The party that lost the [2016] election, the Democratic Party, is trying to achieve results by other means,” Putin said.

He likened Trump’s impeachment to the earlier U.S. probe into collusion with Russia, which Putin downplayed as being groundless.

Putin noted that the impeachment motion “is yet to pass the Senate where the Republicans have a majority.” He added that “they will be unlikely to remove a representative of their own party from office on what seems to me an absolutely far-fetched reason.”

Trump was impeached by the House of Representatives, becoming only the third American chief executive to be formally charged under the Constitution’s ultimate remedy for high crimes and misdemeanors.

The historic vote split along party lines Wednesday night in the U.S., much the way it has divided the nation, over a charge that the 45th president abused the power of his office by enlisting a foreign government to investigate a political rival ahead of the 2020 election.

The House then approved a second charge, that he obstructed Congress in its investigation. The articles of impeachment, the political equivalent of an indictment, now go to the Senate for trial.

The Russian leader added that climate changes could trigger fires, devastating floods and other negative consequences.

Putin emphasized that Russia has abided by the Paris agreement intended to slow down global warming. At the same time, he noted that factors behind global climate change have remained unknown and hard to predict.

Putin, who has been in power for two decades, also hailed the economic achievements of his rule. He emphasized that Russia has become the world’s largest grain exporter, surpassing the U.S. and Canada — a dramatic change compared to the Soviet Union that heavily depended on grain imports.

The Russian leader also pointed at industrial modernization, saying that three quarters of industrial equipment is no older than 12 years.

He said that the country has built three new airports, 12 new railway stations and the number of major highways has doubled.

The Russian economy had suffered the double blow of a drop in global oil prices and Western sanctions that followed Moscow’s 2014 annexation of Crimea. It has seen a slow recovery since 2017 after a two-year stagnation.

Russia’s ties with the West have remained at post-Cold War lows, and Western penalties have continued to stymie the country’s economic growth.

Putin voiced hope for further moves to settle the conflict in eastern Ukraine following his talks in Paris on Dec. 9 with the leaders of Ukraine, France and Germany.

He said that the 2015 peace agreement signed in Minsk and brokered by France and Germany must be observed, rejecting Ukrainian President Volodymyr Zelenskiy’s push for revising it.

The fighting in eastern Ukraine that flared up in 2014 after Russia’s annexation of Crimea has killed more than 14,000 and ravaged Ukraine’s eastern industrial heartland.

The Minsk deal envisaged that Ukraine can regain control over the border with Russia in the separatist-held regions only after they are granted broad self-rule and hold local elections. The agreement was a diplomatic coup for Russia, ensuring that the rebel regions get a broad authority and resources to survive on their own without cross-border support.

Zelenskiy pushed for tweaking the timeline laid out in the accord so that Ukraine gets control of its border first before local elections are held, but Putin firmly rejected that.

Putin, who once lamented the breakup of the Soviet Union as the greatest geopolitical catastrophe of the 20th century, had some harsh words to say about Soviet founder Vladimir Lenin.

He lambasted Lenin’s policies on ethnic issues, saying that his idea to grant broad autonomy to ethnic-based Soviet republics, including their right to secede, paved the way for the Soviet breakup once the Communist Party’s hold on power started to loosen.

At the same time, Putin rejected the push for taking Lenin’s embalmed body out of the Red Square tomb and burying it, saying that it would offend older people who still see the Soviet founder as a powerful symbol.

He noted that the Soviet demise spawned expectations of a “unipolar world” in which the U.S. dictates terms to others, adding that such “illusions” quickly collapsed. Putin said that China has come to challenge the U.S. as the global economic powerhouse and hailed increasingly close ties between Moscow and Beijing.