National Impeachment Hits House Floor: What to Look at in Historic Vote
National 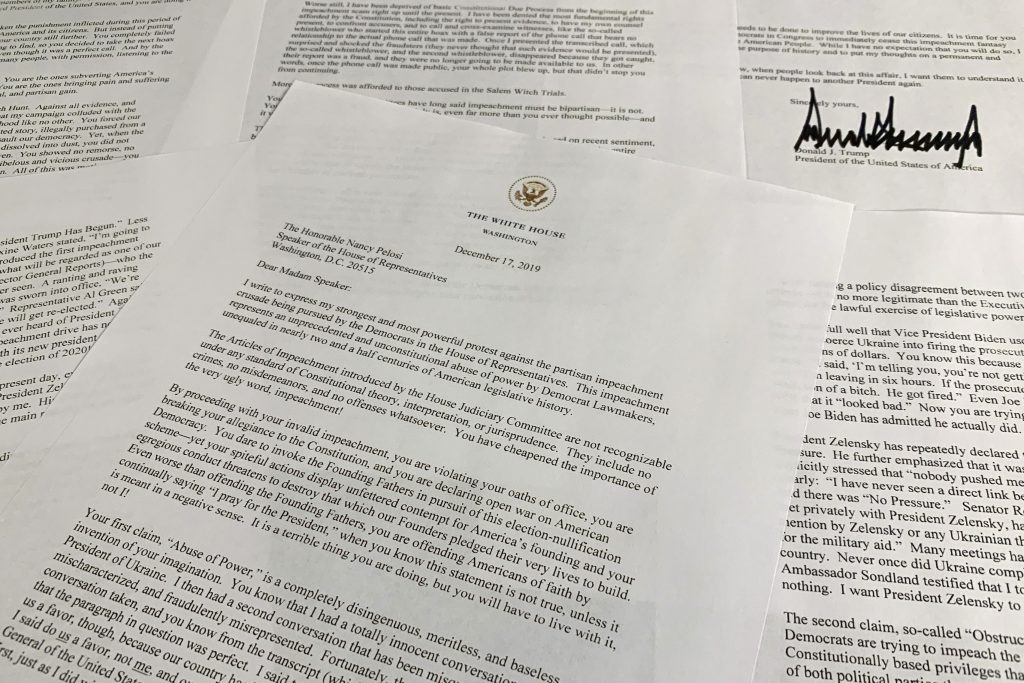 American history is happening on the House floor.

Democrats are driving President Donald Trump to the brink of impeachment Wednesday when they bring abuse and obstruction charges against him to a full House vote. That could take place early Wednesday evening, making the 45th president only the third commander in chief to face that penalty.

But first, watch for a daylong showdown that’s been boiling for years between Republicans loyal to Trump and Democrats who say his conduct toward Ukraine makes him unfit for office. Look, too, for legacy moments for Washington’s political veterans on the eve of the 2020 election year.

What to watch during a historic day on Capitol Hill that begins at 9 a.m. and is expected to end with a final vote between 6:30 and 7:30 p.m.:

Trump is heading for impeachment. When the House opens debate, the outcome will have been known for some time.

A tally compiled by The Associated Press found that a majority of House members have said they will vote to approve the charges and send them to the Senate for a trial next month.

The GOP-led Senate is not expected to convict and remove Trump from office.

Expect most Democrats to vote for impeachment, and all Republicans to vote against it.

But there are exceptions.

One freshman Democrat, Jeff Van Drew of New Jersey, has indicated he will oppose impeachment, then switch parties to become a Republican. Earlier this year, Michigan conservative Rep. Justin Amash left the GOP when he favored impeachment. He is expected to vote yes to impeach.

One new Democratic congressman, Jared Golden of Maine, said he would vote to impeach on abuse of power but not obstruction.

Expect the House to take the nation’s us-vs-them political culture out for a spin before a global audience. But it’s not clear the proceedings are changing many minds.

Trump’s approval ratings have held steady since a whistleblower report and a partial transcript revealed he had pressured Ukraine’s president to investigate Democrats.

Wide shares of Democrats both disapprove of the president and support impeachment, while wide shares of Republicans approve of Trump and want him to remain in office.

New polls from The Washington Post/ABC News and CNN find support for impeachment and removal remains at about half of Americans.

Impeachment will subject Trump to what former Presidents Gerald Ford and Jimmy Carter called a “profound disgrace” that stains a president’s legacy forever. Only two presidents have been impeached: Andrew Johnson in 1868 and Bill Clinton in 1998.

Richard Nixon chose to resign instead.

Trump has mocked the articles of impeachment as weak.

He’s heading to Michigan, the Democratic state he flipped in 2016. Vice President Mike Pence is on a bus tour across the state and expected to join Trump at the rally in Battle Creek.

On the eve of the floor action, Trump gave a nearly six-page preview of his approach in a rambling letter to House Speaker Nancy Pelosi, in which he cast himself as a victim and accused the Democrats of smarting over their election losses. “You are the ones bringing pain and suffering to our Republic for your own selfish, personal, political and partisan gain.”

It’s legacy time for her, too.

She refused to launch impeachment proceedings against Trump over his obstruction of the Russia investigation, saying she’d be against doing so unless there was bipartisan sentiment for it.

That still doesn’t exist for the impeachment articles now headed for passage. But Pelosi has said Trump’s conduct toward Ukraine, while holding up military aid to that country, left her no choice.

“Very sadly, the facts have made clear that the President abused his power for his own personal, political benefit and that he obstructed Congress,” Pelosi wrote to colleagues. “In America, no one is above the law.”

After votes on each of the two amendments, the House is expected to authorize Pelosi to name a team of prosecutors for the Senate trial. Lobbying for the jobs is well underway. The wagering begins with the two lead House impeachment chairmen, Adam Schiff of Intelligence and Jerrold Nadler of Judiciary, playing roles.

The trial is expected to begin in January, with Chief Justice John Roberts presiding.

Senate Majority Leader Mitch McConnell and Minority Leader Chuck Schumer have begun negotiating, and sniping, over how the trial will be conducted.

McConnell set the partisan tone by declaring that he’s “not an impartial juror.”