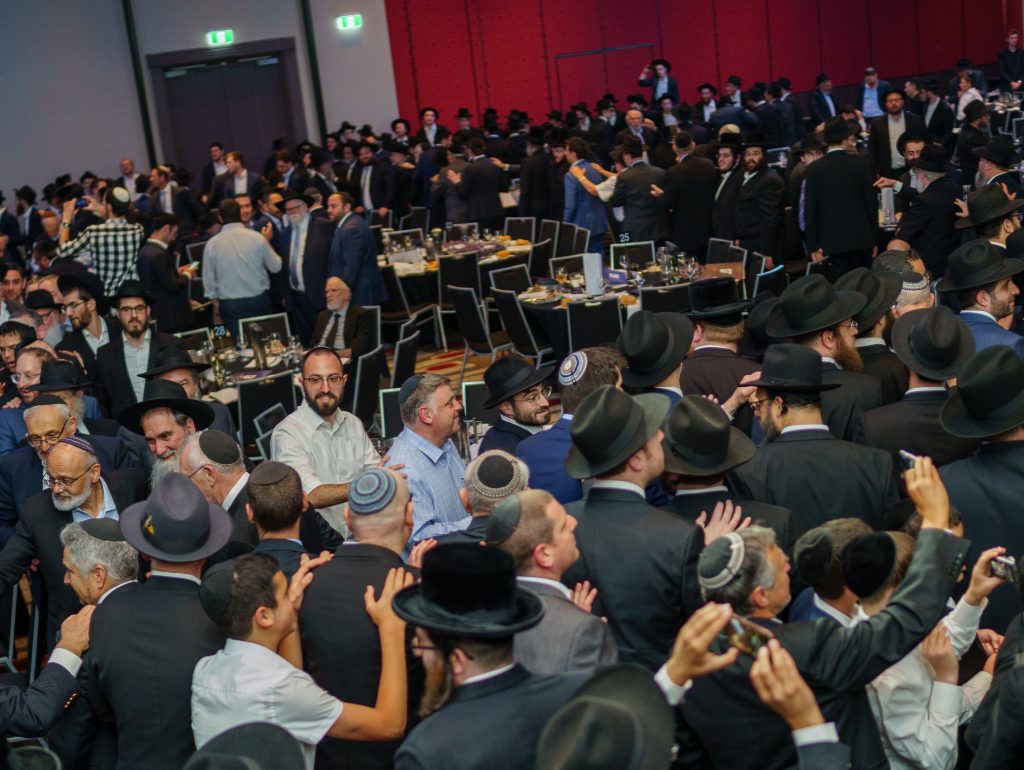 Monday night marked a historic Siyum HaShas in Melbourne. Well over 1,000 people attended at Pullman Albert Park to celebrate the 13th cycle of completing Shas in the Daf Yomi format.

While the winter weather has been a consideration for Siyum organizers in the Northern Hemisphere, the Siyum in Melbourne was held over two weeks before the end of the cycle due to the local summer vacation, when people will be away.

Many of Melbourne’s Rabbanim were in attendance, and members of all sections of the Melbourne kehillah participated. After the hadran the entire room vibrated with the sound of singing and dancing. The participants showcased Melbourne’s unique, close-knit community, dancing together in unity for the honor of Torah.

Over 150 lomdei Daf Yomi in Melbourne stayed the course and reached the milestone of completing Shas. The men danced, the women danced; all getting caught up in the simchas haTorah.

Thanks to Family Weiszberger, Shlomo Gertner came to Melbourne and sang at the Siyum HaShas. His melodious voice captivated the audience.

The master of ceremonies for the evening was long-time Maggid Shiur of Yeshivah, Rav Mottel Krasnjanski. The event began with Rabbi Phillip Heilbraun and Rav Aryeh Berlin (both having completed Shas) reciting Tehillim for the refuah of the sick in the community.

Long-time Daf Yomi Maggid Shiur Rav Yoel Friedman of Adass Israel publicly finished maseches Niddah, concluding with the hadran and Kaddish. Mr Friedman emphasized that it is not enough to learn Shas once; there needs to be repetition. “The Gemara doesn’t say, “kol halomed halachos, he who learns Halachah,” it says rather,  “kol hashanah, he who revises,” which means one has to keep going over and over [his learning].”

The pesichas haShas, the beginning of the 14th cycle of Daf Hayomi was delivered by Harav Shlomo Kohn, Rav of Adass Israel.

Lenny Faraday recounted during the evening how he gained inspiration from the speakers at the 12th Siyum Hashas in 2012.

He said “I started to think, what if I started? Could I do it? It would be an amazing journey to embark on but I was 49 years of age having never completed a masechta of Gemara. I got to bed that night around 1.30 a.m. and set my alarm for around 4.45 a.m. I knew of a Daf Yomi shiur starting at around 5.30 a.m. My alarm went off and I remember to this day the thoughts that were going through my head.

“The yetzer hara of tiredness was palpable. I knew that if I sat up and got out of bed that morning I would begin, but if I lay back down to sleep I would not get up and begin Daf Yomi and the inspiration would go up in a puff of smoke. Baruch Hashem I got up and as a result, I stand here tonight seven and a half years down the track along with many people in this room tonight and thousands of Jews worldwide.”

Yonatan Rubinstein, a 26-year-old graduate of Leibler Yavneh College, gave an account of his journey to completing Shas.

“Every day is a new step, a new daf and it is only one step that is required every day until one reaches the peak.” He was inspired by his father, Mr. Philip Rubinstein, who was completing Shas and come what may, carried on learning the daf.”

Rabbi Yosi Fromer, chairman of the Melbourne Daf Yomi Committee, thanked two significant sponsors for the evening, Mrs. F. Spigelman and Mr. Rafi Lamm. Rabbi Fromer praised them for enabling the community to celebrate the completion of Shas in grand style. In turn Rabbi Yossi Fromer was presented with a specially minted gold Daf Yomi coin for having organized the event.

Rabbi Ephraim Shapiro of Miami Beach, Florida, delivered the keynote address. He gave a passionate speech about the power and importance of Torah. There was complete silence as Rabbi Shapiro mesmerized the audience with anecdotes and homilies and divrei Torah. He said that without learning a man is not living.

He went on to describe the power of Torah, including what the Chasam Sofer says that it is decreed how many battles there will be in one’s lifetime. However, it doesn’t say which battle – the struggle could be about debating the words of Abaye and Rava and therefore, there will be fewer wars in the world. That’s why talmedi chachamim are marbim shalom.

The women were acknowledged for inspiring, supporting and encouraging their husbands and children to learn. Thunderous applause went up from the women’s section.

Lazer Lowy of Kosher Classique catering and his team were acknowledged for creating and delivering a tasty menu to over 1,000 guests.

A video presentation was shown at the end of the evening in which participants of Daf Yomi detailed what the learning means to them.

Additionally, the lomdim detailed whom they have benefited from learning Daf Hayomi both academically and socially. With skillful highlights of the night incorporated into the video, a powerful message was left for the audience. It was time to go home and begin the upcoming seven-and-a-half-year journey known as Daf Hayomi.

Melbourne will remember this night for a long time. The inspirational messages, the world class singers and the atmosphere of achdus k’ish echad b’lev echad, when the community comes together for the Torah.

Many lomdei Daf Yomi in Melbourne learnt more than a daf a day in recent months in order to be mesayem earlier. They are now starting amud yomi in Brachos until Jan. 20 when they rejoin the regular Daf Yomi schedule.