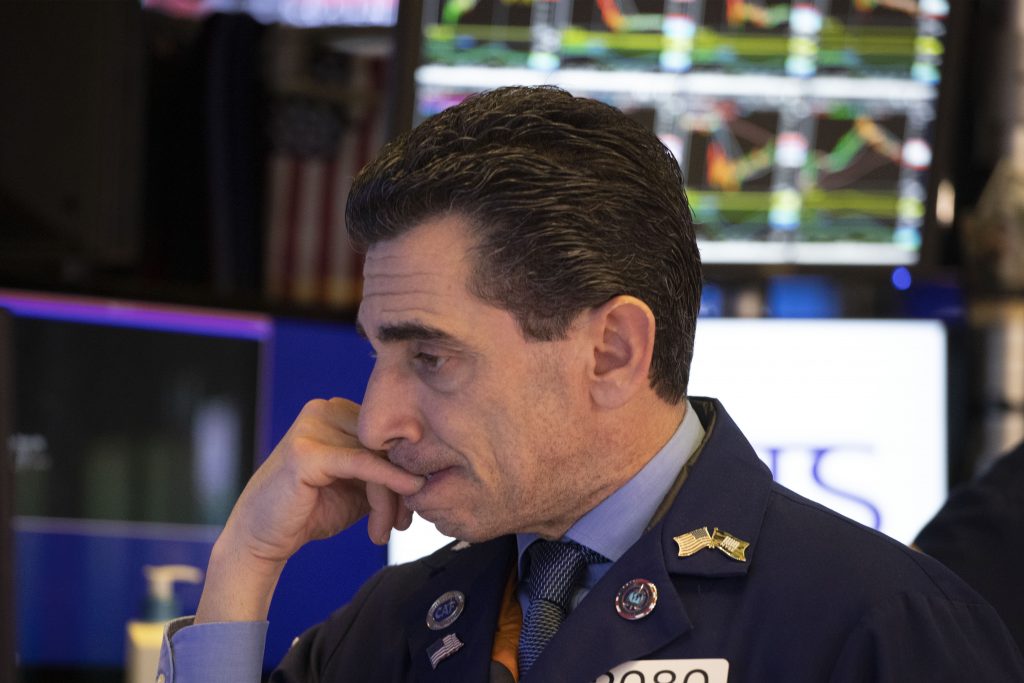 Stocks fell broadly Tuesday after President Donald Trump cast doubt over the potential for a trade deal with China this year and threatened to impose tariffs on French goods.

The selling knocked the Dow Jones Industrial Average nearly 300 points lower and had the S&P 500 on track for its third straight loss as the market continued to give up gains after a strong November rally.

Trump said he has “no deadline” for a deal and didn’t mind waiting until after the 2020 election to make one. Investors had been hoping for a deal this year, or at least enough progress to stave off new U.S. tariffs on Chinese goods, including smartphones and laptops, scheduled to start Dec. 15.

Wall Street is also weighing the potential for an expanded series of trade disputes after a month of relative calm. On Tuesday, Trump proposed tariffs on $2.4 billion in French products in retaliation for a tax on global tech giants including Google, Amazon and Facebook. That follows a threat Monday to raise tariffs on steel and aluminum from Argentina and Brazil.

Technology stocks led the losses. The sector is highly sensitive to twists in the trade dispute because many of the companies rely on China for sales and supply chains. Apple slumped 2.1% and Intel fell 2.8%.

Bank stocks also suffered heavy losses as investors headed for the safety of bonds and pushed yields lower. Banks rely on higher bond yields to charge more lucrative interest rates on mortgages and other loans. The yield on the 10-year Treasury fell sharply to 1.71% from 1.83% late Monday.

Utilities and real estate companies held up the best as investors shifted money to the safe-play sectors.

DECEMBER DIP? The lack of a trade deal before the year ends could mean the market is in for a turnaround from a strong, record-setting November. The S&P 500 had its best month since June with a 3.4% gain because of cooling trade tensions and optimism that a resolution to the dispute was near.

Two days of deflated hopes has already sent the S&P 500 about 1.5% lower and the tech-heavy Nasdaq has slipped 1.8%.

December is a typically solid month for the stock market, with the S&P 500 making gains regularly since the last recession ended in 2009. Last year, though, fears about a recession and rising interest rates hurt the major indexes.

METAL MARRIAGE: Cleveland-Cliffs plunged 9.9% after the iron-ore miner said it will pay $1.1 billion for steel maker AK Steel. U.S. steel producers have struggled since the Trump administration put a 25% steel tariff into place last year. Domestic demand has slumped as oil and gas drillers pull back on purchases of steel pipe. The price for hot rolled steel has slid almost 30% this year. AK Steel rose 3.8%.

DRESSED FOR SUCCESS: Lands’ End vaulted 18.9% after the clothing maker reported surprisingly good fourth-quarter earnings and raised its profit forecast for the year.

ECONOMIC WATCH: Wall Street still has a busy week ahead for some key economic gauges following disappointing manufacturing and construction data on Monday.

Investors will get a better view of the services sector, which makes up the bulk of the economy, with a November report on Wednesday. Economists expect a very slight drop in growth.

Employment data is also on tap this week. On Wednesday, payroll processor ADP will release its latest survey of hiring by private companies. The Labor Department will release its closely watched employment report on Friday.