National Northeast Starts to Dig Out After Snowstorm
National 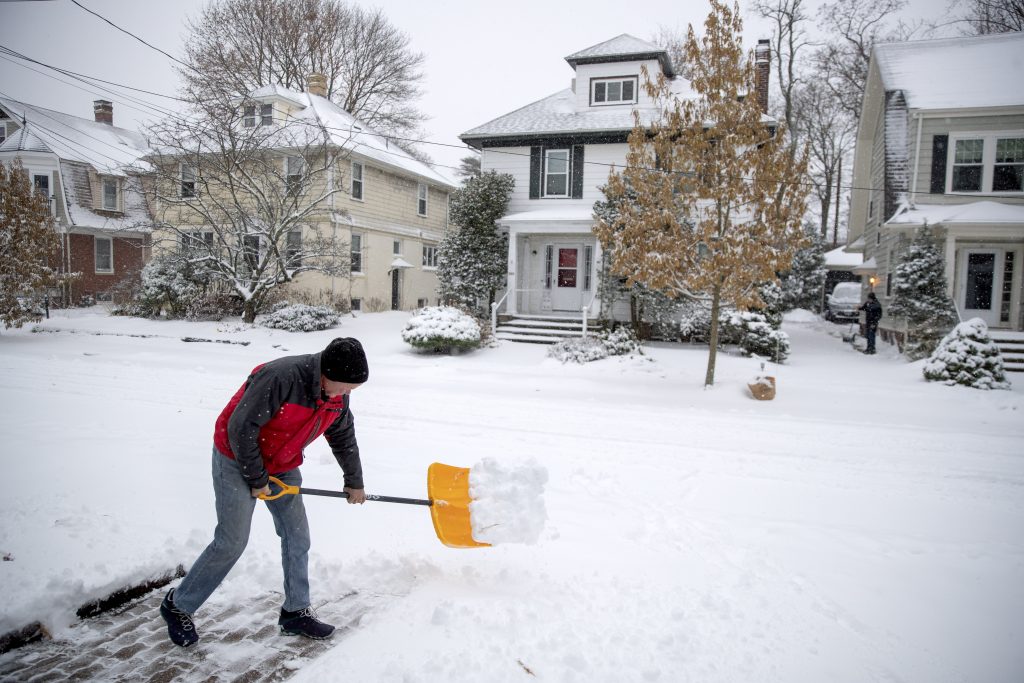 After nearly two days of constant snow in some Northeast cities, the first big snowstorm of the winter is drawing to a close. For many in central and western New England, it dropped close to 2 feet of snow, while a few places saw even more.

Albany, New York, even managed to record one of its top 10 greatest snowstorms, and its biggest storm so early in the winter season.

The snow is set to finally wrap up Tuesday in extreme eastern New England from Downeast Maine to Cape Cod.

The storm has been disruptive. Schools were closed in Boston on Tuesday, where 4 to 8 inches have fallen, and hundreds of flights were delayed or canceled in and out of Boston’s Logan Airport.

The ingredients that gave rise to the hefty snowmaker roared ashore in the Pacific last week. Remember the “bomb cyclone” that lashed Oregon and California after intensifying at twice the rate needed to classify as a bomb? That system was spawned by the same pocket of upper-level energy that drifted east, touching off another storm over the Great Plains and Upper Midwest before transferring the focus offshore of New England.

The flakes started flying in New York on Sunday afternoon, waiting until near dark to coat the ground in the Boston to Providence corridor. Albany recorded its first snowfall during the 1 p.m. hour Sunday. The visibility dropped from 10 miles to a mile in just an hour, with snowfall rates quickly becoming heavy. For the next 38 hours, snow was recorded at the airport finally relenting just before 5 a.m. Tuesday. The city wound up with 22.6 inches, making it their eighth-largest snowstorm on record and the biggest since 1993.

In Lawrence, Massachusetts, the snow continues to fall. They were up to 41 hours straight and still going strong as of 10 a.m. Tuesday. Surprisingly, the city – which has yet to report an official tally – likely only received between 8 and 13 inches.

Farther inland, the snow piled up at a faster clip. Worcester County, Massachusetts, received one of the jackpots – Winchendon saw 25 inches as did Royalston, while Fitchburg piled up 22 inches. It’s been snowing in Worcester, Massachusetts, for 42 hours.

Some areas did experience a lull in precipitation. Manchester, New Hampshire, was snow-free from 5 a.m. to 8 a.m. Monday. Hartford got a reprieve between 4 p.m. and 6 p.m. Monday. (Hartford’s 16.3-inch total marked their biggest snowstorm so early in the season, and their loftiest tally since 2017.)

That brief pause in precipitation was thanks to a “dry slot,” as in some places, the storm unloaded heavy snowfall in two phases.

Before redeveloping northeast of the Delmarva Peninsula, the storm generated an initial round of moderate to heavy snow over eastern New York and interior New England (closer to the coast, mostly rain fell in the initial phase). That’s why the totals from Binghamton to Albany, New York, and parts of interior Massachusetts were so impressive – they received snow from the storm’s two acts, without interruption.

The storm’s opening act even brought thundersnow north of the Massachusetts Turnpike and near Route 2.

Totals from the storm’s first act stacked up to more than a foot for many, especially in the Berkshires. But more was on the way.

After the storm moved over the ocean and began to intensify, the dry slot brought a temporary quiescence over eastern New England. That’s when the storm’s “comma head” began to form.

A “comma head” is the backside of a departing low, the wraparound moisture that collects into a sudden burst of heavy snow and occasional whiteout conditions as northwesterly winds sweep cold air into the system. A well-anticipated comma head began to take shape Monday morning over New York City.

In the Big Apple itself, Central Park got 1.6 inches. La Guardia saw only 0.4. But just 20 miles west of town, Oakland, New Jersey, saw 8 inches. Most of that fell beneath bands characterized by 1-to-2-inch per hour snowfall rates. New York City very narrowly dodged a commuting nightmare Monday afternoon and evening.

Now, the only snow left is mostly east of Interstate 91. Heavy snow continues in Maine, where more than a half foot of additional accumulation is possible near the coast. Two or 3 inches may fall through the evening along the New Hampshire Seacoast, while Boston and eastern Massachusetts may see another inch.

The snow will gradually wind down throughout Tuesday. There’s also a chance that the departing storm clouds to the east could make for a stunning sunset Tuesday evening.